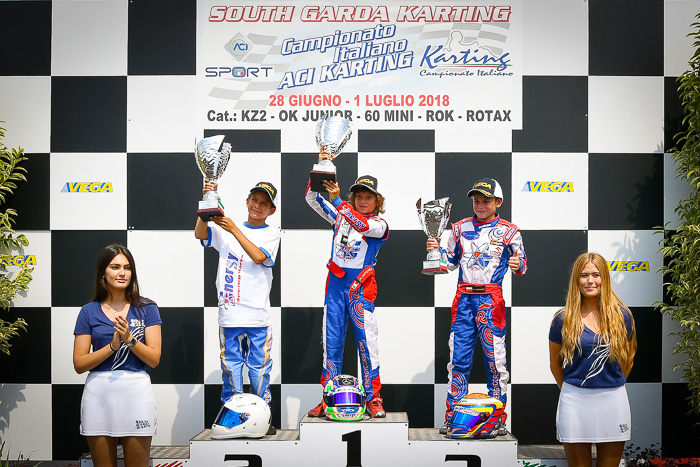 Recognised for its experience in all categories, at every race Energy Corse confirms the effectiveness of its policy of coaching young drivers. Alex Powell and Andrea Kimi Antonelli have recently been impressive in 60 Mini events at the wheel of their Energy-TM package, while Loris Cabirou has shown clear progress in the European OK-Junior Championship.

This year, Energy Corse is again involved in many national and international championships, with successive excellent results. June was particularly fruitful for the drivers of the Italian team, supported by the know-how of the technicians under the management of Mick Panigada.

Antonelli wins at Sarno and Lonato!

On the weekend of 9th and 10th June, Andrea Kimi Antonelli was the best performer of the Italian Championship at Sarno in 60 Mini. The talented Italian came out of the Qualifying Heats in 1st place and confirmed his speed by brilliantly winning Race 1. The duel was back on in Race 2 and Antonelli was 2nd this time, while achieving the fastest lap in the race. Andrea Kimi remains in the title race more than ever. Denmark’s Jonathan Weywadt and Jamaican Alex Powell also led the class, with Alex making a 16-place gain in Race 2.
Racing in Rok Junior with the team Revolution Motorsport, Filippo Croccolino achieved an amazing Race 2 moving up from 11th to 1st place. He unfortunately could not keep this victory because of a spoiler penalty.

On July 1st, the Italian Championship moved towards its climax at Lonato for Energy. Giuseppe Gagliano celebrated in Rok Senior by winning Race 2 after a great comeback. Better still, three drivers in the colours of Energy Corse were on the podium of Race 2 in 60 Mini: the Italian Andrea Kimi Antonelli finished 1st ahead of the promising Serbian Andrej Petrovic and the Pole Karol Pasiewicz (Revolution Motorsport), which had already finished 2nd in Race 1. Three other Energy chassis finished in the top-15: Flavio Olivieri, Alex Powell and Jonathan Weywadt.

A week later, they were several drivers from Energy Corse racing in the German round of the European OK and OK-Junior Championships: Artem Kosarev, Jamie Day (already excellent at the British round at PFI ), Marcel Kuc and Loris Cabirou. This time it was the French driver who got the best result. Cabirou has never left the top 10 in the Qualifying Heats: 9th in Qualifying and 10th after a great run of 6th, 7th, 5th, 7th and 4th! Unfortunately, Loris was caught in a scramble in the Final where he dropped to 22nd. But the driver from the Energy Corse team has certainly completed his best meeting at this level.

Alex Powell on the podium!

Energy Corse once again had a great squad at Lonato at the WSK Open Cup from 22nd to 24th June. In OK-Junior, there were no less than four Energy chassis in the Final: Marcel Kuc, Connor Zilisch (Revolution Motorsport) and Jamie Day, back from 28th to 18th place. In KZ2, Alessandro Pelizzari was on the pace of the best and was 14th in this very hot race three weeks before the European Championship. Swede Isak Sjokvist and Irishman Ross Hayes also qualified for the Finals.

In 60 Mini, the very promising Alex Powell has shown that he has nothing to envy to the top drivers of the category. Although his team-mate Andrea Kimi Antonelli achieved a clear run in the heats by winning four times, Powell finished 3rd in the intermediate, after his 2nd time in Qualifying and successful heats: 2nd, 3rd, 2nd and 1st! Antonelli and Powell then took the top two places in Prefinal A.

The Final was very competitive, with many changes of position. Powell did not let go and had the satisfaction of climbing on the 3rd step of the podium. He also set the absolute best lap of the meeting with 53 “657. Antonelli took 6th place, while Karol Pasiewicz (Revolution Motorsport), Kiril Kutskov and Jonathan Weywadt enlivened the chasing pack on their Energy chassis.