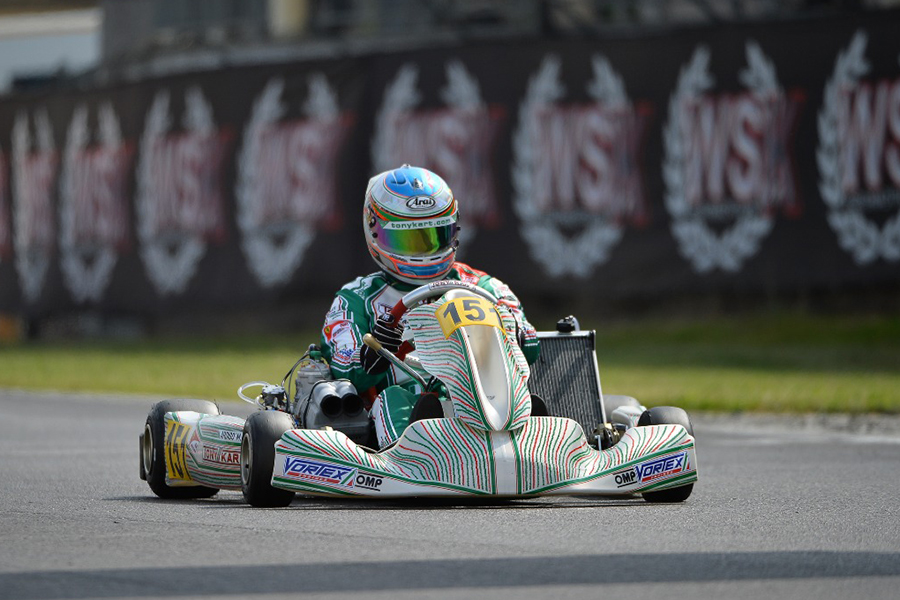 On the occasion of the one-shot WSK Open Cup competition in Lonato, Marco Ardigò kept high the Tony Kart Racing Team’s colors gaining the second position in the final of KZ2 category.

The spotlight on the South Garda Karting in Lonatois off, which track host the WSK Open Cupevent on the weekend of June, 21st-24th. An event that gave so much entertainment as well as action on the track and allowed the Tony Kart Racing Teamto celebrate an excellent weekend, with our colors shining both in the master class, the KZ2, and in the single-speed OK and OK Juniorcategories.

In the shifter category, the protagonist was Marco Ardigò: the 2018 WSK Super Master Series Championsoon led the qualifying heats, gaining two victoriesand a third placethat allowed him to reach the third position at the end of the heats. He has furthermore obtained another success in the A prefinal, where he jumped from the first box on the grid of the final. His start in the decisive race was perfect, however his running on a part of track soiledby his rivals slowed his pace with the result of losing the leadership of the race. Despite this, Ardigò was able to manage the situation, reaching the finish line in a second positionallowing him to win the title of 2018 vice-champion of theWSK Open Cup.

His teammates also performed well: among these Matteo Viganòwho was the most concrete, with a second and a fourth placein the heats, followed by an excellent third position in the A prefinal and the fifth placeunder the checkered flag in the final. Alessandro Giardellialso showed a good performance, with a Top 10 placement in the B prefinal, while a bit unlucky were Alessio Piccini, who did not qualify for the final, and Simo Puhakka, fighting against the leading group in the decisive race but betrayed in the last laps by a few technical problems to his Tony Kart 401S Racerchassis powered by Vortex.

The Tony Kart Racing Team, however, has achieved great satisfaction even in the single-speed categories: in the OKclass, in fact, it was David Vidaleswho climbed on the lowest step of the podium in the final, having constantly confirmed his position in the Top 10 both in the qualifying heats and in the prefinal at the wheel of his Tony Kart 401S Racerchassis powered by Vortex. His teammate Noah Milell, on the other hand, ran in the seventh place under the checkered flag of the decisive race after trying to gain the top positions.

In the OKJ category it was the young driver Nikita Bedrinto highlight the qualities of our chassis: the Russian driver soon distinguished in the qualifying heats with a victory, a third and a fifth place, which was followed by the success in the A prefinal, which allowed him to start in the final from the front row. Here Bedrin fought for the victory until the last lap, running finally under the checkered flag in the third place. Less fortunate his teammates, with Josep Maria Martìout of the Top 10 andSebastian Montoyaforced to retire for a collision that does not do justice to the commitment he showed on the track, which rewarded him with the fourth place in the B prefinal, as the best result of the weekend.

Our drivers engaged in the 60 Mini, namely Rashid Al Dhaheri, Jimmy Helias, Jules Caranta, Igor Cepiland Yuanpu Cui, have finally been able to perfect their experience at the wheel of their Tony Kart Neoschassis powered by Vortexin such an international race, in view of the upcoming commitments of the 2018 season. The Tony Kart Racing Team, on the other hand, will be back on track during the weekend of July 12th-15th, when the second round of the European Championshipfor KZ and KZ2categories will take place on the South Garda Karting in Lonato.