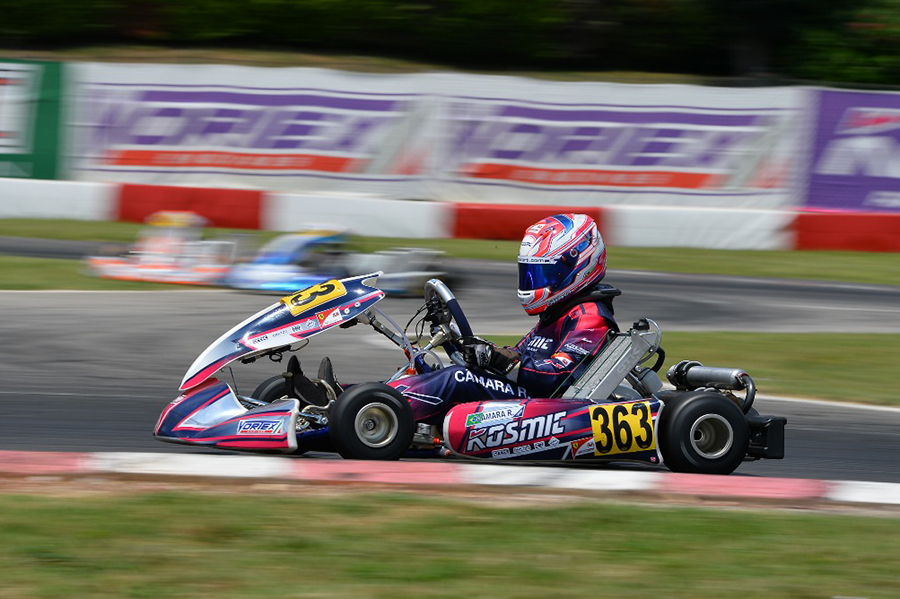 On the occasion of the WSK Open Cup on the South Garda Karting of Lonato, the Kosmic Racing Department showed off with the fourth place of Rafael Camara in the OKJ final.

The WSK Open Cup ended in a positive way for the Kosmic Racing Department, the one-shot event of the 2018 WSK Promotion calendar which was run on the weekend of June 21st-24 that the South Garda Karting circuit of Lonato. An appointment in which our drivers defended themselves to the best, bringing home good results that proved the constant growth of their performance in the current season.

The best result was the one gained by Rafael Camara, who in the OK Junior category was able to best express his talent at the wheel of his Kosmic Mercury S chassis powered by Vortex, taking him to the decisive race in the fourth place. The Brazilian driver’s weekend started in the best way, with the second time in the qualifying from which he then could manage a victory, a second and two fifth place sat the end of the qualifying heats. In B prefinal, however, he could enter in a while in the first ten positions, a result that did not completely satisfy him: for this reason Rafael ran in the final with the maximum motivation to give his best, and in the end he was rewarded with an excellent fourth place thanks to which he can now lay the starting point to do even better in the next engagements of the season.

In the OK category, the colors of the Kosmic Racing Department were held high by the pair formed by Roman Stanek and David Rozenfeld. After having reached the sixth absolute time in qualifying, Stanek was able to gain his best result with the eighth place at the end of the qualifying heats, while in the prefinal and in the final he crossed the checkered flag respectively in tenth and ninth position. His teammate David Rozenfeld, on the other hand, closed the decisive race of the weekend in 16th place.

Results that cannot be accepted by them considering what they have shown on track and similar to those obtained by our drivers who have raced in the master class. In KZ2 class the expert driver Patrik Hajek started the weekend on the right foot, thanks to a second place in the eliminatory heats followed by constant top 10 placements. In the A prefinal, he managed to reach the fifth place, but unfortunately he could not repeat this success in the final where he finished his race in tenth place, right in front of his teammate Oliver Rasmussen.

In any case, the WSK Open Cuporganized by the WSK Promotion was useful to test the skills of our drivers in an international race: it will be useful, therefore, also to Axel Bengtsson and Paul Evrard, who will be able to put into practice what they learned, in the next commitment of the Kosmic Racing Department, that is to say the second round of the European Championship for KZ and KZ2class scheduled for the weekend of July, 12th-15thon the South Garda Karting circuit of Lonato.