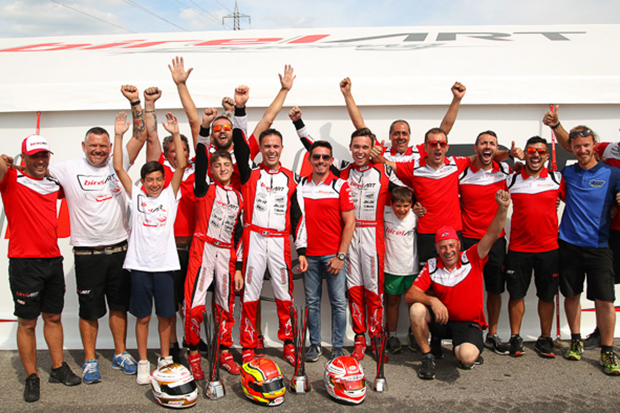 The Birel ART chassis with TM Racing engines have finally won the laurels they have deserved since the at the WSK Open Cup on the Lonato track. Winning an indisputable victory in KZ2 with Riccardo Longhi and completing this success by Marijn Kremers’ 3rd place is an invaluable reward for Birel ART on the circuit where the last round of the European Championship will be disputed in a few weeks. The progress of the Lissone team was also confirmed with the success of Luigi Coluccio OK.

“I can not hide my satisfaction!” exclaimed Davide Foré, the Birel ART team manager on the evening of the WSK Open Cup. “I am very happy for our drivers and for the team that worked hard this year. We have always been confident in the potential of our 2018 chassis, but we lacked the proof of a victory so far. I think this is an important step for all and that the successes achieved in the face of competition on the Lonato track are an extremely positive sign for the rest of the season. In addition to the continuous efforts of drivers and technicians, I would like to salute the work of our engine builders, Daldosso in KZ2 and Machac Motors in OK, who allowed us to extract the best TM Racing mechanics. We can not wait to confirm this in the European Championship, especially with Longhi, well placed in the provisional ranking in KZ2.”

Longhi the king of Lonato
In front of the best of the KZ drivers, Riccardo Longhi took advantage of the excellent competitiveness of his Birel ART / TM to post a series of exceptional performances. After taking pole position in Qualifying, Longhi ensured solid heats with several 2nd places before giving his all in the final stages. Winner of Prefinal B with the fastest lap in the race, he achieved an extraordinary start to finish win with a lead over the top KZ specialists while being once again the fastest on the track. Marijn Kremers was also one of the stars of the WSK Open Cup as he completed the success of Birel ART on the third step of the podium with excellent times.

A day of glory for Coluccio
For his first season in the OK category, the young Luigi Coluccio had already achieved some very good performances in 2018. His remarkable performance at Lonato finally brought him the expected success. At the wheel of a very effective kart, he was able to express all his talent against formidable opponents. Starting from the third fastest time, he had two good runs, but lost time in the last one. This did not prevent him from returning to the forefront and winning the Prefinal by passing decisively on the last lap. He then led the Final from start to finish and scored a great win more than 2” in front of his rivals.

With these significant successes, the Birel ART Racing team will approach the second part of the season with winning morale to highlight the quality of its chassis at all levels. The next important event will take place at the same circuit of Lonato in mid-July, for the conclusion of the CIK-FIA KZ and KZ2 European Championships.