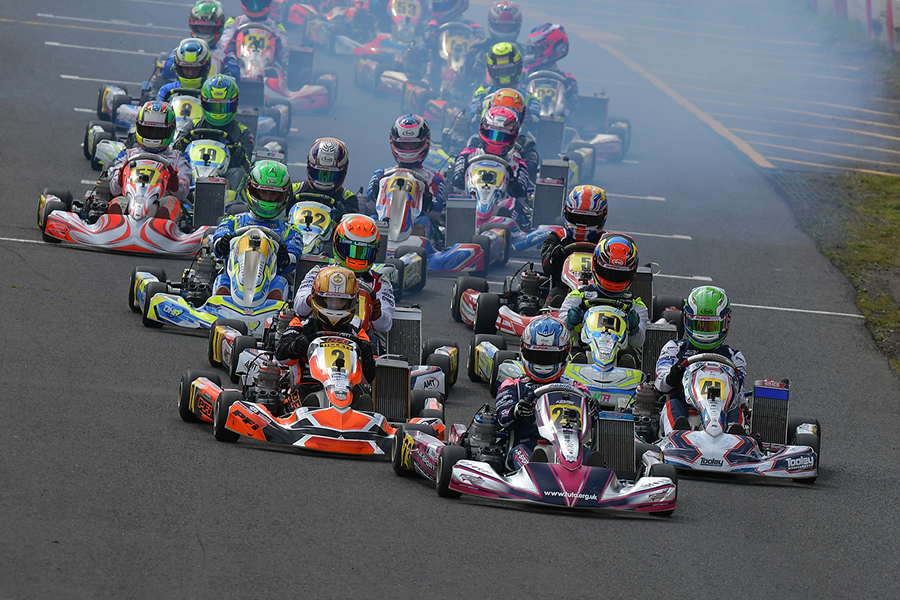 The fifth round of the Tuto Super One Series took place at Rowrah in Cumbria with some excellent racing in wet and dry.

Event hosts Cumbria Kart Racing Club donated the proceeds of an extra Friday practice session to Bambino driver Ben Clark’s charity, which collects, washes and resells microfibre cloths to raise money for Leicester Royal Infirmary’s children’s ward. Along with generous donations from many in the paddock he has now raised over £1000. Find out more at https://www.facebook.com/BenjaminClarkRacing/.

This time, all the racing took place on Saturday and Sunday and Saturday’s Qualifying and heats mainly took place on a wet or drying track. On Sunday the weather was dry until the second Finals with rain starting for the first class out, Mini X.

All of these categories will be out next at Shenington in Oxfordshire on 21st-22nd July.

Maxwell Dodds topped Timed Qualifying ahead of Arvid Lindblad, William MacIntyre and Freddie Slater but the heat wins went to MacIntyre and Lindblad, leaving Dodds in 3rd on the Final 1 grid. Slater was penalised in one of the heats so ended up 17th.

Dodds won Final 1 in a race that included a yellow flag period, pulling away from MacIntyre towards the end. Vinnie Phillips moved up four places to 3rd in mid-race but poleman Lindblad moved up a mighty 17 places to 5th behind Harley Keeble after dropping back at the start.

Final 2 went to MacIntyre after battling early leader Phillips, Dodds and Lindblad. Slater set the fastest lap and gained 24 places to 4th after a disqualification in Final 1.

In the Championship, Lindblad is the leader, four points ahead of Dodds with a slightly bigger gap to MacIntyre, and Slater 4th with even more ground to make up.

Alex Lloyd headed the wet Qualifying session half a second ahead of Lewis Thompson with Dragan Pinsent 3rd, but Reggie Duhy took pole for Final 1 with two 2nd places in the heats. Thompson ended up 2nd on the grid and Axel LaFlamme 3rd, with the wins going to Thompson and Pinsent.

LaFlamme narrowly won against Lewis Gilbert in Final 1 after Thompson was forced to retire from the lead battle with five laps to go. This incident also promoted Duhy to the podium.

In Final 2 Duhy took the lead from LaFlamme early on and held it throughout, but was disqualified and holds the position under appeal. Clayton Ravenscroft moved up from 5th on the grid to 2nd and was reeling Duhy in at the end with Gilbert a solid 3rd.

Ravenscroft still leads the Championship 19 points ahead of Gilbert with Pinsent 3rd, but the standings are provisional pending Duhy’s appeal.

Joe Turney led Timed Qualifying ahead of Sean Butcher and Elliot Harvey, and Turney kept the lead after the heats with a 1st and a 2nd. Rory Hudson moved up to 2nd and Oliver Hodgson 3rd, while the other heat winner Harvey was down in 7th after a penalty in Heat 2.

Hodgson took the lead at the start of Final 1 ahead of poleman Turney while Bradley Pennell passed Hudson on the second lap. There the positions stayed until the end although Hodgson never managed to shake off Turney.

Turney took the lead three laps into Final 2 ahead of Hodgson, from whom he pulled away. Paul Stewart overcame Hodgson for 2nd but was penalised after the race for driving standards, giving 2nd to Morgan Porter ahead of Hodgson.

Turney is the Championship leader seven points ahead of Porter, with three rounds to go. Hodgson is 19 points back in 3rd.

Alexander Page topped the wet Qualifying session, three tenths faster than reigning Champion Abbi Pulling and Max Davies. Pulling and Butterworth took the heat wins but Pulling was down in 6th after dropping back in the difficult conditions of Heat 2. Davies was to start 2nd on the Final 1 grid and Zak Oates 3rd.

Butterworth won Final 1 almost five seconds ahead of Spencer Stevenson after leading throughout the race. Stevenson passed Pulling on the last lap after working his way through from 7th on the grid. Connor Kearney was 2nd for a time but crossed the line in 4th.

Stevenson made the best start in Final 2 but was overtaken by Pulling after five laps, followed through by Archie Strong. Strong spent the rest of the race in Pulling’s wheeltracks before overtaking her, again on the last lap.

Kyle Sproat took pole ahead of the 40 competitors in the two wet sessions, and the significant differences between the sessions meant the times were alternated. Joe Stockford was 2nd and Robert Welham 3rd. Sproat retained the lead in the heats after a win and a 2nd, Harry Moore was 2nd and Lewis Wadley 3rd, and the other heat winners were John Hogan and Joe Fowler.

Sproat took the lead from pole in Final 1 but Wadley soon overtook before Fowler’s decisive move at half-distance secured him the win by 0.15s. Moore, who had briefly been in the lead, finished 3rd and Sproat dropped to 7th.

Sproat had his revenge in the wet Final 2 with a win ahead of Moore and Fowler after they passed early leader Adam Sparrow. Once ahead, Sproat was able to pull away.

Sparrow is still in the lead of the Championship 21 points ahead of Fowler, with another gap to Lee Whittingham.

Qualifying for the two sessions took place on a wet track and Sebastian Bloch prevailed, 0.07s ahead of Sonny Smith with Alfie Rigby 3rd. Bloch stayed ahead after the heats with 1st and 2nd with Oliver Greenall moving up from 5th in Qualifying to 2nd with two 2nd places. The other heat wins went to Rigby and Theo Micouris.

Daniel Guinchard won Final 1 after moving up from 8th on the grid. He made a good start to join the lead pack and passed Bloch with five laps to go with Greenall following him through a lap later. Rigby, who had briefly been in the lead earlier in the race, followed Greenall closely and their last-lap battle allowed Guinchard to win comfortably.

Guinchard repeated his success in Final 2, now on a wet track, after a last-lap move. Rigby took the lead at the start before Greenall overtook him and led most of the race with Guinchard behind him waiting for an opportunity. After his opportunity came, Micouris was also able to overtake and finished 2nd with Rigby coming in 3rd.

Rigby is now the Championship leader but is just one point ahead of Guinchard with quite a large gap to Bloch. However, the points are provisional as Bloch has appealed against a penalty in his second heat and is awaiting an MSA National Court hearing.

Joshua Rowledge took pole on a damp track from Joshua McLean and Jessica Edgar, and the two Joshuas shared the heat wins. Rashan Chigorimbo was 2nd on the Final 1 grid with Edgar 3rd ahead of McLean.

Final 1 was still dry and saw several lead changes and penalties but in the end Rowledge prevailed. McLean took the lead at the start at the front of a battle between himself, Edgar and Rowledge where all three had a turn in the lead. Edgar was penalised for driving standards after the finish but had dropped back anyway, leaving the third step on the podium to Ivan Lomliev.

It started to rain for Final 2 and Jacob McComb was the only driver to go out on wets. He was 6s a lap faster than the rest so lapped them all logically enough. Chigorimbo finished 2nd and Lomliev 3rd after all the penalties had been handed out.