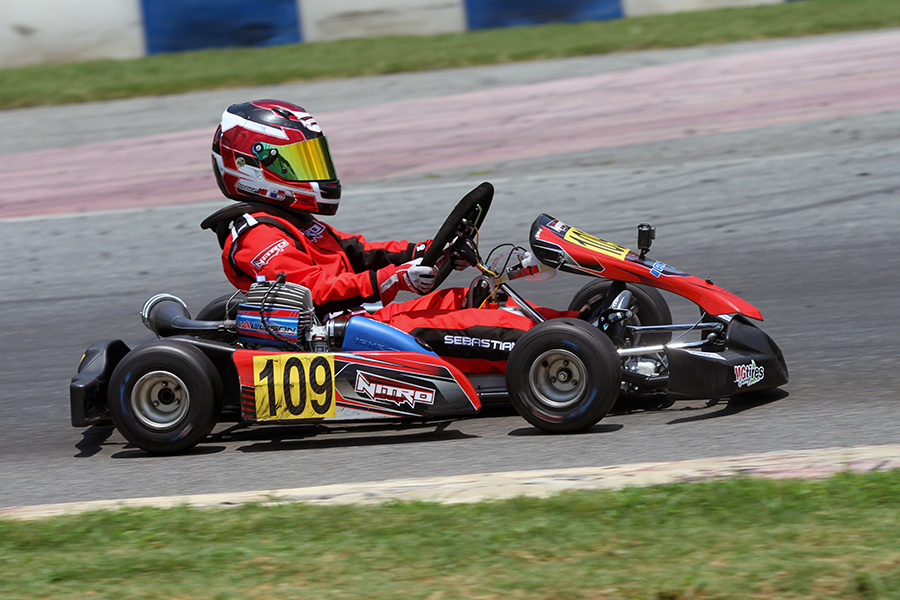 One of the rising stars in Cadet karting today is Sebastian Ng. The 11-year-old driver from Panama is enjoying great success in his first season of Mini Swift racing after a solid career at the Micro Swift level, including several victories and podium finishes. This past weekend, Sebastian made his 2018 United States Pro Kart Series debut, contesting the Carolina Grand Prix at the GoPro Motorplex in Mooresville, North Carolina. Ng used the advantage of the home track for his Nitro Kart race team to be among the top contenders all weekend long, leaving with two top-five finishes and his first USPKS victory of 2018.

The weekend began with Sebastian qualifying fourth for Saturday’s round of racing. The top-four were separated by just 69 thousandths of a second, showing the tough competition in the 18-driver field. The opening heat race, Ng partnered up with fellow Nitro Kart driver Adam Brickley to get away from the field, with Sebastian coming away with the race win. The second heat race, Ng ran second to fellow Nitro Kart driver Brent Crews for the entire 11-lap run, missing out on the win at the finish line. Ng partnered up with Brickley once again in the Final, and the two pulled away from the field. Sebastian was able to take the lead on the final circuit, and reach the checkered flag first for the victory. 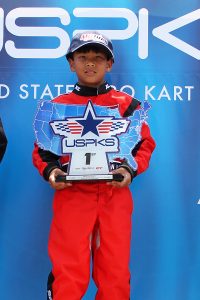 Sunday began with Sebastian in the middle of the field after qualifying, sitting eighth to put him on the outside of row four for the Prefinal. It was a busy 13-lap race that saw Ng in a different position on every lap. At the checkered, Sebastian was in the fourth position to solidify a great starting spot for the main event. Ng put himself into the lead pack for the 20-lap Final where he spent much of the time in the second position. On the final lap, Sebastian took over the lead and was one corner away from a second victory. A late apex gave room for a train of drivers to slip past on the final turn, as Sebastian slipped from first to fourth by the checkered flag.

“Sebastian was in top form all weekend from the first practice session, to the last checkered flag with marginally missing out on a double win weekend,” stated Nitro Kart owner Nick Tucker. “I couldn’t be more proud of how fast he has adapted to the Mini category in his first year and look for more strong results from him.”

In addition to racing in his Nitro Kart at the GoPro Motorplex, Sebastian continued racing Saturday evening at the Millbridge Speedway in a dirt kart. He started last in his heat race by missing qualifying and advanced to eighth. Started eighth in the feature, Ng drove to second with a few laps to go. He tried to pass for the lead when he hooked a cone and fell back to fourth at the finish. It was a great result in only his second dirt race ever.

Sebastian will continue his development with training and working with the Nitro Kart operation with a big trip scheduled for July. At the end of the month, Ng is set to compete at the Italian ACI Karting Championship event on the Adria Karting Raceway in northern Italy. A special thank you to his mechanic on the weekend in Mooresville, Ponyracing from Panama.

Sebasitan would like to thank the following companies for their support toward his racing program; Granma POPO from Cremapan, Pirate Kart Racing, Orillac-Calvo Clinic, Arrendadora Economica, PonyRacing, Nitro Kart, and Allison Racing Engines. Visit the Sebastian Ng 109 Facebook page to follow his progress throughout 2018.