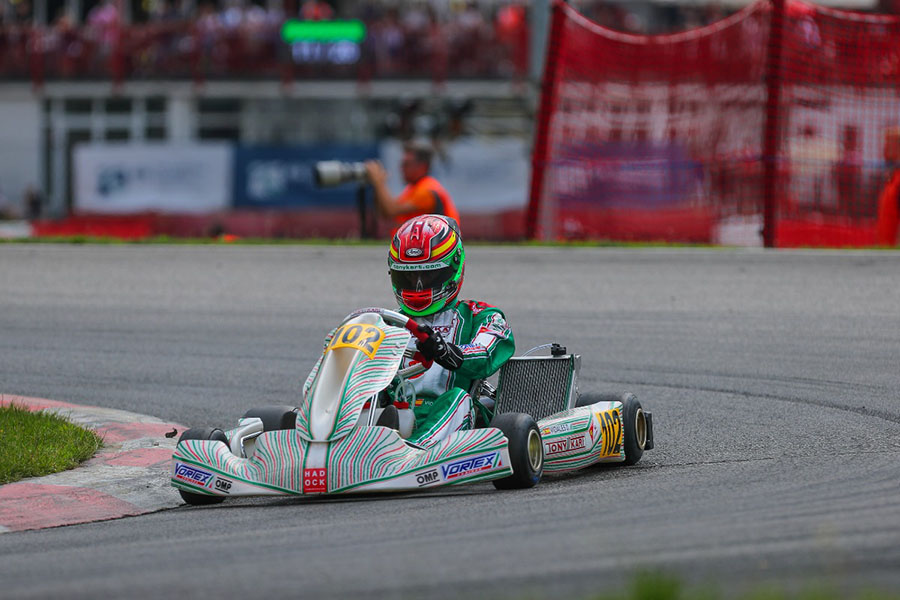 On the occasion of the third round of the FIA Karting European Championship reserved for OK-OKJ categories on the German Ampfing circuit, the Tony Kart Racing Team proved to be extremely competitive.

The curtain falls on the German circuit of Ampfing, theater of the Kart Grand Prix – Germany, the third (of four) appointmentof the FIA Karting European Championshipfor the single-speed categories OK and OKJ. A round full of action on the track and very positive for the Tony Kart Racing Team, who posted excellent results in both the Senior and Junior classes.

The most concrete placement was the one centered by David Vidalesin the OK category: despite a difficult qualifying that saw him in a definitely uncomfortable position, the Spanish driver is able to recover during the eliminatory heats, where he is able to bring his Tony Kart 401S Racer chassis powered by Vortexconstantly in the Top 10 up, to climb on the lowest step of the podium. This deserved him the ninth position on the grid for the final: here David jumps well and immediately attacks the leading group, confirming a fifth placethat he will then defend until the checkered flag.
This placement allows Vidales to maintain his fourth position in the general ranking.

Little luck, however, for his teammate Noah Milell: the Swedish driver progressively improves in the qualifying heats, centering the Top 10 every time until reaching the third place as best result. This way, he manages to qualify in 14th position for the final category, where however he is victim of a technical problem after only six laps, vanishing all the work shown during the entire weekend.

In the OKJ categorythe weekend of the new Tony Kart Racing Team’s driver, Nikita Bedrin, begins in the best way: the Russian driver immediately hits the third time in Friday’s qualifying heats, while in Saturday’s eliminatory heats he gains two victories, a second and fifth place. Thanks to these results, he conquers the ninth box on the grid for the final, where he tries a comeback to the positions that count: the tussle in the middle of the group, however, prevents him from achieving his intent and at the end his race ends in the 21stplace under the checkered flag.

His teammate Laurens Van Hoepen performs better than him, always in Top 10 in the eliminatory heats (where among other things he also gains a valuable third place) and able in the finalto finish his race in 11thposition. Unlucky, however, Sebastian Montoya and Josep Maria Martì, able to put on the wall encouraging results in the top ten of the qualifying heat, however, are not enough to take part in the final.

What was done on the German circuit of Ampfing, in any case, will serve everyone as an experience in view of the upcoming engagement of the Tony Kart Racing Team, which will run on the weekend of June 21st-24th on the South Garda Karting of Lonatoat the WSK Open Cup organized by WSK Promotion.