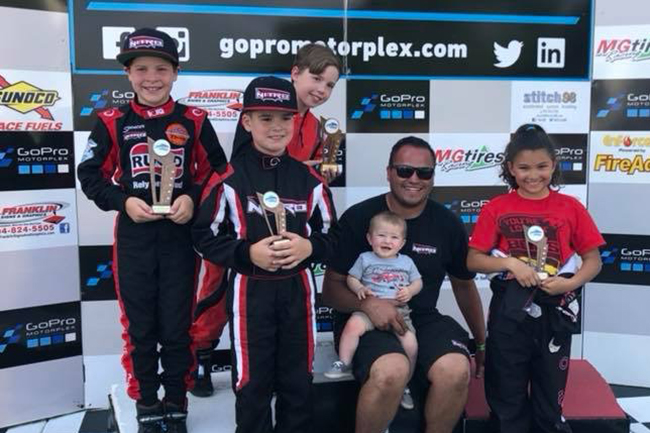 Unlike the last race weekend of the GoPro Karting Challenge, which was soggy and dark, with the finals being run late into the evening, Round 6 was sunny and very warm, and the racing matched the hot temperatures. Again, there were almost 150 entries for this event, which would mark the halfway point of the 2018 Karting Challenge. Team Nitro Kart had a full contingent of eager racers under the tent and they continued to pile on the wins and podium finishes.

Team Nitro Kart’s Sofia D’Arrigo has been very fast lately, and this race was no different. Sofia qualified 2nd, missing pole by only two-hundredths of a second to Bree Miller, and she would go on to win the Pre-Final, giving her pole position for the Final. Sofia led early in the final but Danny Dyszelski was able to slip by at the hairpin Turn 8 on lap one. Sofia stayed within striking distance throughout the race, but came up short by half a second at the finish to place 2nd. Team Nitro Kart’s Cash Wyke rounded out the podium with a strong 3rd place while Nitro Kart racers filled 7 of the top 10 positions, with Adam Brickley in 4th, Ben Maier 5th, James Overbeck 6th, Spencer Conrad 7th, and Christopher McKeithan in 9th.

The Mini Swift division in the Karting Challenge has been a Nitro Kart-dominated affair this season, with “Scorchin’” Spencer Conrad being the driver to beat at most races. Spencer would make the clean sweep at this race, with pole in qualifying, and wins in the Pre-Final and Final. Conrad was able to gap the field in the Final, and the results showed Nitro Kart driver Mason Cantrell in 2nd, with Ayden Patty in 4th and Nitro Kart pilot Jordan Sherwood rounding out the top-5. Patty had finished 2nd on the road, 4.6 seconds behind Conrad, but was docked for a tramline infraction at the start.

The Swift division featured one of the best races of the day and Team Nitro Kart’s Sofia D’Arrigo was again very fast, scoring pole position and finishing 2nd in the Pre-Final to Paige Crawford. In the Final, Sofia led early over teammates Ben Maier, Alex Delemo III, and Adam Brickley, On lap 2, Sofia was edged wide in the Turn 4 bowl, and dropped back to 4th as Maier took the point, with Delemo and Brickley in tow. Delemo passed Maier into Turn 1 on lap 3 and the pair would trade the lead back and forth. Entering lap 5, the leading 7 karts had bunched up coming out of the last corner and up the front straight, and contact was made going into Turn 1 that dropped both Maier and Delemo back in the pack. Ben bore the brunt of it as he dropped all the way back to 10th place, with Alex around 5th. Adam Brickley then took the lead with Sofia 2nd and Team Nitro Kart stalwart Brent Crews joining the party in 3rd. Brickley would lead until just past halfway when Crews took the lead going into Turn 1, bringing Paige Crawford along with him and demoting Brickley to 3rd. Brickley wasn’t  done yet, and took the lead back on lap 9, but Crews reclaimed it again on lap 10 of 13. Brent and Adam then ran nose-to-tail until the top 3 bunched up at the hairpin Turn 8 on the last lap, with Crews running a defensive line and Paige Crawford sneaking inside Brickley for 2nd place. The ensuing 3-wide drag race to the line saw Crews come out on top ahead of Crawford, by five-hundredths of a second with Brickley a similar distance behind in 3rd place. Alex Delemo would come across the line 4th place with Sofia D’Arrigo in 5th.

The KA100 Junior class in the Karting Challenge has become very popular and hyper-competitive. Team Nitro Kart’s representatives in the division, Jacob Graham and Hayden Jones, started the day off well, qualifying 3rd and 4th place respectively in the 18-kart field. The Final would see Graham engaged in the battle for the lead, running as high as 2nd with 3 laps to go. At the flag, Graham was 5th with Jones in 7th place.

Nitro Kart-supported, Fullerton USA driver Blake Hunt continued his very impressive season on the Fullerton chassis, with 2nd place in qualifying and a sweep of the Pre-Final and Final wins.

Team Nitro Kart’s next event will be Rounds 3 & 4 of the United States Pro Kart Series (USPKS) at GoPro Motorplex on June 15th-17th. Team Nitro Kart is fired up and prepared to score more national wins and podiums at their home track but the competition will be tough, as always.

Nitro Kart is based out of Mooresville, NC; the hub of American motorsports. The company was founded by “Nitro” Nick Tucker with a sole focus on youth karting and specifically the cadet ranks, but has now expanded to serve kart racers of all ages. Nick has applied his years of experience from karting all the way up through NASCAR racing to develop the absolute best cadet chassis on the market with the support to back it up. Nitro Kart and their drivers consistently score prestigious victories in major events around the country, hence the slogan “Race One or Chase One.” For more information on Nitro Kart, contact Nick Tucker at (704) 818-7868 or kartworxracing@gmail.com`