Historic event rekindled at The Park after 17 years 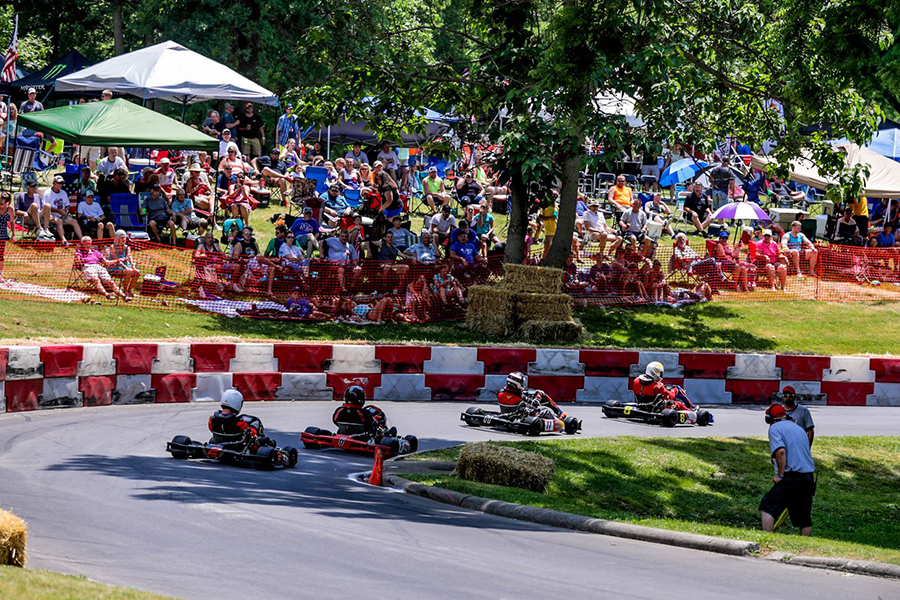 Thousands of spectators welcomed back the Quincy Grand Prix at The Park (Photo: Mark Schwigen)

For 32 years, the South Park in Quincy, Illinois welcomed karters from all over the country to take part in the ‘Grand Prix of Karting’. This unique street course utilized the pavement laid out in the city park, feature elevation changes, challenging corners and of course the famed walls that surrounded certain sections. Under the eyes of Gus Traeder, The Park was a fan-favorite for locals to enjoy racing once a year, and a chance for karters to push the limits in front of spectators. This past weekend, Gus’s son Terry Traeder completed his task of re-establishing the Quincy Grand Prix. A total of 302 entries, including the Saturday Sprints and Vintage classes, filled up the two-day of competition on the 1.125-mile course, with thousands of spectators surrounding the circuit throughout the weekend.

The Quincy Grand Prix is full of history, nothing more unique than that of Mike Birdsell. The longtime karting veteran was the only driver to compete in all 32 previous events at The Park, and made history with his return behind the wheel in a Margay Ignite machine to make it 33 straight Quincy GP events. Former winners and racers Rick Fulks and Jason Ludwig, a Quincy native, were among the many race director and staff members returning back to The Park. Of course, the most famous former racers of the Quincy Grand Prix to return this year was that of Scott Pruett. The legendary sportscar driver acted as brand ambassador and driver mentor for Team Margay. Pruett’s karting history dates back many decades at the kart track in Quincy, along with many laps around The Park. 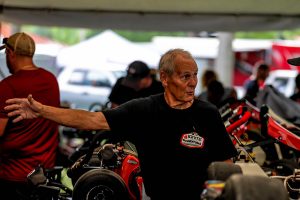 Mike Birdsell is the only driver to compete in all 33 editions of the Quincy Grand Prix (Photo: Mark Schwigen)

To honor Mr. Gus Traeder, the karting promotions innovator and creator of the Quincy Grand Prix, the 2018 winners were awarded with a new coveted trophy that will be the envy of every karters mantel – the Gussie. The trophy is a sculpture of Gus holding the checkered flag, something he loved to wave at each and every event. Pruett was also honored by the city of Quincy, Illinois Friday evening with a key to the city and awarded the first ever ‘Gussie’ trophy.

“An over the top success for the 2018 Grand Prix. The city of Quincy turned out in great numbers with an estimated 8,000 spectators on Saturday and over 10,000 on Sunday,” stated race promoter Terry Traeder. “The drivers loved how smooth the racing surface was and the how safely the track was prepared. In light of the great success of this year’s race, it has been decided to hold the race again in 2019 on the dates June 8-9.  We hope all karters will come and experience this amazing track and race.”

The big winner of the 2018 edition of the race was veteran Tony Neilson, scoring three of the ‘Gussie’ trophy. Neilson is no stranger to the ‘Ironman’ role in karting, having won a historic six races at the Rock Island Grand Prix in 2015. At his return to Quincy, Neilson took on six categories and came away with a victory in half. The first came in the Yamaha Masters class after scoring top-five finishes in Briggs 206 Medium and Yamaha Medium to start the day. The Iowa driver followed it up with wins in Briggs 206 Heavy (the largest class of the event at 29 entries) and Briggs 206 Masters before a sixth top-five finish in Yamaha Heavy. 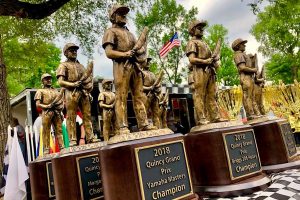 “It has still not sunk in as far as being a 3 time park winner and be listed with some of the best on the list of winners,” commented Neilson. “This was the second time I had ever raced there, the first time was in the early 90s. Winning a Gussie is close to the top as far as my racing highlights, next to getting my first win at Rock Island with my dad and then winning 6 in 2015. But to win 3 is amazing and mainly because of what The Park means to Scott and Clarence Evans. I thought the race was amazing and safe, very well put on.  The Miles family did an amazing job getting the track ready, Rick Fulks was a great race director with his team of officials, and the Traeder family for keeping on a legacy for Gus.”

The quickest categories on the track were the shifterkarts. Many historic names took part in the first years of shifterkart racing at Quincy, including Alex Barron, Alan Rudolph, and many others. Joe Ruch can add his name to the history book as the newest winner in the 125cc Shifter class. Ruch was able to hold off Zach Schiff for the victory at the line. Ruch’s on-board video has caught fire on social media following the event. His quickest lap of the race was a 1:01.510. Fellow Hoosier driver Devon Smith-Harden ran away with the victory in the 80cc Shifter category.

“Quincy was incredible,” said Ruch. “The track, the town, the crowd and the staff and crew putting it on we’re all top notch. This is event needs to be on everyone’s bucket list if it’s not already. I knew going into the event we were showing up with a chance to win with new power from my DR Kart / Fisher Racing Engines Modena. Zach really nailed the set up for the final. It was a great race and once he got around me I thought if I could stay on his rear bumper I would be able to draft around him on the over 1000 foot straight away before the last corner. I got a good run on him and did just that and drove it in deep to the final turn and made it stick. More than anything I want to thank the thousands of fans that were surrounding the entire track to watch us put on a good show. After the race Devon and I got to ride in the back of a pick up on a victory lap and the entire crowd was going crazy, that was one of the coolest parts of the whole weekend.” 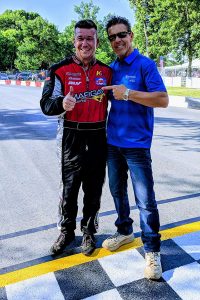 Two former winners at The Park were able to rekindle that magic in the event’s return. Michael Welsh had two victories in the 2000 race, winning in Yamaha Senior Sportsman Medium and Yamaha Super Sportsman Medium. The Medium theme continued with Welsh holding off a pack of five at the line for his third career Quincy victory, just after flipping his Briggs kart the race prior. Among that pack fighting for the win in Medium was Todd Bolton. A longtime karter and also a two-time winner at Quincy, Bolton scored the emotional victory in Yamaha Heavy. Bolton won twice at the last event in 2001 (Yamaha Pipe Heavy, Yamaha Senior Sportsman Medium).

“It was absolutely amazing to be back at The Park,” stated Bolton. “This third win means everything. I lost 120lbs to run this race and compete! The circuit is super smooth, and made for super fast lap times. The draft was everything in our classes, and thankfully we had the fastest karts all weekend.”

The Briggs 206 package made its Quincy Grand Prix debut. Along with Neilson, Riley Scott and Jerry Miller added their names to the long list of The Park winners. Scott beat out Eli Fox in the Briggs 206 Medium division while Miller ran away with the victory in the Briggs 206 Super Masters class.

One of the biggest categories of the weekend was the Margay Ignite Senior class, also powered by Briggs & Stratton 206 powerplant. Veteran racer and general manager at Gateway Kartplex Keith Scharf fought off the competitive field to earn his first victory at The Park, etching his name in history. He can up one spot sort to make it two wins on the weekend, as Colin Predith scored the victory in the Margay Ignite Masters class. Margay owner Keith Freber, one of the driving forces behind the return of the Quincy Grand Prix, finished third.

“What a weekend, outstanding in every regard! From the track preparation to the support from the Quincy community to the racers enthusiasm and finally to the racing itself, it was simply outstanding,” stated Freber. “There was a lot of hard work put into bringing this epic event back to life and those efforts paid off.  302 entries and more spectators than I have ever seen in the park just encourages the Quincy Grand Prix team to work even harder for next year. We had a terrific weekend as our Margay team drivers once again got the job done! Michael Dittmer, Tony Neilson, Pete Vetter, Keith Scharf and Colin Predith combined for eight wins and we had 80 entries across our three Ignite classes. If you can only make one race a year, this is the one.  We hope to see everyone at The Park in 2019!” 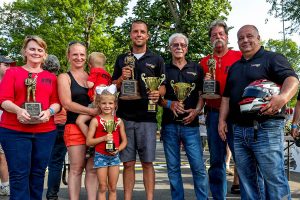 Tony Neilson with family and crew, showing off his hardware from the 2018 Quincy Grand Prix (Photo: Mark Schwigen)

Racing got underway with the Saturday Sprints that followed the opening ceremonies close out the action on Day One. ‘Pistol’ Pete Vetter, an eight-time winner at Quincy in the first 32 years of the event came back to win the opening Saturday Sprint in the Margay Ignite category. Michael Dittmer added his name to the list of racers to win at both RIGP and Quincy with his victory in the Yamaha Heavy Saturday Sprint. Jeff Scott became the inaugural winner in the Briggs 206 Heavy Saturday Sprint event to open up the racing on the weekend.

The Quincy Grand Prix has given street racing a great shot in the arm for the karting community. Many racers from the past, not currently in the sport, returned for a chance to race The Park once again. Street racing is done around the country and around the world, and provides the sport a great opportunity to promote the sport for what it truly is – a fun, family activity and the purest form of motorsports.