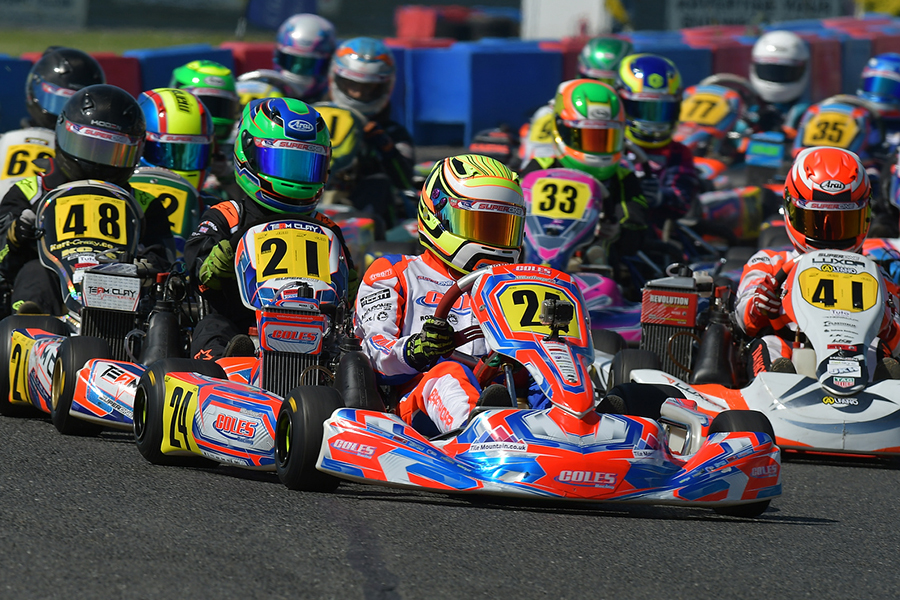 The fourth round of the 2018 season saw high temperatures on Sunday at the fast Dorset track and some great racing, particularly in the TKM classes. Honda Cadet and the three Rotax Max classes were also on the programme.

Honda Cadet, TKM Extreme and Senior Max all had entries big enough for a Repechage and numbers in the other classes remained more than respectable, to give a total of 237 entries for the weekend.

Honda Cadet and the TKMs will now head to Rowrah at the opposite end of the country in less than two weeks time to join the X30s for the next round.

Abbi Pulling took pole, 0.08s ahead of Spencer Stevenson and 0.12s ahead of Ben Watson, with arch-rival Daniel Butterworth in 4th. Pulling won Heat 1 on Saturday half a second ahead of Butterworth, then on Sunday morning Archie Strong beat them both. Pulling did however keep pole for Final 1 on equal points with Butterworth but Qualifying as the tiebreaker.

Butterworth leapfrogged into the lead at the start of Final 1 but was soon repassed by Pulling before he briefly retook the lead. The latter half of the race was marked by a lead battle between Spencer Stevenson and Oliver Richardson with Pulling attacking wherever possible too. Richardson was ahead at the chequered flag of an epic race with Strong slipping through to 2nd ahead of Stevenson.

Final 2 was a continuous battle between Richardson and Pulling with Richardson leading most of the way apart from a few brief periods with Pulling ahead. They pulled away from Strong who took 3rd from Stevenson on lap 14. Richardson was again triumphant, almost two tenths ahead of Pulling.

Kristian Brierley qualified fastest on Saturday morning with both Lee Whittingham and Ryan Cole 0.07s behind him, while in the heats Brierley, Whittingham and Adam Sparrow won a heat each with Whittingham taking pole for Final 1.

There was more close racing in the Senior class with Brierley, Whittingham and Sparrow taking turns in control. However, Chris Whitton took the lead three laps from the end to win by a small margin from Whittingham.

In Final 2 Whittingham and Robert Welham overtook Whitton but Whitton bided his time to retake the lead for the last five laps to win. Welham had dropped to 3rd but overtook Sparrow in the closing stages although he wasn’t quite close enough to take the win on the last lap.

Archie Walker was the poleman after the two sessions of Qualifying with Mikhai Singh 2nd and Sonny Smith 3rd, but 10th qualifier Daniel Guinchard came through to win both of his heats and take pole for Final 1.

Oliver Greenall made the best start in Final 1 but poleman Guinchard soon repassed and held the lead until near the end, he and Alfie Rigby pulling away from the pack which was headed by Sebastian Bloch and Theo Micouris. The pair closed back up to the leaders at the end and Rigby took the lead in the last lap battle to go on to win from Micouris, but he was penalised a lap so Bloch and Guinchard took the remaining podium positions.

In Final 2 Rigby led most of the race but didn’t have it all his own way, leading a pack of several karts, including Guinchard, Greenall, Bloch and Kean Berta. Guinchard and Greenall both had a turn in the lead but Rigby retook control on the last lap to win ahead of Guinchard and Berta.

Myles Barthorpe narrowly took pole ahead of Brodie Trayhorn and Sean Cuss but a penalty for Barthorpe dropped him down to 4th on the Final 1 grid despite a win, while Trayhorn took pole with a 1st and 2nd in the heats.

Trayhorn held the lead early on in Final 1, but Barthorpe gained back four places in quick succession to take the lead on lap 4. Barthorpe never managed to shake Trayhorn off but they pulled away from 3rd-placed Charlie Knight until the end of the race.

Barthorpe led from lights to flag in Final 2 while Cuss moved up to 2nd early in the race before Trayhorn retook the position in mid-race. Knight again took 3rd after fighting off Archie Kitching.

Guy Cunnington dominated the early stages of the Clay Pigeon round with pole in Qualifying and two heat wins, with James Lowther the closest to him.

Lowther made a good start from 2nd but Cunnington quickly retook the lead and pulled away from Lowther slowly throughout the race with Oakley Pryer taking 3rd at half-distance.

Cunnington could only hold the lead for a few laps in Final 2 though, with Lowther taking control a couple of laps in and going on to win. Pryer took 2nd for much of the race but Cunnington retook the runner-up spot with three laps to go.

Barrett was never headed in Final 1, with Turner initially 2nd before he was overtaken by Turney. Turney closed up on Barrett but not quite enough, although he had escaped from the threat of Turner.

Tommy Foster had been fastest in Final 1, and after early leader Turney’s Final 2 came to an abrupt end after an incident with Barrett, he was 2nd behind Turner. Foster reeled Turner in and pulled away once he had taken the lead to win by a second from Turner with Tom Edmunds a further four tenths back.

Chris Thomas took pole in Rotax 177 with Daniel Martin close behind, with both heat wins going to Thomas. Championship leader Louis Large came through to take 2nd in both heats for 2nd on the Final 1 grid with Colin Davis 3rd.

Thomas dominated Final 1, finishing 1.2s ahead of the experienced Davis with Large 3rd, and it was the same in Final 2 despite the efforts of Martin early on.