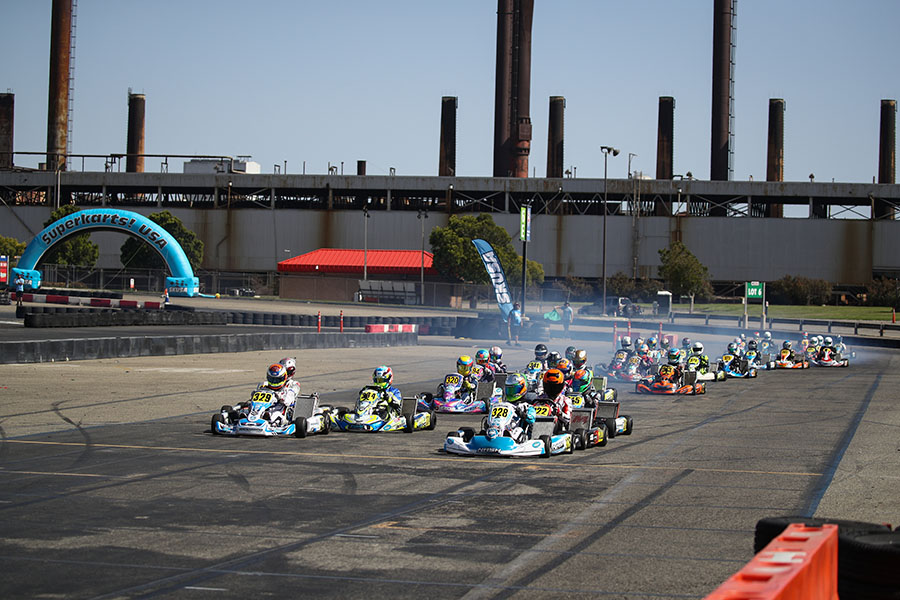 The 2018 season for the California ProKart Challenge resumed on June 1-2 as the program visited the CalSpeed Karting Center in Fontana, California. After taking the months of April and May off for the SKUSA Pro Tour SpringNationals, racers from all over the western half of the United States converged on the ‘Grande’ circuit that sits just outside the Auto Club Speedway facility, where many of the southern California karters call home. The total number of racers reached the 150 mark, as the series met the halfway point of the championship chase by putting Round Three into the books. 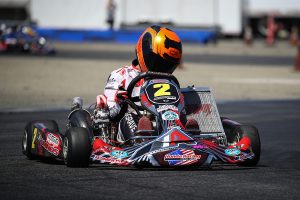 The first half of the 2018 California ProKart Challenge has been perfect for Billy Musgrave. The 2017 SKUSA SuperNationals winner has won every on-track session over the first three rounds, including the fast lap honors in the Mad Old Nut S1 Pro Stock Honda class. Musgrave swept the action at his home track for his third straight perfect score on the season, highlighted by leading all 18 laps of the Final. The fight for second was between SKUSA Pro Tour winner Kyle Wick and Christian Brooks, making his first S1 start of 2018. Brooks was able to hold off Wick at the line; however, both were removed from the results for unsportsmanlike conduct. This promoted Matias Podboj to second with Jason Pettit rounding out the podium.

It has been a competitive season in the Phil Giebler Racing X30 Senior division with the CalSpeed event featuring 35 drivers. Just five thousandths separated the top two drivers in qualifying, with Round Two victor Jake Drew edging out recent SKUSA Pro Tour SpringNationals winner Dante Yu for fast time. The two remained at the front in the opening heat race, crossing the checkered flag in the same order as qualifying. Yu was able to manage the win in Heat #2, with Drew dropping back to third behind Senior rookie Trey Brown. After an early battle in the Main, Yu emerged with the lead and was able to pull away from the rest of the field to earn his first series victory of 2018 by over five seconds. The fight for second went down to the wire, with six drivers crossing the line within six tenths of a second, including a three wide skirmish on the exit of the final corner. Canadian Cedrik Lupien came away with the runner-up position in his first series start of 2018. Hannah Greenemeier bagged her first podium finish in third as Brown went from second to fourth in the final corner. Joseph Daniele, Drew and Samuel Lupien completed the top-seven. 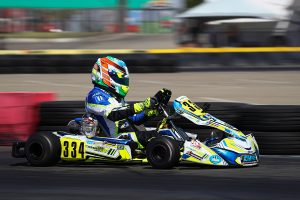 Dante Yu is the third different winner on the season in X30 Senior (Photo: DromoPhotos.com)

Kai Sorensen earned a second straight victory in the Ryan Perry Motorsport Mini Swift division. He and defending SKUSA Pro Tour champion Carson Morgan battled each other all day for the top spot. Morgan, making his first start since a hard flip at the SKUSA SpringNationals last month, struck first with fast time in qualifying and then edging out Sorensen by 25 thousandths of a second in Heat #1. The results were flipped in Heat #2 with Sorensen crossing the line first ahead of Morgan by just 54 thousandths. On the opening lap of the Final, Morgan was involved in contact and spun around, dropping him to the tail of the field. This gave Sorensen a clean wire-to-wire run for the victory, his second of the year. Enzo Deligny and Cooper Hicks, who advanced 15 positions during the race, joined Sorensen on the podium – with Dane Idelson fourth and championship leader Logan Toke in fifth with fast lap of the race.

Dustin Salaverria became the third different winner in the Nash Motorsportz X30 Junior category in 2018. Round One victor Alan Tang was the driver to beat all day. Tang was quickest in qualifying before leading wire-to-wire in both heat races to retain the pole position for the main event. A tough opening circuit dropped Tang down to the fifth position, with Salaverria grabbing the point from the outside of row one. That was all Salaverria needed, leading the entire 18-lap distance for his first California PKC victory of 2018. The fight for second went to point leader Cole Morgan, holding back Tang for the runner-up spot. Bryce Stevens ran fourth with Josh Pierson, posting fast lap of the race, in fifth. 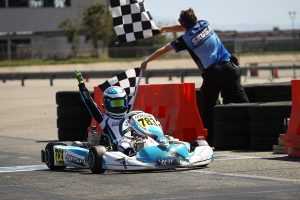 The Rolison Performance Group X30 Master class saw a sweep on the day by Nick de Graaf. It was a near perfect day for de Graaf, as he went on to set fast time in qualifying and lead all laps in both heat races. He came under pressure from Meyer in the opening lap of the Final, allowing Carlos Calderon to slip past both to lead the first few circuits. Nick shook off Meyer and ran down Calderon, making quick work to retake the top spot. From there, de Graaf ran fast laps of the race to establish a two-second advantage by the checkered flag. Calderon held on for second, matching his best finish of the season, with Branden Bell earning a podium finish of third in his first series start of 2018. Meyer ended up fourth, with Chris Kneevers in fifth.

Stuart Hayner became the third different winner in the new Empire Karts X30 Super Master division. Hayner had a sweep going on the day until Heat #2. Hayner set fast time in qualifying and won the opening heat. While leading in class for the second heat, Hayner was involved in contact. He was shuffled back toward the end of the field, finishing sixth as Round Two victor Steve Ryckebosch took the win. Fast laps of the race allowed Hayner to climb through the field to the point and drive away to a four-second advantage for the class victory. Robert Switzler and Renan Bayar completed the podium, with Ryckebosch retiring on lap 11. 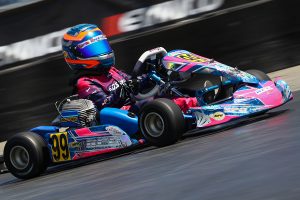 Graham Trammell kept his race streak alive with a third straight win in the PKS Kart Supplies Micro Swift class. LAKC leader John Antonino set the pace to begin the round with fast time in qualifying and winning Heat #1. Logan Chambers came out of Heat #2 as the victor, earning the pole position for the main event. Trammell started fourth and quickly found his way to the lead in the Final. Taking the point on lap five, Trammell ran fast laps of the race to establish a two-second advantage at the checkered flag. Antonino won the fight for second over Keagan Kaminski, with Chambers and Rocky Moran rounding out the top-five.

All but two of the Stock Honda categories were swept on the day. LAKC point leader Rob Logan put in another solid performance at his home track in the Doran Motorsports Group S4 Master Stock Honda class. Only five hundredths of a second separated the fast laps of Vivek Tandon and Logan in qualifying. Tandon earned the fast time and the pole position for the opening heat race. That was all Tandon could keep from Logan, as the defending series champion led the rest of the day with both heat wins and the green-to-checkered performance in the Final for his first victory of the 2018 season. Tandon went on to finish second, with championship leader Mike Mantel in third. Cash Baxley grabbed his second straight victory in the Mike Manning Karting S5 Junior Stock Honda division. Defending series champion Jacopo Pizzinato earned fast time in qualifying before Baxley swept the remainder of the day. Pizzinato settled for second, with Connor Robles completing the podium. 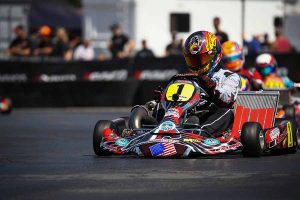 Royal McKee made things look easy in the Swiss-Micron S2 Semi-Pro Stock Honda division. A winner at the LAKC event prior to the California PKC weekend, McKee used the home track advantage to sweep the action for his first series victory of 2018, making him the third different winner on the year. Prescott Campbell was second, with Garrett McKelvie rounding out the podium. Round Two winner Carlee Taylor was fourth with Worawong Komarakul in fifth. A second straight win for Eddie Tafoya was earned in the Ace High Designs S3 Novice Stock Honda class. Tafoya put together his first sweep of the 2018 season, earning a perfect score at Round Three with his victory over Round One victor Emon Fazlollahi and Dustin Kudela. Tyler DeGraff and Quintin Bineau completed the top-five. John Crow put in his second perfect round for the first half of the season in the Musgrave Racing Company S4 Super Master Stock Honda category. Crow swept the day, capped off with a sizable lead in the Final of 13 seconds over Myan Spaccarelli and Warren Kindberg. Brett Harrelson finished fourth, with Carl Lewis in fifth.

The 2018 California ProKart Challenge returns to action in just four weeks, heading north to the Santa Maria Kart Track on July 6-7. Registration is already open at the SKUSA MotorsportsReg.com page, and pit spot reservations are also available now thru the SKUSA online store. For more information on anything related to Superkarts! USA, please visit the website – www.superkartsusa.com – and be sure to follow the Superkarts! USA Facebook page, Twitter and Instagram accounts.