CRG Dominant in KZ2 and KZ2 Cup of DKM at Ampfing 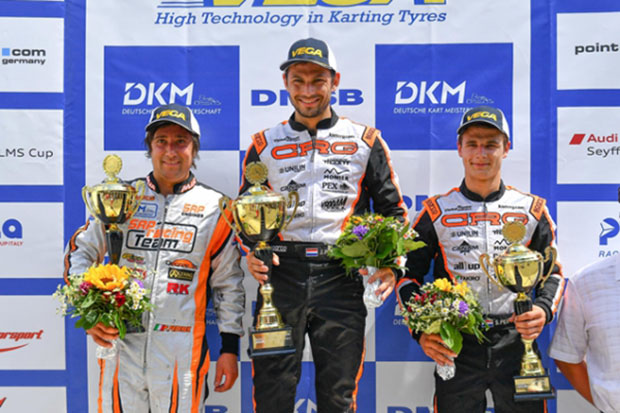 Jorrit Pex and Fabian Federer kept their dominant momentum in DKM at Ampfing in KZ2. They claimed the victory in the third round of the German series. Emilien Drenner confirmed his lead in KZ2 Cup taking a double win on Kalì-Kart.

The circuit of Ampfing (Germany) has staged the third round of the German Championship DKM and the verdict has been quite net as CRG has shown an overwhelming supremacy in KZ2 with the two wins going to Fabian Federer and Jorrit Pex. Emilien Denner also claimed an excellent result in KZ2 Cup on Kalì-Kart.

KZ2. The victory in the first of the two finals in Ampfing in KZ2 went to Fabian Federer on CRG-Tm. Team SRP Racing’s color bearer also secured the pole position and won two heats. Federer won the first final leading CRG Holland’s Jorrit Pex, while his brother and team mate Stan Pex was fourth. CRG Holland’s Benjamin Tornqvist-Persson was also among the quickest ending sixth. CRG domination was confirmed in Race2 as the Italian outfit locked off the top 3. This time around Jorrit Pex won the race from Federer to his brother Stan. Tornqvist ended in the top ten in ninth place. Thanks to this result, six time DKM winner Jorrit Pex confirmed to be the leader of the championship at 148 points, but Federer closed in and is currently only one point shy of the lead. Stan Pex rounds off the CRG top 3 in KZ2, as he stands third at 110 points.

KZ2 CUP. CRG’s supremacy extended also to KZ2 Cup as Emilien Denner led to a fair and square win his Kalì-Kart chassis. Following the third place in qualifying and the pole position after heats, Denner unleashed all his speed in the two finals winning them both. CRG’s result in Race1 was completed by the second place secured by Patrick Kreutz on CRG-Tm run by team RS-Motorsport, and the third by Luka Kamali on CRG-Tm run by TB Racing Team. Thomas Neumann also run a good race ending fifth on CRG-Modena. Marvin Langenbacher of RS-Motorsport closed within the top ten for CRG in P7, leading CRG Holland’s Mark Potman. Denner repeated the victory in Race2 leading Kamali and Kreutz in another all-CRG podium. Langenbacher was sixth, Potman ninth. Denner incremented his lead on top of the classification reaching 178 points. He is currently followed by Mahler (DR-Kartshop Ampfing) at 119 points. Kamali is fourth at 79, Neumann fifth at 71.

CRG drivers used this race in Ampfing eying the CIK-FIA European Championship to be held next June 17th in OK and OK-Junior. Andrea Rosso had a strong Race2 in OK and closed his effort in P5 after a good comeback from the first final where he had been involved in an incident. Niels Troger of RTG Kartsport was fourth, Kas Haverkort seventh on Zanardi. Troger was seventh in final one, Haverkort 12th. Thompson is currently leading the classification at 154 points, Haverkort is third at 103 and Rosso eighth at 58.

The youngsters of CRG in OK-Junior struggled a bit more. Alfio Andrea Spina ended 19th, Tyler Maxson 22nd, Enzo Trulli 24th, while Enzo Scionti was forced to the retirement instead. Spina repeated the 19th place in race two, Trulli was 21st, Scionti 23rd, Maxson 24th. Xizhang Huang could not take part in the finals due the injuries sustained in the warm-up held on Sunday morning.