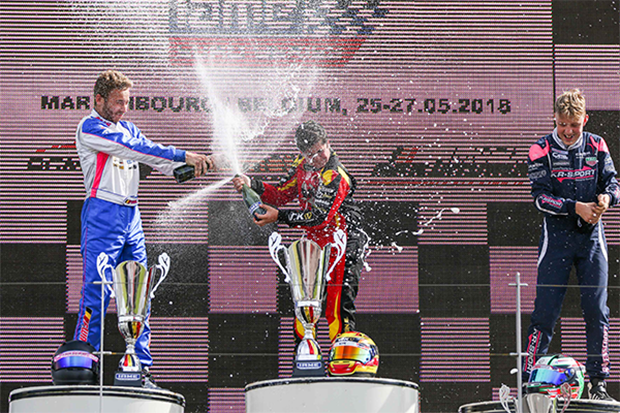 The second race of the RGMMC 2018 IAME Euro Series took place on the legendary track of Mariembourg in Belgium, with 140 drivers taking part in the four categories. Despite some threats of rain, the entire race took place in high temperatures and dry track conditions, mostly under a sunny sky!

With a new winner in X30 Senior, Elie Goldstein, and another in X30 Junior, Enzo Joulié, and several surprises, there was a shakeup at the top of standings. Meanwhile Alejandro Melendez in X30 Mini and Sten Piirimagi in X30 Shifters reaffirmed their positions with additional wins. All categories were characterized by continuous battles and position changes that provided a great spectacle.

Once again, the event had excellent video stream coverage throughout the entire duration of the weekend and additional behind the scenes video footage like the onboard track presentation, the pint in the paddock, and the grid interviews, showing the continuous commitment of RGMMC to the good promotion of its races.

Despite being the smallest of the categories, X30 Mini was one of the most spectacular categories during the entire weekend, with constant battles and overtakes, and average speeds of 78km/h.

At the end of Friday’s Qualifying Practice, it was the local Kimmy Abraham who set the fastest lap, ahead of Sergio Ruiz and Nathan Ottink. Hard racing took place in the Qualifying Heats of Saturday, with several position changes. The wins where split between Miguel Peiró, Kimmy Abraham and Nathan Ottink, with Peiro getting the pole position for Sunday’s pre-final race.

The pre-final started with a twist, an accident right after the start between Abraham and Ottink that took with them Volt and Kowalewski. While most were able to continue, Abraham had to stop and Ottink crossed the line in last position, 42” behind. This allowed for the points leader Melendez to make an amazing comeback of 8 places and win the pre-final setting himself perfectly for the start of the final race.

Having the series leader in first while most other protagonists of the first race at the back of the grid would predictably give a big advantage to Melendez but also pave the ground for the comebacks from the other drivers. So it did, with Melendez leading for the first few laps, but who could expect that Ottink and Abraham would actually make it to the front within just a couple of laps and taking places at the lead with Melendez! Only on the last lap Melendez regained the lead and took the win but with less than half a second separating him from Ottink, Abraham and Fluxa in fourth.

X30 Super Shifter demonstrated once again the power and speed of the IAME shifter engine, easily setting the fastest laps and the highest speeds of the weekend, with an average speed that exceeded 91km/h.

Sten Piirimagi continued his trend setting once again the fastest lap, but this time the result sheets showed him on identical lap times with Kevin Ludi in second and about 1 tenth of a second ahead of Kaspar Korjus; the difference between the first two was less than 0.001 of a second therefore not even showing on the timesheets!

The track layout proved to be very difficult for the Super Shifters to overtake, which made it very important to have a good start, leading to several drivers receiving penalties for jumping the start in the qualifying heats. Piirimagi had a hat-trick of wins, easily setting himself for pole position, ahead of Ludi who, despite one penalty for jumping the start, still found himself second at the end of the day. Third was the Belgian Thierry Delré.

In the pre-final, Piirimagi took the win once again, but Delré got the best over Ludi. Behind them Carlos Leon making up several places, and Kaspar Korjus dropping from his 3rd in qualifying back to 5th for the final.

Come final time, Piirimagi had not lost the lead for the entire weekend but suddenly found himself behind Delré after the start, a place which he quickly gained back. However the longer race didn’t seem to be as easy as he would have expected, as after a few laps Leon found a lot of speed and came to the front challenging for the lead! It didn’t come to fruition but also post-race investigation would have him penalized 5” for a jump start, which would drop him back to third anyway. Crossing the line Piirimagi sealed one more victory for this weekend scoring now the maximum of points in the first two races!

The Juniors started the weekend in the most interesting of track conditions during the Friday Qualifying Practice, as drops of rain started falling just moments after the drivers got on track. It seems that the sudden change of humidity and temperature would have an unexpected effect, as Maximus Mayer set the pole position, Rimmo Kadapic second and Lewis Gilbert third, with lap times that even most Seniors found hard to match throughout the weekend.

Gilbert topped Saturday’s Qualifying Heats following two wins, in front of Josh Rowledge who got one win. Sam Balota was on third place after scoring also one win, but interestingly coming back from 16th in Qualifying Practice. Other notable comebacks included Tom Uzan in 4th from 28th, Joshua McLean 5th from 18th, McNeilly 9th from 29th, and Hakala 11th from 31st!

Just in time for the pre-final, there was a prediction for imminent rain approaching, as well as several raindrops, causing a big panic among the mechanics. Eventually the rain never came so the rain tires stayed back in the trolleys. On track Gilbert took the win, but second went to Boya who came all the way from 14th just in front of Balota.

The final proved to be an eventful one, with loads of battles and leader changes. Gilbert was quickly overtaken by Boya on the first lap but took back the place one lap later. Rowledge was the next to take the lead for several laps, but he had to give it up to the eventual race winner, Enzo Joulié who came back from 5th. Rowledge eventually finished second and Balota third.

Despite the race clashing with school exams week, a schedule change allowed for the drivers to show up at the last minute and compete, and the 72 entries showed the strength of the category in this series! In order however to do this, Qualifying Practice was moved to Saturday morning, making it for a very long day for the drivers who also had to compete in 4 Qualifying Heats each.

Fastest of all was Nicolas Picot, ahead of the local Elie Goldstein with Joe Turney third. Picot however, despite his two wins, dropped back to 6th after the heats, showing how competitive the racing was. The top spot was inherited by Goldstein, also with two wins, at the end of Saturday. Second was Sean Butcher with two wins as well, and third was Joe Turney with one win.

The start of the pre-final saw an accident between several of the front runners, with more than 8 karts either retiring or finishing the race with a front-bumper penalty. During this time, Goldstein briefly lost the lead, with the very experienced Henkie Waldschmidt capitalizing and getting in front for a few laps. Goldstein however made it back, with Clayton Ravenscroft and following him in second and Jordan Brown-Nutley in third.

At the start of the final Goldstein lost the start to Ravenscroft who lead briefly before giving in to the pressure of Turney. However, it was Waldscmidt crossing the line in first while Goldstein took the place behind him. The big surprise of the race was the man to cross the line in third, Felix Wargé, who made up no less than 30 places! Following a 5” front-bumper penalty to Waldschmidt that would drop him to fifth, the win was inherited by Goldstein, Wargé took second and Ravenscroft was promoted to third.

Euro Series at Half Time

At the end of the race we’re at the half-point of the season, with Ravenscroft now leading the X30 Senior standings, Gilbert leading the X30 Juniors, Piirimagi still on top of the X30 Super Shifters and Melendez ahead in the X30 Mini.

Next race will take place in Wackersdorf, Germany, on July 5-8.

As always, there was high quality live video stream and commentary coverage during all official sessions, which was available to stream worldwide, provided by RGMMC’s professional video crew.

All races were made available on YouTube as well as interviews and highlights on RGMMC’s channel https://www.youtube.com/telemundimedia
Photos of all the leaders of every day, as well as race highlights by The RaceBox can be found on the websites of IAME Euro series www.iameeuroseries.com, Telemundi Media www.telemundi.com, and the IAME Euro Series Facebook fan page https://www.facebook.com/x30euro/