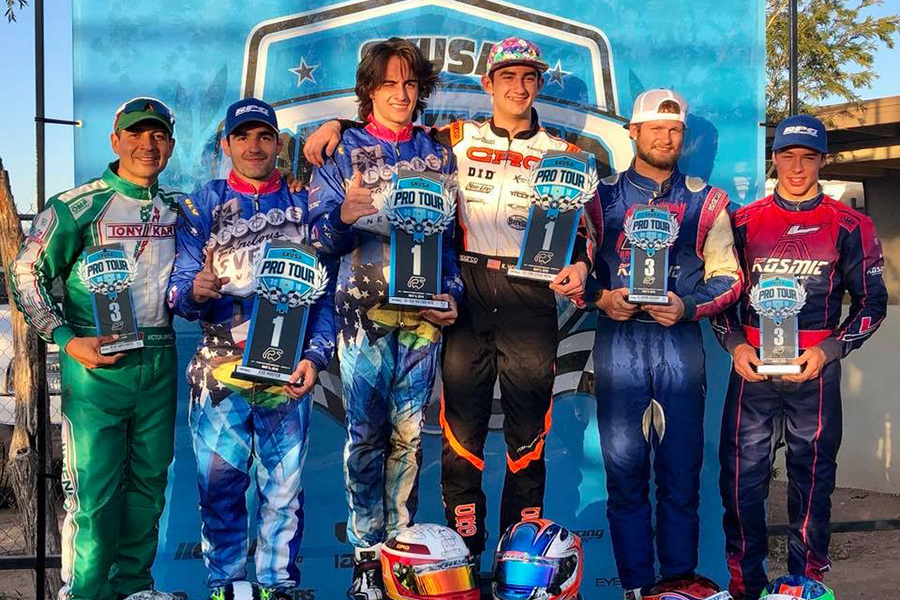 Success is not something you earn overnight. It is achieved by putting in the time and effort to reach that goal or moment you set out to reach. Rolison Performance Group has became one of the most successful karting teams in North America for the last decade, taking drivers from their early beginnings and guiding them along the way to reaching their goals while earning great success, both on and off the track. Part of that mindset comes from gaining experience in tough and competitive conditions, in which the RPG team will see at the upcoming California ProKart Challenge event at the CalSpeed Karting Center in Fontana, California. The Superkarts! USA flagship regional program hosts its third round of the 2018 season on June 1-2. Rolison Performance Group is using the California PKC as a great training ground for its racers, bridging the gap up from the local levels into regional competition or providing more experience for those waiting for the next national event.

“In order to be the best, you have to put yourself in hard and challenging situations in order to learn and get better,” stated Mike Rolison of Rolison Performance Group. “Racing is not easy, and we make sure our racers understand that concept when under our tent. The competition at the California ProKart Challenge is among the best in the country, and it provides great training ground for the veterans we have on the team, and the young or newer drivers trying to find their way into the sport. Our list of drivers for CalSpeed is solid and we should be able to leave Fontana with a number of strong results in both IAME and Stock Honda categories.”

The team is also cashing in on solid results in the first two events of the 2018 season. Micro Swift driver Graham Trammell and X30 Senior driver Samuel Lupien are leading the championship standings. Trammell has nearly two perfect rounds of racing in the books, having won both main events and nearly earning maximum championship points each weekend with only one on-track session that Graham did not finish in the P1 position aboard his RPG-prepared machine. Lupien is making the long trek from Montreal, Quebec, Canada to compete with the RPG team at the California PKC. Lupien has one podium result in his two top-10 results, including a heat race win at the Streets of Willow event to put him at the top of the title chase at the one-third mark. Fellow RPG/Kosmic driver Jacob Gulick sits sixth in the point standings, having earned fast time in the Round Two qualifying. Lupien’s brother Cedrick is set to make his 2018 debut, racing alongside Senior rookie Hannah Greenemeier and Adam Smalley.

Billy Cleavelin began the season with a victory in his S4 Super Master Stock Honda debut this past February and is returning with RPG for his second race of 2018. Kyle Wick is a current SKUSA Pro Tour contender for the championship in the S1 Pro Stock Honda category, set to make his 2018 debut at the California ProKart Challenge aboard his RPG machine. Connor Wick and Matthew Morgan round out the shifterkart contingent for RPG at CalSpeed. Wick is making his first ever start at the California PKC in the S2 Semi-Pro Stock Honda category as is Morgan in the S3 Novice Stock Honda division. Josh Pierson (X30 Junior) and Tim Meyer (X30 Master) complete the Rolison Performance Group roster set to compete in Fontana.

Following the CalSpeed weekend for the California ProKart Challenge event, Rolison Performance Group is set to head back north to its home base at Pat’s Acres Racing Complex in Canby, Oregon for two weeks of driver training before taking the team to the opening weekend of the Can-Am Karting Challenge, scheduled for June 22-24 at the Portland Karting Association facility in McMinnville, Oregon. Head over to RolisonPerformanceGroup.com for more information on becoming part of the RPG operation, and follow their success on Facebook, Twitter and Instagram.

About Rolison Performance Group:
The Rolison Performance Group is a leading race team and prep shop in American karting, and is also a Rotax Service Center and a Kosmic chassis dealer. Owner Mike Rolison, known as “Roli” at the racetrack, has built a career coaching some of the best kart racers on the West Coast. Over the past decade, he has helped 100′s of drivers and mechanics improve their craft. Mike brings world class driving and coaching experience to every racer he works with. Drivers that have been part of the Rolison Performance Group team over the past few seasons have recorded a number of national victories, claiming Superkarts! USA Pro Tour and Rotax Challenge of the Americas titles. RPG provides trackside support and arrive-and-drive programs for many series, including the SKUSA Winter Series, SKUSA Pro Tour, US Open, Can-Am Karting Challenge, California ProKart Challenge and the SKUSA SuperNationals. The team is a Kosmic chassis and product line dealer and is proud to campaign karts on the regional and national stage.