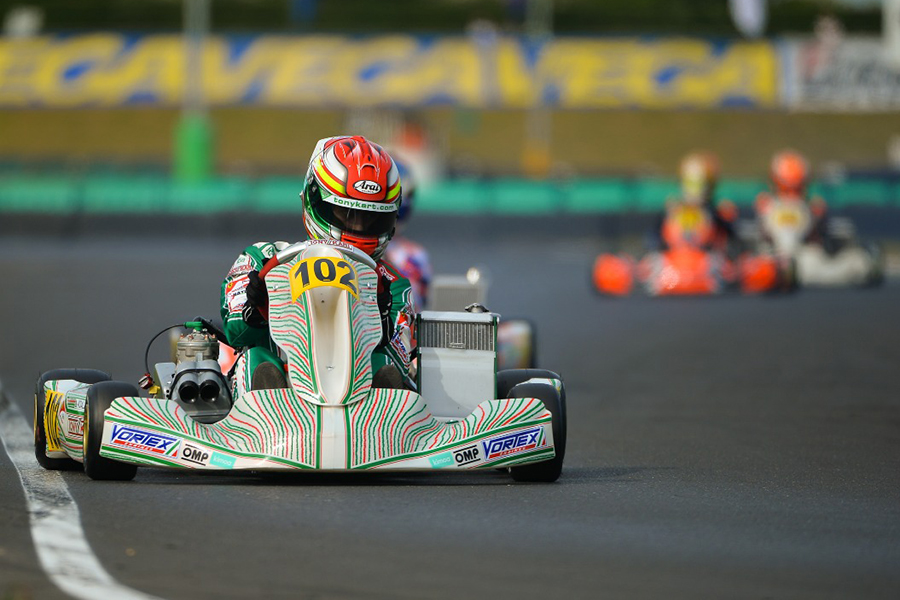 David Vidales hit the second place on the final of OK on the occasion of the second round of the European Championship of OK and OKJ on the English PF International Circuit.

OK – DDS ENGINE
The British weekend at the PF International circuit, hosting the second round of the FIA Karting European Championship for the OK and OKJ single-speed categories, saw the Vortex engines stand out even before getting on track. The DDS, in fact, were chosen by 26 drivers out of 69 checked (38%): among them Juho Valtanen (Kohtala Sports) and David Vidales (Tony Kart Racing Team) succeed to win and to gain two podiums each in the eliminatory heats. Harry Thompson and Zane Maloney (Ricky Flynn Motorsport) together with Noah Milell (Tony Kart Racing Team) have gained places of honor during the heats, while in the final he was again David Vidales who highlighted the potential of our Vortex DDS engines, with a silver medal and, among other things, the fastest lap of the race (54”903). In the Top 10 list, also Nicklas Nielsen (KSM Schumacher) in sixth and Juho Valtanen in eighth place.

OKJ – DDJ ENGINE
Excellent results for the Vortex engines also in the Junior category, in which 35% of the drivers chose our DDJ. The fastest ever was the one brought on track by Kirill Smal (Ward Racing), author of the pole position with 56”314. Furthermore, the Russian driver has gained three victories during the eliminatory heats and during the final. In the heats, the British Kai Askey (Ricky Flynn Motorsport) gained the top positions with two successes. Plenty were also the podiums in the heats achieved by our Vortex DDJ, specifically by Luca Griggs (Lennox Racing Team), Thomas Ten Brinke and Zak O Sullivan (Ricky Flynn Motorsport), by Tony Kart Racing Team drivers Sebastian Montoya and Josep Maria Martì and finally by Rafael Camara (Kosmic Racing Department). In the decisive race, however, there were three drivers who hit the Top 10: Thomas Ten Brinke (fifth), Rafael Camara (sixth) and Georgi Dimitrov (Team Oakes, eighth) author of an unbelievable comeback in the final, next to Paul Aron (Ricky Flynn Motorsport) for the fastest lap of the race (56”480).