Silver Medal for Per David Vidales at PFI European Championship 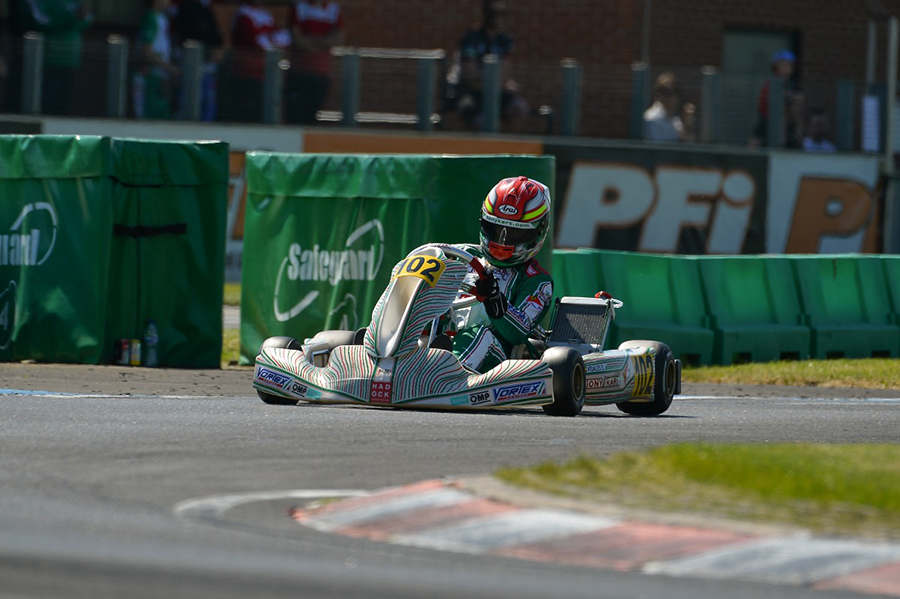 On the PF International circuit, the Tony Kart Racing Team gained the podium in the OK final thanks to David Vidales.

The second round of the FIA Karting European Championship reserved for the single-speed OK and OKJ categories, the Kart Grand Prix – Great Britain, ended at the best for the Tony Kart Racing Team, back on the podium at the English PF International circuit. David Vidales, was able to gain in the OK final a second place and the fastest lap of the race.

Vidales starts with the thirteenth time in the qualifying heats, and among other results, also wins two placements on the podium in the heat and a victorythat finally puts him in seventh place for the final. David immediately enters the fight for the victory, also scoring the fastest lap of the race (54”903). At the end, he finishes under the chequered flag, but the disqualification of a rival allows Vidales to climb on a further position in the final ranking.

His second place at the end of the weekend, then, is the right reward for the effort shown on the English track, which on the other hand, did not bring luck to his teammate Noah Milell. The Swede driver has some problems at the beginning of the weekend and tries to recover ground in the eliminatory heats, gaining, as best result, a third place that places him in 17th place for the OK final. A collision immediately after the start, however, compromises his chances of doing well, consequently he loses positions in the general Championship Ranking.

Little luck also for our drivers in the OKJ category, where initially Sebastian Montoya became the standard bearer of our racing department winning a considerable second place and several placings in the eliminatory heats. A ten-second penalty for the detachment of the front fairing of his Tony Kart 401S Racer chassis, powered by Vortex, however, does not allow him to go beyond the twenty-first position in the final. Bad luck also for Josep Maria Martì, who after the third place in the eliminatory heats does is not able to do better than the 27th place in the final race. Finally, an uphill weekend, for Laurens Van Hoepen, who does not know how to adapt to a technical and difficult track like the English one and, finally, does not allow him to succeed the eliminatory heats, remaining excluded from the final.

The next engagement of the Tony Kart Racing Team will be June 14-17, when the third round of the CIK-FIA European Championship will begin for the OK and OKJ single-speed categories at the Ampfing circuit in Germany.