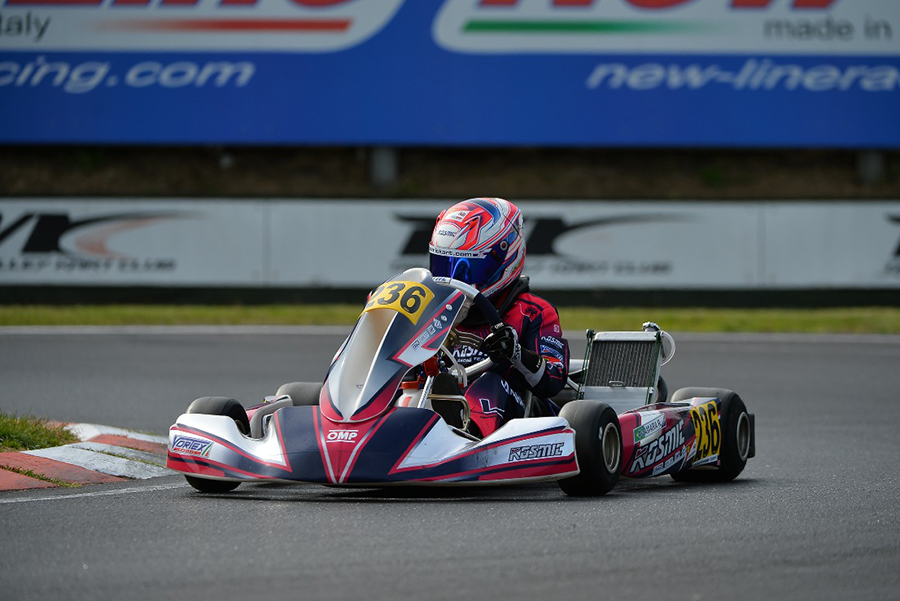 The British round of the European Championship for OK-OKJ categories held on the PF International circuit, brought good luck to Rafael Camara, author of the sixth position in the final of the Junior category.

The Kart Grand Prix – Great Britain, the second round of the FIA Karting European Championship for OK/OKJ categories held on the PF International circuit, allowed the Kosmic Racing Department to make a difference and climb important positions in the general ranking. In particular, in the Junior category, where Rafael Camara was able to get the best of the potential of his Kosmic Mercury S chassis powered by Vortex, taking him to the sixth place overall in the decisive race of the weekend.

The Brazilian driver stands out immediately at the beginning of the weekend with a twelfth place in the qualifying heats giving him the chances to gain many important placings in the eliminatory heats. The best is a second place that allows him, then, to qualify in eighth position for the final of the OKJ category, where he jumps well and immediately enters the fight for the lead of the race. At the end, Rafael crosses the finishing line in the sixth place, his best result since the beginning of the season and which now sees him very close to the Top 10 of the general ranking.

Less lucky were his teammates, first in the list David Hadrien who has never found the right rhythm since the beginning of the weekend: the winner of the third round of the WSK in Muro Leccese had some difficulties during the qualifying heats, which resulted in a difficult performance during the eliminatory heats, after which he was not able to gain the minimum score to enter the final. Instead, the US driver Jak Crawford ran the final: in his first experience with the Kosmic Racing Department’s colours, the driver all stars and stripes proved to be brilliant during the qualifying heats, even though he paid the poor experience during the decisive race, finished in 24th position.

Sad conclusion for our drivers in the Senior category: here, Roman Stanek, was called to defend the leadership conquered with the victory of the first round in Sarno, but a collision at the starting grid of the final in OK did not allow him to gather any advantage. On the contrary, he had to retreat both in the finishing line and in the general ranking, where he is now in third place with 16 points to be recovered to achieve again the top positions. Viktor Gustafssonal so competed next to him, able to improve his driving experience in international competitions in order to get ready for the upcoming events of the season.

The next competitive appointment of the Kosmic Racing Department is now the third round of the FIA Karting European Championship for the OK and OKJ single-speed categories, scheduled for the weekend of 14-17 June at the German Ampfing circuit.