Another Podium for Hiltbrand, New Leader of the European Championship 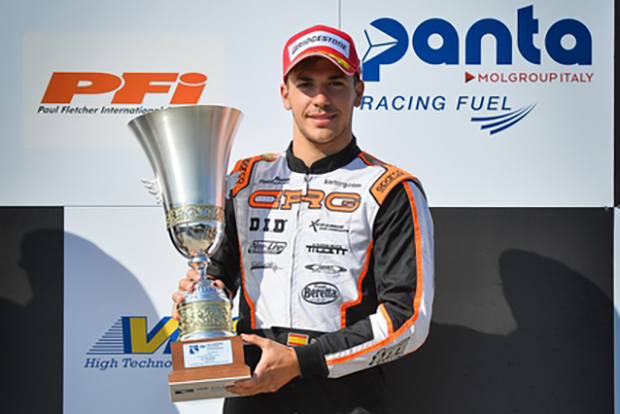 Pedro Hiltbrand and CRG got again on the podium in the second round of the European OK and OK-Junior Championship in England at PFI. This third place is great for the Championship. Bortoleto the best of CRG drivers in OK-Junior.

The second round of the European Championship of OK and OK-Junior has taken place at the spectacular circuit PFI. This difficult track has been quite well tested lately, especially in 2017 when it housed the World Championship. Pedro Hiltbrand has been excellent in OK, especially considering the Championship, and claimed the third place at the end of an exciting finale. This result earned him the classification lead.

HILTBRAND ON THE OK PODIUM. Three CRG drivers managed to qualify for the Final in the OK European Championship at PFI: Pedro Hiltbrand, Callum Bradshaw and Andrea Rosso. This has been a good race, exciting and spectacular, with a super Pedro Hiltbrand taking another podium, after the P2 scored in Sarno. In England, Hiltbrand was third after the disqualification of Travisanutto, who crossed the finish line as first, and the penalty handed to Hodgson, who was third at the flag. Hiltbrand managed to hold P3 during the Final, but then he had to give way to his rivals. This third place, together with the second place obtained in Sarno, boosts Hiltbrand’s confidence  for the remaining of the European Championship that he managed to win back in 2016. Callum Bradshaw managed to end in the top-ten in tenth place, while Andrea Rosso was 14th. Hiltbrand was sixth after heats, Bradshaw 14th and Rosso 21st. The victory of the Final went to Hannes Janker.

Pedro Hiltbrand: “It has been a tough weekend as always, we were struggling a bit after qualifying, but after the heats I was getting closer to the front-runners. I expected more from the Final, it worked quite well for the first six-seven laps but then I was loosing a bit. I want to say thanks to all my team CRG, to TM and my mechanic and congratulations for the fantastic work. We are now going to Ampfing to try and win, of course we need to think about the championship but there are still two rounds to be run.”

In OK, Franco Colapinto had been unlucky having to retire from the closing heat on Sunday and ending only 51st. He therefore could not qualify for the Final. Ayrton Fontecha (46th) could not recover as he would have deserved.

GOOD BORTOLETO IN OK-JUNIOR. It has been a real pity for Gabriel Bortoleto, who represented CRG in the OK-Junior’s final in this second round of the European Championship at PFI. He eventually secured a seventh place that is quite tight on him, considering his performance throughout the weekend. Bortoleto had managed to secure a front row start for the Final after a promising P8 in qualifying, two wins and three second places in the heats. These results were quite promising, but Bortoleto unfortunately lost some ground and had to settle for P8. The Final was won by the Dutch Dilano Van T’ Hoff, following a penalty handed to the French Victor Bernier, who had crossed the finish line on top.

Among CRG drivers, Malaysia’s Adam Putera (36th after the heats) did not manage to qualify for OK-Junior’s final, despite some good placings, as happened to Enzo Trulli (37th), who was penalized by the 60th place in qualifying, Alfio Andrea Spina (43°), the Americans Tyler Maxson (56th) and Elio Giovane Gonzales (66th), Leonardo Bertini Colla (59th) and the Chinese Xizheng Huang (61st).