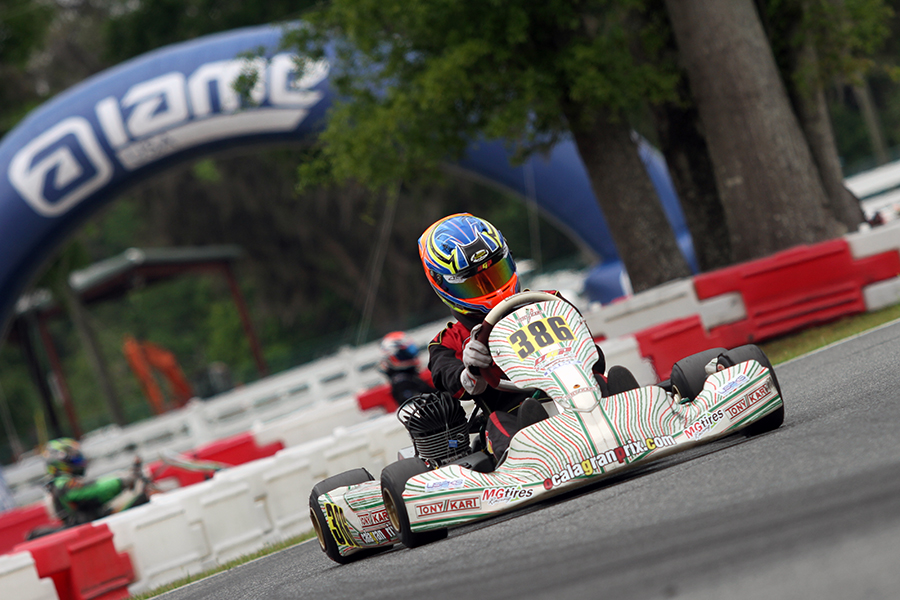 Racing at your home track has a lot of advantages. Drivers with hundreds of laps around a circuit have a level of comfort that is hard to find in just one or two days for some. Knowing every inch of every corner in order to achieve fast and consistent laps put local drivers ahead of the game before the weekend begins. This was apparent during the opening event for the United States Pro Kart Series, held at the Ocala Gran Prix facility about one hour north of Orlando, Florida. OGP driver Zach Hollingshead was able to come away from the weekend with three victories to begin his Senior level career. 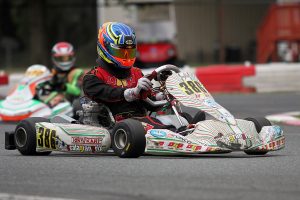 A third victory was added to Zach’s total during the USPKS weekend at Ocala when he was awarded the IAME Senior victory on Sunday (Photo: EKN)

Hollingshead ran double duty on the weekend at Ocala, competing in both the KA100 division along with the IAME Pro category. The KA100 class began its second season at the USPKS program, with the engine gaining popularity throughout the country over the last year. While it wasn’t a perfect weekend, Hollingshead was able to sweep the main events. Zach found himself fifth in qualifying with fellow Florida driver Dylan Gennaro at the top spot. Hollingshead worked his way to the point in the opening heat, scoring the race win. He went wire-to-wire in Heat #2 to earn the pole position spot for the main event. Gennaro got the jump on Zach to begin the Final, leading the first seven laps. Hollingshead took back the point, and led the remainder of the 22-lap race to score his first career USPKS victory.

Qualifying was tight again on Sunday, as Hollingshead finished the session in the third position. Top qualifier Josh Hotz and fellow OGP teammate Morgan Healey mixed it up for the lead in the first half of the Prefinal with Hollingshead securing the position after nine laps. Zach led the remainder of the race to score the win and the pole position for the main event once again. That was all he needed to secure the victory on Sunday. Hollingshead led all 24 laps of the Final to earn a second KA100 win on the weekend.

Running double duty seems to be not a challenge for young drivers, including the 15-year-old Hollingshead. The weekend in the IAME Pro category started out with a tough qualifying session, placing 13th against a very competitive field. Results of sixth and fourth in the heat races helped to put him further up on the grid for the main event. Zach came away with a strong fifth place finish in his IAME Senior debut.

Qualifying went much better on Sunday, with Zach placing second behind Saturday winner Austin Garrison. After getting shuffled to third in the opening lap of the Prefinal, Hollingshead ran second for much of race to earn the outside row one starting position for the main event. Armin Cavkusic got the jump on both front row starters, moving into the lead for the opening lap. Garrison reclaimed the top spot on lap two, with Hollingshead taking over second place a few laps later. Garrison went on to cross the line first with Zach in the second spot. A pushback bumper penalty took the win away from Garrison, promoting Hollingshead to the top step of the podium for his first career IAME Senior victory.

Hollingshead leads the KA100 championship standings at the USPKS by 100 points over Josh Hotz while trails Austin Garrison in the IAME Pro points by 77 markers. Zach will continue chasing both titles with the next event scheduled for June 15-17 at the GoPro Motorplex in Mooresville, North Carolina for the Carolina Grand Prix. He will also be contesting the SKUSA SummerNationals and SuperNationals, in addition to both Rok Cup USA Festivals and the Sunshine State Karting Challenge near home. Depending on his results, Hollingshead hopes to compete at the Rok the Rio event this October in Las Vegas and possible earn a ticket to the Rok Cup International Final in Lonato, Italy. 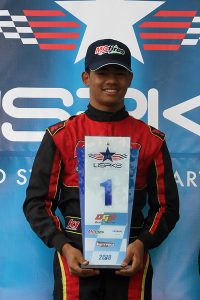 Chassis: Tony Kart
Engine/Engine Builder: X30 Senior, Rok Senior, Rok Senior Shifter, KA 100 / Ocala Gran Prix
Sponsors: Ocala Gran Prix, CA Design, Simpson/Stilo Helmets
Series You Compete In: SKUSA, USPKS, SSKC, Rok Cup, Florida Winter Tour, Ocala Gran Prix
Years Karting: 8
How did you get started in karting? My brother, when he was younger, used to compete in WKA races and became a multi-time national champion at a young age. After he moved on to cars and soon out of racing, my father took me to OGP to do rental karts but I was too young to drive at the age I was. So, my father bought me a Rotax Micro Max and it was one of the greatest decisions he has ever made for me.
What has been the high point in your racing career? In 2016, I became the Rok Cup USA Junior champion, earning a ticket to the Rok Cup International Final in South Garda, Italy.
What are your goals in racing? In the next couple of years, I am hoping to make the jump to some sort of open wheel car.
In a few words, how would you describe your driving style? Aggressive yet smooth and very consistent.
Funniest moment at the race track? Growing up in Florida and being able to do regional races always meant there were fun times at the track, especially with the people I grew up racing with meant that we had a family relationship. So to answer your question, every time at the track was funny, from spending nights at the track and racing golf carts to practice days in the rain with slick tires doing donuts all the way to doing mini 10 lap practice races driving as aggressive and recklessly as possible.

What do you do when not at the track? I am very active and play a lot of sports
What are your goals outside of karting? Play basketball or own a team
What app or game do you play a lot of right now? Fortnight
What type of street car would you like to drive? 2004 Subaru Impreza WRX
What are your pet peeves or things that irritate you? Lots of questions
What do you think could be done to improve the sport of karting? In all honesty I don’t believe the media and exposure is at its finest in karting in the United States at the time. And the rewards or even the recognition karters get in the U.S.
What are your favorite aspects about the sport of karting? The high speed competitiveness in karting is unmatchable. The ability a driver has to think in such a small amount of time is impeccable.