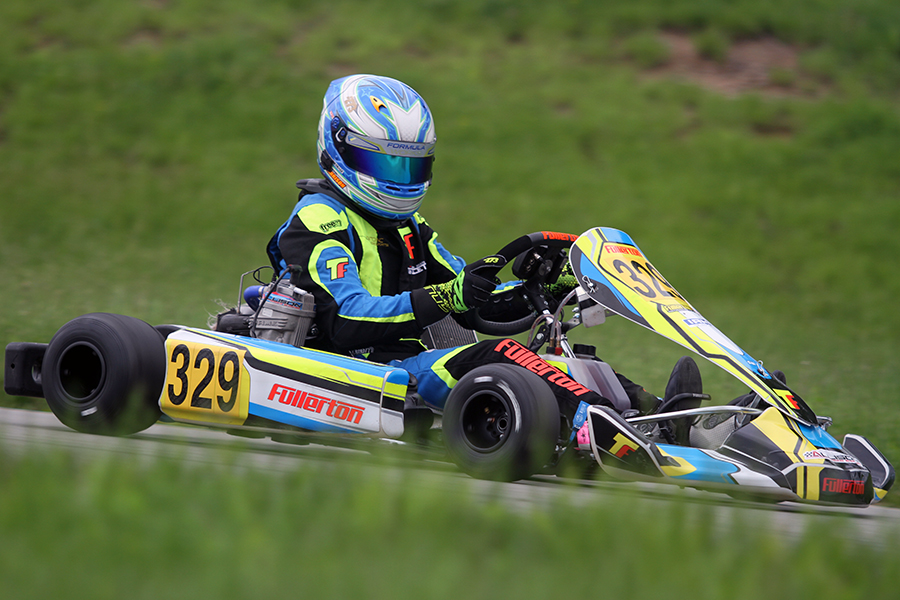 The WKA Bridgestone Manufacturers Cup Series completed the third event of 2018 at the Pittsburgh International Race Complex. Saturday was a battle with the competition and the weather conditions surrounding the Wampum, Pennsylvania facility. Thankfully, Sunday was a breeze in terms of rain with only early morning showers forcing the first few warm-up sessions on wet tires before the track dried up and dry tires were used throughout the day with the sun finally breaking through the clouds by the end of the on-track session. A new day meant new drivers at the front in the number of the categories as the championship chase completed the first half of the season.

Austin Garrison (Fullerton) was among the quickest all weekend long. During Saturday’s main event, the Florida driver was shuffled back to finish eighth. Garrison’s Sunday began even worse, ending up in the tire barriers on the opening lap of warm-up after a rare brake failure. His team jumped on it, and got his kart ready for qualifying. Garrison never flinched, posting fast lap of the session. That was all he needed as Austin swept the Prefinal and Final for the perfect day, never relinquishing the top spot for his second victory of the season. The fight was for second with Saturday winner Teddy Wilson (FA Kart) emerging with the spot over JHDD teammate Colin Neal (Kosmic). Pauly Massimino (KSNA / Kart Republic) recorded another top-five finish in his Senior debut, placing fourth over Andrew Bujdoso (CM / Kart Republic). 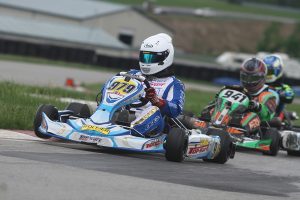 Roughing a year now since the passing of his father, Dakota Pesek (Top Kart) paid tribute to his memory as he did a year ago here at the Pittsburgh facility. Pesek was in the hunt all day Sunday, but it was Emory Lyda (Merlin) that everyone was chasing early as the top qualifier and Prefinal winner. Pesek jumped out to the early lead in the Final until Lyda and Blake Hunt (Fullerton) closed in. The trio went back and forth for the entire distance, with Pesek emerging as the leader and the victor on the final lap. Lyda came across in second with Hunt in third. Chase Carey (Tony Kart) drove to fourth with Roger Myers (DR Kart) in fifth. Cayla Chapman (Top Kart) won her first Yamaha Senior main event, edging out Meghan Peri (FA Kart).

Things were tight in the IAME Junior category throughout the day. Qualifying saw the top three separated by just 85 thousandths of a second with Saturday winner Kaden Wharff (Top Kart) at the top over Matthew Duncovich (Kart Republic) and Josh Green (Kosmic). Wharff led all nine laps of the Prefinal with Green on his bumper with Caleb Bacon (Tony Kart). The three pulled away in the Final, with Wharff out front and beginning the defensive line early. It wasn’t until the final lap when Bacon really put on the pressure. Green sat waiting, and in the back portion of the track, the door opened. He went from third to first, reaching the checkered flag to earn his first WKA victory. Bacon nearly got him at the line, missing by 42 thousandths of a second. Wharff settled for third with Luca Mars (Kosmic) fourth and Connor Ferris (Top Kart) fifth. 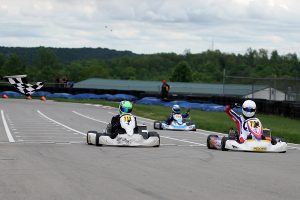 Luca Mars (FA Kart) had the field covered in the Yamaha Junior division, sweeping the day. Mars cleared the field by three tenths of a second in qualifying, before going on to lead wire-to-wire in the Prefinal and Final for his first victory in the category. Tyler Ferris (Top Kart) was able to slip past Kaden Wharff (Top Kart) for the second spot with Quinn (Kosmic) dropping from second to fourth on the final circuit. GoPro winner Donald Whorton II (FA Kart) was fifth.

Veteran Cadet drivers set the tone in the Mini Swift category once racing began. Micro graduate Danny Dyszelski (Parolin), making his first Mini start, stole the fast time in qualifying and stayed with the lead group of Brent Crews (Nitro Kart), Annie Rhule (Energy) and Jeremy Fletcher (Kosmic). Crews came away with the win in the Prefinal with the same four driver deciding the victor in the Final. Crews led for the majority of the race, and won the race to the checkered flag, winning by just 31 thousandths of a second. Fletcher made it a three-wide photo finish, coming up short by 77 thousandths for the victory. Dyszelski finished a solid weekend in fourth with Thomas Annunziata (Nitro Kart) winning the fight for fifth. Dyszelski won the main event in the Yamaha Sportsman division. He and Rhule were the top two on the day. Their Prefinal ended in a tie via the scoring loop, with Dyszelski getting the visual win. The Final was a similar finish, this time with Dyszelski crossing the line nine thousandths of a second ahead of Rhule. Miles Murray (Nitro Kart) ran third with Sebastian Ng (Nitro Kart) unable to complete one lap. 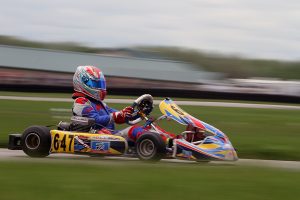 The weekend was a breakout performance for Micro Swift driver Gavan Boschele (Nitro Kart). Saturday’s victory was his first career WKA triumph, and backed it up with a second on Sunday. Championship leader Ben Maier (Nitro Kart) set the tone early, posting fast time and winning the Prefinal. Boschele never gave up fighting throughout the Final along with Mohr in the battle with Maier. Each took a turn at the point, with Boschele emerging as the victor, reaching the checkered flag first by 48 thousandths of a second over Maier. For Maier, it was the first weekend of 2018 to leave without a single main event victory. Mohr completed the podium with Aryton Grim (Nitro Kart) in fourth and Prevail Perkins (Nitro Kart) in fifth.