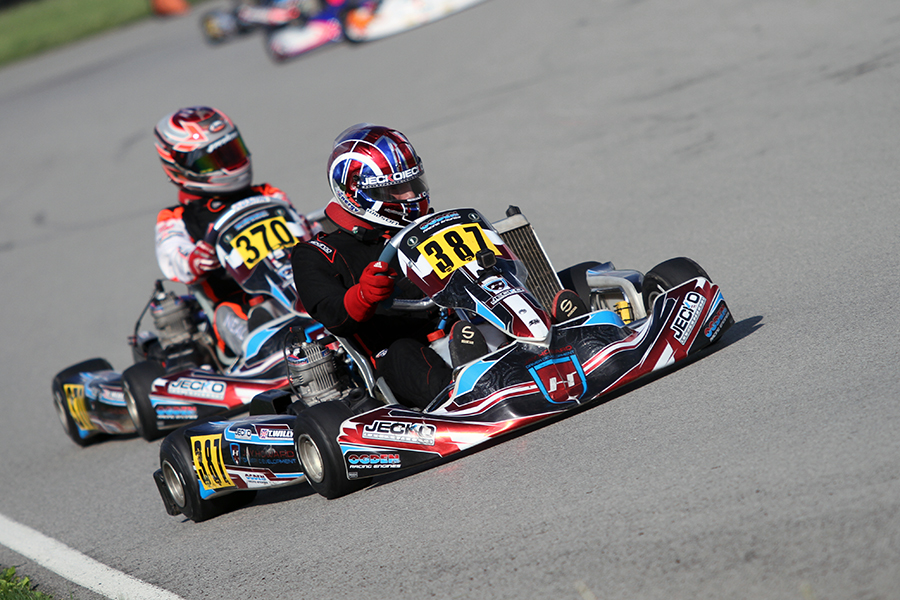 Teddy Wilson emerged as the top driver in IAME Senior for his second victory of the season (Photo: EKN)

There are sure bets within the sports and in many things around the world. One of them is that anytime a big event is held at the Pittsburgh International Race Complex, it will rain. Thankfully, the World Karting Association Bridgestone Manufacturers Cup Series made it through the practice day on Friday at the Wampum, Pennsylvania facility without a single drop of rain. Saturday was a unique day in terms of weather. It felt like being in Hawaii without the volcanoes or along Lake Michigan when the weather was changing with every minute. Throughout the day, it rain probably four different times from the morning to the time teams packed up to head back to the hotel. It left the paddock scrambling and scratching their heads as to what tires to run and setup to put on the karts. It provided some exciting drama while also extending the day for the a full qualifying, two heats and main event for all eight race groups. 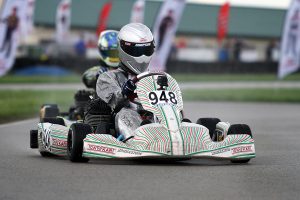 The IAME Senior category favored by being the last class in the order with the way the weather played out on the day. Qualifying was the lone session in the wet with Daytona winner and UK driver Teddy Wilson (JHDD / FA Kart) coming away from the session with fast lap. Wilson was shuffled back in the dry by GoPro winner Austin Garrison (Fullerton), who won both heat races with solid performances. The Final was really the first real session in the dry after rain hit the early portion of the round, taking time to dry out after a hard but quick shower passed through. Garrison led the field to the green and was challenged early by Senior rookie Elliott Budzinski (JHDD / Kosmic). Their battling allowed Senior rookie Colin Neal (JHDD / Kosmic) to remain close along with giving Wilson the opportunity to get back into the fight as he came up from seventh. Neal eventually took over the lead with Garrison and Budzinski slipping backward. Wilson followed him through, moving into the top spot and running away to score his second victory on the season. Neal ended up second for his best finish on the year. David Kalb Jr. (Kart Republic) had his best run of the year, fighting his way up into the third spot and holding off the advances from Austin McCusker (MDR / Kosmic) while Pauly Massimino (KSNA / Kart Republic), in his Senior debut, climbed up to fifth. Garrison ended up eighth while Budzinski retired early. 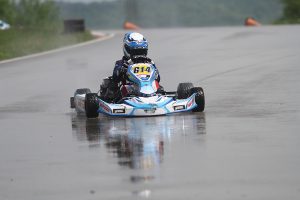 Quick all day in the rain, Kaden Wharff won both the Yamaha Junior and IAME Junior main events (Photo: EKN)

Andrew Patterson added his name to the list of winners in the new KA100 Senior category. Rain hit the track prior to their qualifying session, with GoPro double winner Blake Hunt (Fullerton) scoring the top spot. Hunt won Heat #1 while Andrew Patterson (Tony Kart) emerged in Heat #2 for the win, earning the pole position for the Final. That was all he needed as Patterson put down consistent laps in the wet to lead all 13 laps of the Final for his first career WKA victory, becoming the third different winner in the division. Hunt was a close second with Taylor Stanford (CompKart) completing the podium over Emory Lyda (Merlin) and Dakota Pesek (Top Kart). Meghan Peri (FA Kart) won the Yamaha Senior class over Cayla Chapman (Top Kart).

Kaden Wharff (Top Kart) doubled up on the day in Junior competition, winning both the IAME Junior and Yamaha Junior main events. The first came in Yamaha where he and Tyler Ferris (Top Kart) were the top two drivers once again. Wharff was top qualifier and won the opening heat with Ferris earning the second moto win and the pole position for the Final. Wharff jumped out to the lead on the opening circuit, and established a solid lead in what was a major downpour of rain in the early laps of the main event. In the end, Wharff led all 15 laps to a 10-second advantage for the victory. Tyler Lemp (CompKart) recorded his best finish of his career, advancing from eighth to second ahead of Ferris with GoPro winner Donald Whorton II (FA Kart) in fourth. Nico Montileone (Top Kart) was one of the fastest karts on the track, coming back from an incident on lap one to drive fifth. 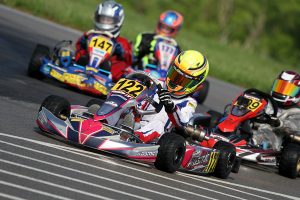 Jeremy Fletcher outran the Mini Swift field for his first victory of the season (Photo: EKN)

Wharff was not on the ball in the IAME Junior class throughout the day, placing sixth through both heat races after qualifying seventh. Ferris had the field covered with fast lap in qualifying and the two heat wins. The main event, on a drying track with the majority of the field on wet tires, was one of management. The track was drying quickly, and while the early laps were optimal for wet tires, the dry line continues to form and ate up the soft wet compounds. Wharff has been quick in the wet, and this was no different with the Indiana driver coming up to the lead in just three laps. Ferris fell down to fourth with Josh Green (Kosmic) becoming the driver in the challenge role. He kept close early, however, Wharff remained out front for the rest of the race to earn the victory. Matthew Duncovich (Kart Republic) recorded his best finish of the year in third, with Ferris fourth. The dry Bridgestone tires proved to be fast at the end of the race, with Caiden Young (Kosmic) knifing through the field in the closing circuits with fast laps of the race to climb to fifth by the checkered flag.

A number of drivers were in contention throughout the day in the Mini Swift division. GoPro winner Thomas Annunziata (Nitro Kart) was fast again in the wet and the dry, setting fast time in qualifying while winning the first heat race. Florida driver Jeremy Fletcher (Kosmic) came away with the win in Heat #2, as they filled out the front row. Annunziata was shuffled back early in the main event, while Sebastian Ng (Nitro Kart) jumped out front for the opening lap while Fletcher quickly responded to take the position. From there, Fletcher lead the remainder of the 13-lap race to score the victory by over six seconds. Dean Lambros (Benik) fight his way forward to second, with Annie Rhule (Energy) completing the podium. Mateo Rubio-Luengo (Benik) was fourth as Ng dropped to fifth. Rain hit the Yamaha Sportsman category with about six laps remaining. Annie Rhule (Energy) was leading however spun in the wet condition on dry tires, handing the lead and the win to Danny Dyszelski (Parolin). Rhule continued on to finish second with Sebastian Ng (Nitro Kart) third with Miles Murray in fourth. 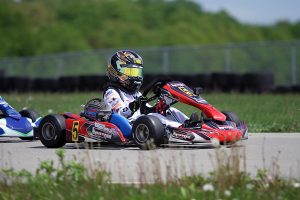 Gavan Boschele made it to the checkered flag first in Micro Swift for his first career victory (Photo: EKN)

Throughout the day, Ben Maier (Nitro Kart) proved to be the front runner for the victory in Micro Swift. Fast time in qualifying and win in Heat #1 began the day. Fighting for the lead in Heat #2 results in contact, and a DNF with Hoyt Mohr (Nitro Kart) scoring the win. Maier started the Final in fourth, and quickly put himself at the point with Gavan Boschele (Nitro Kart) and Mohr trailing. Leading on the final lap, Maier exited turn six wide and hit the curbing, and probably some of the mud just outside of it, and spun around. He watched as the rest of the field drove by, and he would not be able to continue to the checkered flag. This gave Boschele the lead and the victory, his first in WKA competition. Lucas Szabo (Parolin) gave a late effort for the win, coming up just 84 thousandths short at the line. Mohr completed the poidum with Aryton Grim (Nitro Kart) in fourth and Miles Murray (Nitro Kart) in fifth.

The Kid Kart class was won by Chase Groh. He was able to edge out Hudson Floyd on the final circuit for the victory. Colton McQuade completed the podium while Jacob Schaible and Matteo Franco-Ruggiero rounded out the top-five.