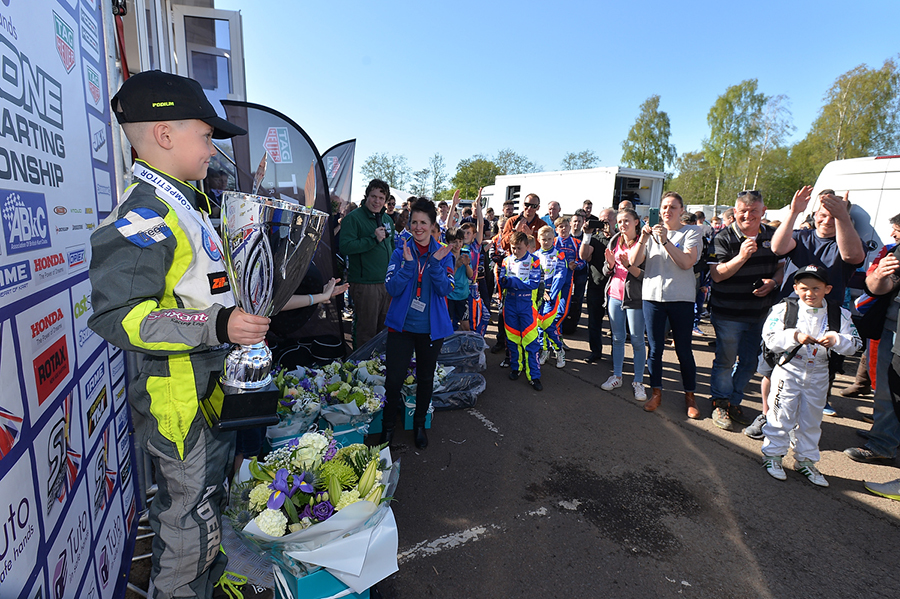 The third round of the 2018 Super One Series saw some outstanding racing for the IAME Cadet, X30, TKM and Bambino classes at the Scottish circuit of Larkhall. The weather stayed mild but cloudy for most of the event, which was the first of the year for the TKMs and Bambinos.

The next round will be at Clay Pigeon in Dorset on the first weekend of June for the Honda Cadet, Rotax, TKM and OK classes.

Freddie Slater took pole but with nothing to choose between himself, Arvid Lindblad and Maxwell Dodds. Lindblad won both heats though with Slater 2nd and Dodds 3rd both times.

From pole Lindblad led all of Final 1 with Dodds increasingly pressing, and in fact fastest, but not quite able to pull ahead. Slater had been 3rd but dropped back after a clash on lap 5, leaving 3rd to William MacIntyre, 3s behind.

It was the same story for the top two in Final 2 but Slater came through the field after a brilliant start to finish 3rd, while reeling Dodds in.

Rashan Chigorimbo took pole by 0.06s from Ivan Lomliev with Joshua McLean just 0.01s behind that. Lomliev won both heats though, with Chigorimbo dropping to 4th. Lomliev led two-thirds of Final 1 but McLean reeled him in and overtook on lap 12, with Joshua Rowledge following him through. Lomliev had his revenge in Final 2 with local driver Cian Shields 2nd by a second and Chigorimbo back up to 3rd ahead of Rowledge.

Lewis Gilbert staked his claim in Qualifying with pole, but Nelson King and Alessandro Ceronetti were on virtually the same pace 0.01s behind. Gilbert won both heats with Lewis Thompson following both times.

Gilbert was the early leader of Final 1 after starting on pole but Ceronetti reeled him in and went on to win. Dragan Pinsent worked his way through the chasing pack to finish 3rd, very close to Gilbert, while Clayton Ravenscroft was fastest and also gained several places.

Final 2 opened with a duel between Ceronetti and Pinsent before Ravenscroft and Teddy Pritchard-Williams made their presence felt, with the win eventually going to Pinsent. Caden McQueen gained nine places to finish 4th, and Ravenscroft was again fastest.

Lewis Malin took pole in another very close Qualifying session, 0.01s ahead of Oliver Hodgson, and all of the top eight within a tenth. Malin and Morgan Porter took a heat win each while Hodgson came in 2nd twice.

Porter and Malin battled for the opening stages of Final 1 before Malin dropped back, allowing Hodgson to swoop in and take the win ahead of Levi King and Sean Butcher.

Hodgson led all the way in Final 2 but was disqualified for technical non-compliance. Bradley Pennell was 2nd until four laps from the end where he was passed by Porter and King, with Porter inheriting the race win.

Spencer Stevenson and Daniel Butterworth finished on a dead heat in Qualifying with Stevenson taking pole with a faster second-fastest lap and reigning Champion Abbi Pulling just 0.01s behind them. Pulling took both heat wins with Oliver Richardson and Stevenson taking the runner-up spots.

Pulling held the lead from pole in Final 1 but Stevenson came through to attack and lead for several laps before Pulling regained the lead and Richardson followed her through.

After starting 4th, Butterworth won Final 2 ahead of Pulling in a hard-fought race which saw Pulling, Richardson and Stevenson all taking turns in the hot seat.

This has been the first round of the year for Junior TKM, but Pulling leads the points standings seven points ahead of Richardson with Butterworth 3rd.

Joe Fowler and Ross Deal were another pair to finish on the same time in TKM Extreme Qualifying, with Ryan Cole just 0.03s behind. Fowler won both his heats with the other heat win going to Louis Beaven.

Fowler led the first Final all the way from pole with Cole half a second behind for most of the race apart from a brief period where he was headed by Lee Whittingham.

Final 2 was under a yellow flag for three laps from the start after a crash at the bottom end, and Fowler again won ahead of Cole while Whittingham went out on lap 7, having already been passed by Joseph Reeves-Smith.

Fowler is the early leader after the first round of the Championship, seven points ahead of Cole.

Oscar O’Sullivan took pole in this first MSA Bambino race for the six- to eight-year-olds, leading Frazer Anderson by three tenths and Freddie Duncan just a fraction behind that. O’Sullivan and Anderson won a heat each with O’Sullivan on pole for the Prefinal by virtue of his better Qualifying.

Anderson then led the Prefinal from 2nd on the grid and went on to win by 2s from O’Sullivan. After a brilliant start Aston Sharp briefly took the lead at the start of the Final but Anderson regained control while there was a battle immediately behind him for 2nd, eventually gained by Skye Parker.