South Carolina’s Danny Dyszelski (Kaos Kart Shop) drove with poise on his way to sweeping Saturday at Pocono in both Formula Cadet and Mini Rok. Annie Rhule (Checkered Motorsports came up just short, but also swept second position in both classes as well. The final Formula Cadet featured a hard fought race between Dyszelski, Rhule, and Eli Trull for the top three positions. Trull had been disqualified from heat #1 on a technical infringement, while heat #2 resulted in a retirement for Rhule, setting the stage for a thrilling final battle in heat #3. 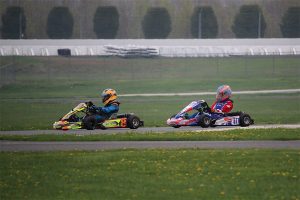 After a breakaway start, Dyszelski and Trull exchanged the lead multiple times. Rhule, fighting back from starting last, crept forward and eventually caught the two leaders, but was unable to make a move stick in the closing laps. Trull would finish 4th overall, while Jesse Coon (Kaos Kart Shop) would take the final step on the podium and Evan Slater (DRT Racing) rounded outthe top 5.

Mini Rok featured a tame race, but still exciting nonetheless. Going into the third heat with one win a piece, Rhule put the pressure on Dyszelski, but the Florida Winter Tour runner-up didn’t budge and came home with the victory. Ryan Stanton (CompKart) would finish a solid, yet distant 3rd while Evan Slater and Jesse Coon would again round out the top 5. Dyszelski takes over the Formula Cadet championship lead from Rhule by 13 points whileRhule hangs on in Mini Rok by just six points heading in to Englishtown on June 2.

The changing conditions on Saturday at Pocono Raceway were a challenge easily conquered by the TaG drivers, which yielded exciting battles in every class. The rain and fog also shook up the points table leading in to Englishtown. Formula Junior saw the biggest shakeup across its three heat races, seeing Chloe Chambers (Mike Doty Racing) capture the win in heat 1, but being relegated to the back of the field in the subsequent heats. Cole O’Connor (ItalKart) would win heat 2 after placing third in the first heat.The field came to green for the third heat in dry conditions, but Mother Nature had other plans and opened the heavens up three laps into the race. With the entire field on slicks, drivers tip-toed into turn 1, struggling to keep their karts on the asphalt. By the end of it, Justin White (KartWorkz/CompKart) grabbed his first heat win of the year plus the overall victory and championship lead. O’Connor and Chambers slipped to the rear, but still finished second and third overall, respectively. Dylan Christie (Mike Doty Racing) rallied back to finish fourth after losing an engine in practice. Calvin Wetzel (TonyKart) rounded out the top 5.

Not to be outdone, the first heat of Formula TaG had to be suspended after heavy fog suddenly rolled in, making visibility nearly zero. Once the racing resumed, it did not disappoint. Remo Ruscitti (ItalKart) dominated the first two heat races, but had to work a little harder in the third race as championship leader Ryan Raffa (Full Tilt Racing) stole the final heat win. Lance Fenderson (Solo Kart) came home in third, Kyle Apuzzo (CompKart) in fourth, and Scott Saunders (DRT Racing) rounded out the top 5. 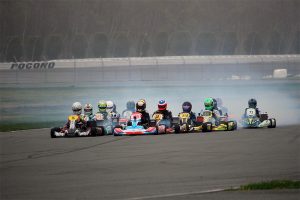 Formula 125 had the largest class of the day, with 25 karts coming to the green. An incident-marred race saw Brendan Burcroff (Kompetitive Kartsport) charge from 11th to the win in the first heat, which he also defended in the second race. A change to wet tires resulted in the Swiss Hutless driver slipping to fifth, but it was enough to take the overall win. Ryan Paul Miller (Kosmic) drove consistently, taking runner-ups in all three heats and the overall classification. Jared Burchette (Kaos Kart Shop) stormed to third overall and the final heat win after failing to start the first heat. Taylor Oshaughnessey (DRT Racing) held onto fourth overall, failing to start the final heat, and Galo Barros (TonyKart) took home fifth.

In the Formula 125 Ironman classification, points leader Paul Montopoli (CompKart) suffered a massive crash in qualifying, forcing him out for the rest of the weekend. Heinz Keller (TopKart) capitalized, staying consistent and out of trouble for the overall win, followed by Tom Gerstner (PCR) and Joe Lattanzi (Full Tilt Racing).

Locking down the pole in qualifying and taking victory in the pre-final at Pocono, it looked like Kyle Apuzzo (Checkered Motorsports/CompKart) was going to have an easy day at the office. Mother Nature had other plans, however, as the rain came down heavy just before the final.

After qualifying a quiet fifth and finishing runner-up in the pre-final, Lucio Masini (CRG) swept by Apuzzo in the torrid conditions. The Rhode Island native fought hard to stay within striking distance, but Masini held his ground and took home his first win of 2018. The podium was rounded out by Brian Chatfield, a distant 3rd.

The series return to action June 1-2 at Englishtown.