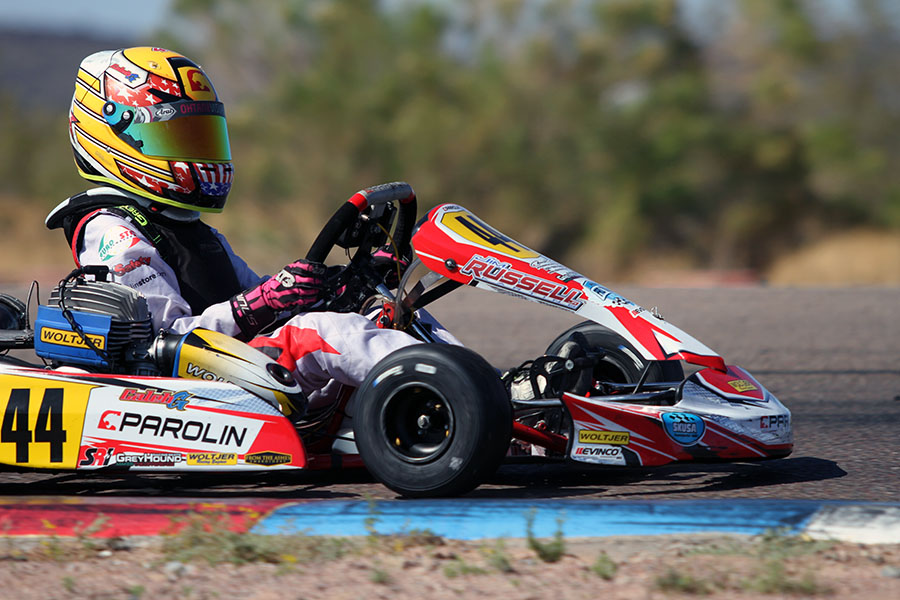 The first half of the 2018 season has seen seven victories for Caleb G, including one at the 2018 SKUSA Pro Tour SpringNationals (Photo: eKartingNews.com)

It has been a busy first half of the 2018 season for Cadet racer Caleb Gafrarar. The Jim Russell Jr. Karting / Parolin driver has hit all areas of the southern portion of the United States, competing in five different series at seven unique facilities. While busy, the journey has also been educational and successful, earning 12 podium finishes, including seven victories to match his major victory total from the 2017 season. During this season span, the nine-year-old has already earned a series championship, adding to his growing career resume. 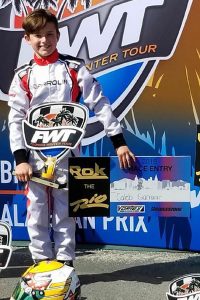 The first three months of the 2018 season were spent in Florida, competing in the two prominent winter karting programs for North America. The SKUSA Winter Series hosted its inaugural two events at AMR Homestead-Miami Motorplex presented by MG Tires and the Ocala Gran Prix facilities. Gafrarar stood on the Micro Swift podium in both races down in South Beach, placing third and second in the two rounds of competition. In February, Caleb G visited the Ocala, Florida facility, placing on the podium once again in third while a DNF on Sunday hurt his chances for the series championship. Gafrarar finished third in the point standings.

January also marked the start of the famed Florida Winter Tour with Rok Cup USA. Gafrarar competed in the Micro Rok division, with the first at the Palm Beach Karting facility in Jupiter, Florida. Gafrarar ran inside the top-two all weekend, capping it off with a nine-second victory for his first FWT triumph of his career. The second event took place in Ocala the weekend after the SKUSA event. Caleb G had one mishap all weekend in one of the heat races. The other sessions, Gafrarar was P1, earning the main event victory after leading all 20 laps. March hosted the third and final event of the series at the Orlando Kart Center. Caleb G swept the weekend – highlighted by leading all 15 laps of the main event – to clinch the series championship. With his title, Gafrarar earned a race entry to the ‘Rok the Rio’ Rok Cup USA event at the Rio All-Suite Hotel & Casino in Las Vegas, Nevada at the end of October.

Before earning that title, Caleb G headed west to the NOLA Motorsports Park to begin the 2018 Superkarts! USA Pro Tour. The SKUSA WinterNationals hosted the first two rounds of the major championship with Gafrarar among the favorites in the Micro Swift division. Caleb G began the opening round with fast time in qualifying before ending the Prefinal in second. The Final went down to the wire with Gafrarar securing the victory, the second Pro Tour triumph of his career. Point standings leaving the WinterNationals put Gafrarar in a tie for the lead, his best position in the SKUSA Pro Tour championship chase to date. 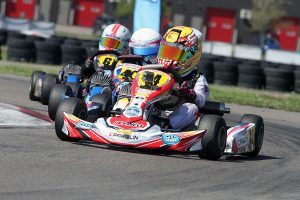 The second event took him further west to begin the month of May at the SKUSA SpringNationals held at the Phoenix Kart Racing Association. It was the second career visit to the Glendale, Arizona facility for Caleb G, returning back to the site of his SKUSA Micro Swift debut. The opening round was a near repeat of the SpringNats, with Gafrarar ending the day on top of the podium for his third career SKUSA victory. Sunday began with Gafrarar in the top-five after qualifying and working his way forward in the Prefinal. An issue on the grid kept him from leaving with the rest of the field. Able to get his powerplant fired, Caleb G rejoined the field in the last position as they took the green flag. Gafrarar worked his way forward into the battle for third, eventually losing the final step on the podium to Parolin teammate Ethan Ayars.

Caleb G is competing in a fourth series during the 2018 season, returning to the United States Pro Kart Series. Their first event took place in April at the Ocala Gran Prix. Caleb G was in the top-two all weekend long. For Round One he earned a top qualifier award, placing second in the Prefinal and coming away with his second career USPKS victory in the main event. Sunday was a runner-up day, placing second in all three on-track sessions and currently sits second in the point standings. Prior to that weekend, Gafrarar traveled for a one-off event with the Texas ProKart Challenge at the end of March. Caleb G visited the new Speedsportz Racing Park in New Caney, Texas outside Houston. The two day event was a sweep, placing first in all the Micro Swift on-track sessions for his first victory in the Lone Star State. 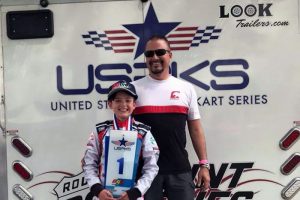 The busy first five months of the year lead into a more laid back summer season, featuring five events between now and August. This weekend, Caleb G heads to the Rok Cup USA Festival at the NOLA Motorsports Park. A month later, Gafrarar gets to defend his home track of GoPro Motorplex for the second event of the United States Pro Kart Series in Mooresville, North Carolina. July features back-to-back weekends with the Rok Cup USA Festival at the Oakland Valley Raceway Park in Cuddebackville, New York on July 20-22. The following weekend takes Gafrarar to the New Castle Motorsports Park for the USPKS finale. Two weeks later, the SKUSA Pro Tour comes to an end with the SummerNationals at the same New Castle, Indiana facility where Gafrarar will attempt to claim his first SKUSA title.

A special thank you to the Mazda Road to Indy USF2000 race team Newman Wachs Racing for inviting Caleb G as a team guest during the recent IndyCar Grand Prix weekend at the Indianapolis Motor Speedway.

Caleb would like to thank the following companies for their support toward his racing program; Parolin Racing, Jim Russell Jr Karting, Woltjer Racing Engines, Chuck G Fabrication, SpeedLab Graphics, From the Ashes, Stock Car Steel/SRI and Greyhound Seats. Visit the Caleb G Racer Facebook page to follow his progress throughout 2018 and his website www.calebgracer.com to learn more and purchase the available apparel to support his racing campaign.