The calendar may have said Mothers Day weekend. But the temperature was more like the 4th of July, as the Maxxis 4 Cycle Sprint Series made the first of their 2 stops at the famed Lamar County Speedway in Barnesville, Georgia for Race #3 overall on the season. 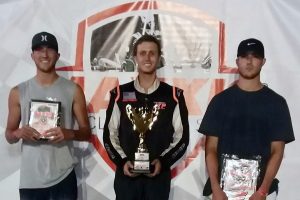 Much to the surprise of many who have been a part of the 4 Cycle industry for quite some time, well-traveled, and successful racer Corey Towles was making his first ever appearance at the historic Georgia facility. And much like most other facilities, Towles took little to no time in mastering the legendary track, taking both the Andy Jones Motorsports LO206 Senior and LO206 All Pro classes.

Towles swept the top qualifying honors in Senior competition earlier in the day, then added another bonus point by winning the heat race, thus starting on the pole for the evening main. Running in conjunction with the Georgia Sprint Karting Association, which held a day race for their club in the 90+ degree weather, Towles had a chance to shake down his kart during Club racing action, then take to the evening course, winning the main under the lights, finishing ahead of Tyler Lloyd, Aren Lloyd, Austin Williamson, and Tyler Swann. With his second place run, Tyler Lloyd now leads brother Aren by a slim 1 point margin, with the season pretty much reaching its halfway point. Swann is just 15 points back in third.

The LO206 All Pro main was a mirror image of the Senior competition, with Towles checking in for his second win of the night, topping Tyler Lloyd, Aren Lloyd, Austin Williamson, and Tyler Swann. Swann now leads the All Pro points by 41 over Aren Lloyd, with Tyler Lloyd and Williamson the top 4 in the standings. 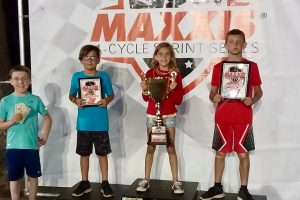 While Towles was adopting to the course, young Lanie Buice was on the rebound. After winning the season opener at Jacksonville in the Brads Karts and Parts LO206 Cadet class, then struggling in race 2 at Kershaw, Buice got her mojo back, winning a battle in lapped traffic, taking down her second Cadet win of the season, thus earning the initial $250 payday, as Cadet was the featured class for the weekend, then an additional $75 from Lloyd Racing, bringing her total to $325 for the night. Owen Lloyd continued to maintain his consistency in the class, coming home second, for a $200 payday, with Brently Miller earning $140 for third. Lane Littleton also earned $35 for his 4th place finish as well, with Peyton Bridges rounding out the top-five. Making up the top ten were Carson Weinberg, Kershaw winner Cameron Weinberg, Logan Buice, Mike Chidester, and Blake McGinnis. Lloyd now holds a slim 1 point margin over Cameron Weinberg, with Brently Miller and Lanie Buice just 4 points back. Bridges rounds out the top 5, only 9 points in arrears.

Elmer Edmonson made it 2 wins in a row in the Brads Heating and Cooling LO206 Junior class, topping points leader Will Meeler. Edmonson made it a clean sweep, taking the top qualifying effort, the heat, and the main, as he looks for a redemptive return to Jacksonville, site of the only track on the series that has eluded him to date. Meeler currently holds a 41 point edge over Edmonson after 3 races. 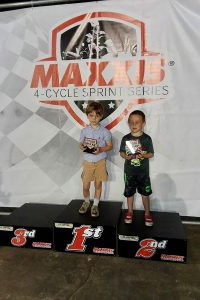 They say it only takes 2 karts to make a race. Nothing could have more true than in Kid Kart competition. After 2 races where young Jaydyn Wilson has steadily gained confidence and increased driving ability, Jaydyn was able to use those tools against newcomer Milo Chiecchio. While the pair ran under the lights for the first time, the Barnesville course threw its challenges at the young duo, so much so, that one would stop on the track if the other spun out, thus allowing for the other to recover and continue to make it a race. This show of sportsmanship continued into the main event. Whether it was by accident or plan, the actions of these two young hopefuls sent a resounding and spirited message to those who watched the event. While young Milo claimed the win, it was clear on this night, there were two winners in more ways than one!! Special thanks to the parents of these fine young drivers for providing wonderful entertainment and true sportsmanship to the crowd that was proud to watch them.

The Diversified Plumbing Services LO206 Masters topped the evening off with a spirited 4 kart battle for the lead for the better part of the event, until troubles in turn 1 late in the event, spread the field out. After taking down the club event earlier in the day, veteran Bob Barthelemy showed his prowess on the Lamar County Speedway surface, taking his first Maxxis win of the season, topping points leader Joey Miller, Barry Hastings, Chris Carroll, and Tyson Swann. With his second place finish, Miller holds a slim 3 point edge over Hastings, with Tyson Swann just 12 points back in third.

In the ongoing battle for chassis supremacy, Razor scored 3 wins, thanks to Buice in Cadet, Towles in Senior, and Barthelemy in Masters, while Towles gave Comet their third win of the year with his win in All Pro action. Here’s a look at the updated Chassis Standings: 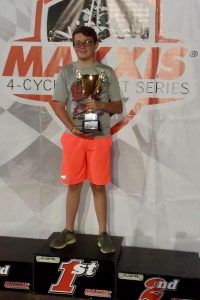 Special thanks to Stevie and Stacy Roberts of Roberts Kart Shop for providing awards to the top qualifiers, as well as $50 to each driver who won the pole.

With the third race in the books, the series makes a return trip to 103rd Street Sports Complex in Jacksonville, Florida, where the LO206 Masters Class will run for a $500 to win payday. Second place will pay $250, with $125 going to third.

Additionally, the series will add a Pro Gas Class for the LO206 Cadet competitors. These drivers will run through the same process as the points classes, running 3 rounds of practice, qualify, a heat race, and a main event. Since this is a Local Option class, competitors will not be required to come to qualifying with a new set of tires. Entry fee for the class will be set at $20.

With a return to Jacksonville, which also hosts several 2-cycle classes, the local drivers in these classes will also be welcomed to attend and be a part of the Jacksonville program, which also serves as the latest points race for North Florida Kart Club.

For more information on Race #4, as well as any info on the Maxxis 4 Cycle Sprint Series, contact Buddy Long at buddy@goldspeedusa.com.