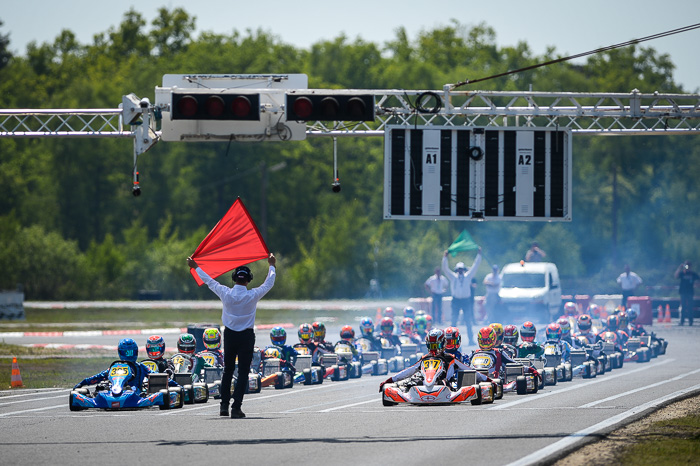 The first of two events of the 2018 KZ & KZ2 European Championship took place at the Salbris circuit with around 100 international participants. Well represented with 15 karts entered, the Sodi chassis once again performed well throughout a very difficult weekend. In KZ2, the CPB Sport team driver Adrien Renaudin scored a magnificent victory while Hubert Petit, a 100% private driver, was on the third step of the podium. In KZ, the two factory drivers of the SODI team, Anthony Abbasse and Alex Irlando, finished in style in 5th and 6th places. The fight for the European title is now fully engaged for Sodikart.

With 13 chassis at the start of the KZ2 European Championship, Sodikart was the second most represented brand at Salbris. We know about the success of the French brand on home territory, but its reputation extends well beyond the borders of its country of origin, as drivers from Greece, Lithuania, Estonia, Spain and Norway had chosen to trust the products from the Nantes factory.

Sodikart does not get directly involved in the KZ2 competition. This is the reserved area for ​​private teams and pure amateurs. It is a great satisfaction for the French brand to contribute indirectly to the success of some of them with the quality of its product. CPB Sport, the Sodikart satellite team, runs its karts completely independently, as do the other teams. The common elements between the teams, big or small, is the cooperation between them and the reassuring presence of the Sodi Racing Team. Information circulates easily between all Sodi drivers, both in KZ and KZ2, and everyone benefits and progresses faster.

In the sun and increasing heat at Salbris, Adrien Renaudin (Sodi / TM) achieved a superb run in the lead of the Qualifying Heats, followed by Hubert Petit (Sodi / TM), both dominating fierce competition. For the CPB Sport team as well as that of the small team with the limited means of Hubert Petit, the Sodi chassis worked wonders. Renaudin made a magnificent solo run at the front of the Final and won with the fastest lap in the race, while Petit ensured an excellent 3rd place. Gillian Lay (Sodi / TM) completed CPB Sport’s success by reaching 8th place after a tremendous comeback from his 29th time in Qualifying. Thomas Landais (Sodi / TM) posted his best performance of the year in 16th, as did Jean Nomblot (Sodi / TM) recovering from 45th in 23rd. The other finalists, Brad Benavides (Sodi / TM) and Tom Leuillet (Sodi / TM) encountered setbacks on the track.

In the colours of the Sodi Racing Team, Anthony Abbasse proved to be very competitive, but lost time in the tight battle of the heats, while Alex Irlando had an excellent top 10 in his first appearance in KZ. They improved both their score in the Final by finishing 5th and 6th respectively in this very intense competition.

Competitors are now eagerly awaiting the Lonato race in Italy in mid-July to confirm the excellent performance of Sodi chassis at the European level.