Birel ART Kicks Off the European Championship Strongly with Longhi 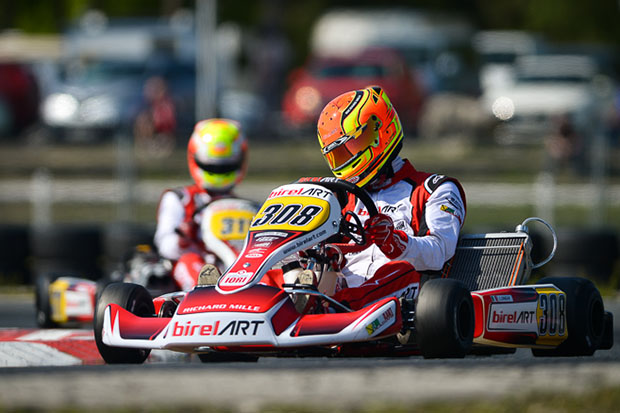 The Birel ART team clearly displayed a very high level of performance at Salbris at the opening of the European Championship, especially in KZ2. The provisional leader on Saturday night, Riccardo Longhi experienced an incident that deprived him of a possible victory. But the points scored by the Italian during the French Kart Grand Prix will be important during the next race at Lonato!

After the European opening of the OK and OK-Junior categories, the European Championship for KZ and KZ2 started at the Salbris circuit, which was back on the international scene after many years without a major event. At the beginning of the meeting, the Birel ART chassis were at ease, both in KZ and KZ2. Marijn Kremers set the 5th fastest time, while Riccardo Longhi was in 2nd place in KZ2.

Podium within reach
For Longhi, the Qualifying day on Saturday turned into a magnificent display, with three wins and a 2nd place. Unfortunately, a small issue complicated the situation on Sunday morning, as explained by the team manager Davide Forè. “A collision in the last heat deprived Riccardo of a possible pole position for the Final. He had to start from the third row. At this level, the drivers are so close to each other, he could not recover as he wanted in the Final. We can not rewrite the story, but I think Riccardo had his place on the podium, maybe on the top step. Nevertheless, he scored important points in Salbris. The Championship has two meetings and I am very confident about our ability to achieve a great performance in July in Italy, at the Lonato circuit where Longhi is always very fast.”

Birel ART also welcomed the flawless collaboration with the KSW team, importer Birel ART in Austria. “William Lanzeni had to use his second set of new tyres in the last heat to secure his qualification. That did not prevent him from making a gain of 13 places in the Final, from 32nd place to 19th! Alexander Dahlberg also had an excellent pace at Salbris. He was 7th after the heats and was on the way to a good position, when a collision put him out of the points.”

Regrets in KZ
“We were very well prepared for this European Championship,” continues Davide Forè. “We had to adapt to the Salbris circuit, where nobody had many references, and the LeCont tyres, which are different from the brands we used in 2017 and at the beginning of the season. In this context, the fastest lap set by Marijn Kremers during the KZ Final says a lot about the potential of the Birel ART chassis, our technical partners and all the mechanics and staff, who I would like to thank for their involvement.”

“Marijn unfortunately had too many incidents to fight for the podium. I would like to congratulate Rick Dreezen, who managed to come back from 15th to 10th in the Final. As for Bas Lammers, I am happy to see such a talented driver in the colors of Birel ART Racing KSW. He had to make his mark with us and learn about his new chassis and immediately found himself at an encouraging 12th place after the heats. He had to retire in the Final, but along with Birel ART Racing President Ronni Sala, we are confident of his ability to aim high in the future.”