CRG and Jorrit Pex on the Podium in KZ at Salbris 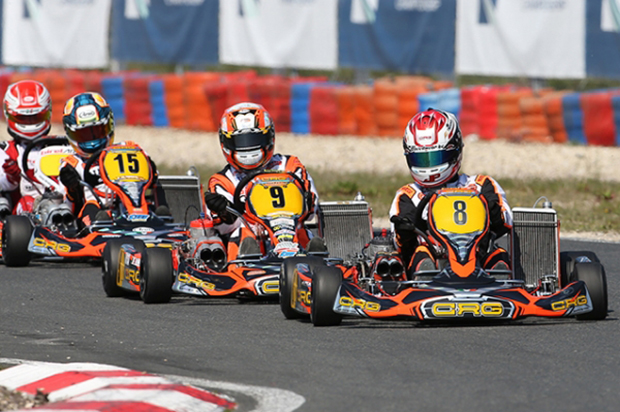 The first round of the KZ European Championship in Salbris has had an exciting final, as Jorrit Pex ended his race in second place and Paolo De Conto in fourth. Pedro Hiltbrand forced to the retirement from the lead. Top ten finish in KZ2 for Benjamin Tornqvist.

CRG has been a strong protagonist during the opener of the CIK-FIA KZ and KZ2 European Championship in Salbris (France), where Jorrit Pex claimed a great P2 in the Final, after dominating the whole weekend, while Paolo De Conto was fourth. These results only partially rewarded the efforts of the Italian outfit, that could have obtained a more round result.

The KZ final lived on an endless series of surprises and CRG drivers have been the the main protagonists throughout the race. A great Jorrit Pex got the lead of the race early on, after dominating practice and all the qualifying heats. He was followed by marque-mate Fabian Federer of team SRP, and by an excellent Pedro Hiltbrand, who has also been protagonist at the European Championship in OK and in Salbris had a great start from the third spot of the grid. Paolo De Conto in this occasion struggled a bit more instead. He started the Final from P6 due to several hiccups in the heats, while Stan Pex was seventh on the starting grid of the final, but recovering ground. Surprisingly, Pedro Hiltbrand installed himself on top early on and at that point CRG had five drivers in the top six.

The situation changed two thirds into the race though, when De Conto, who was third, had to concede his place to Stan Pex, and then Hiltbrand had to retire when only five laps were left to go, handing the lead of the race to Iglesias, who meanwhile had recovered well from the starting P5. Federer also had to retire due to an incident, as happened to Stan Pex, and therefore CRG final result saw only Jorrit Pex closing on the podium in P2 behind Iglesias, with Ardigò third, and Paolo De Conto had to settle for P4. The challenge will resume from Lonato for the second and closing round to be held on July 15th with all results are still possible.

KZ2. The best of CRG drivers in KZ2 was the Swede of CRG Holland Benjamin Tornqvist, who has been second in International Super Cup last year and among the quickest in this opener of the European Championship with the final 10th place, while the French Arthur Carbonnel was 15th. Regarding the drivers of the Racing Team, the Swiss  Jean Luyet was 18th and the Spaniard Kilian Meyer 24th, while Emilien Denner was handed a penalty on Kalì-Kart after winning the closing heat on Sunday morning. Despite a good result in the closing heat, Alessandro Giardelli missed out on qualifying for the final, as did Gerard Cebrian Ariza, Filippo Berto, Enrico Prosperi, Marco Valenti, Arto Ojaranta and Marc Lopez.

The next round of the KZ and KZ2 European Championship will take place in Lonato, Italy, next July 15th.