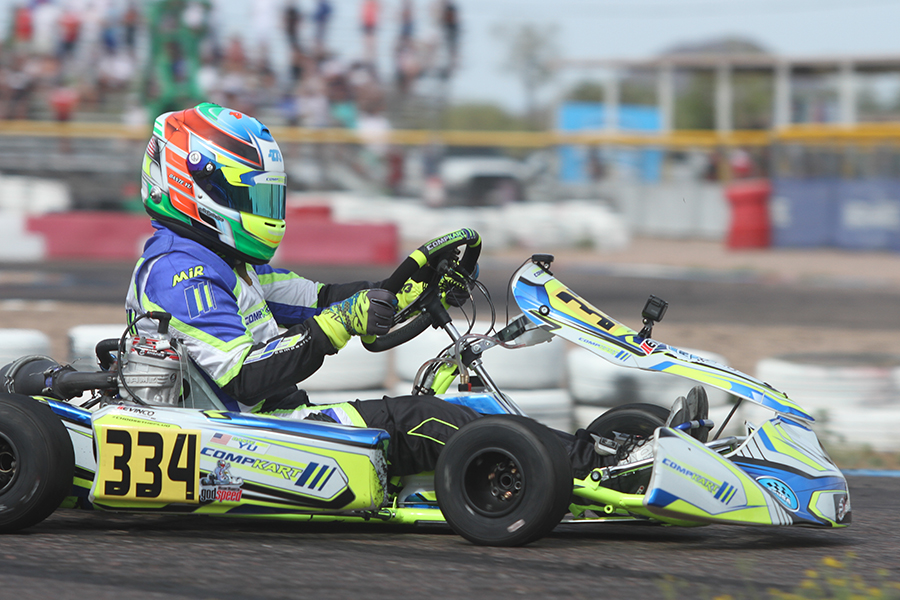 It is the end of a long, hot and busy weekend at the Phoenix Kart Racing Association facility for all the competitors at the Superkarts! USA Pro Tour SpringNationals. It reached record highs in the Glendale, Arizona area, topping out at 106 degrees, making it a challenge for the officials, racers, team members and family in attendance. No dust devils hit the paddock, and clouds actually covered the track, however, the conditions were some of the toughest in SKUSA Pro Tour history. Emerging from the battles on the day included Dante Yu and Nic LeDuc as victors in the headline categories.

It was a near perfect day for Dante Yu in the X30 Senior division. Yu began as the driver to beat on the day, setting fast lap in qualifying. The CompKart driver posted a 46.404-lap to secure fast time, with the top-four separated by just 59 thousandths of a second. Yu remained at the front, leading all 15 laps for the Prefinal win ahead. Pulling away on the opening laps of the Final, Yu went unchallenged in the 25-lap Final for his first SKUSA Pro Tour victory. Jake Craig (RPM / Tony Kart) crossed the line in second for his third podium of the season, ahead of Saturday winner and two-time defending champion Ryan Norberg (PSL / Birel ART). Brenden Baker (CRG Nordam) had his best result of the season in fourth with Canadian Ryan MacDermid (Prime / Birel ART) winning the fight for fifth. Sonny Cervelli (Tony Kart) grabbed the hard charger award, up 27 spots to seventh, right behind Senior rookie Trey Brown (Nash / FA Kart). 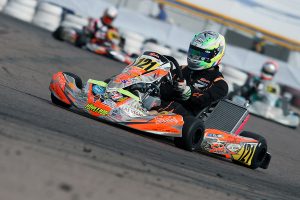 Last year, Nic LeDuc (SodiKart) secured his first SKUSA Pro Tour victory of his career. A year later at a different track, LeDuc repeated that victory. Hauling his kart down from NorCal in the back of his truck, LeDuc became the fourth different winner on the season in the S1 division. Billy Musgrave (MRC / Aluminos) set fast time in qualifying and won the Prefinal unchallenged with LeDuc trailing. Musgrave grabbed the holeshot, and only led the first few laps before LeDuc took control. Consistent laps gave LeDuc a solid lead, driving away to the victory. Rory van der Steur (Tony Kart) overcame qualifying issues, working his way from last to second on the day to earn another podium finish on the weekend. Saturday winner Kyle Wick (RPG / CRG) ran third with Austin Garrison (FW / CompKart) charging through the field from 12th to fourth with the fast lap of the race. Hunter Pickett (Aluminos) ended up fifth with Musgrave down to sixth at the end of the 25-lap run.

The S2 Semi-Pro Stock Honda was a battle all day. Michael Ilavia (3G / Birel ART) broke up the perfect weekend for Pedro Lopes (RPG / Kosmic) with fast lap in qualifying, edging out the Brazilian by three hundredths of a second. Lopes was able to secure the win in the Prefinal, however, Ilavia started out the Final with the holeshot. Max Hewitt (Alpha) worked past Ilavia for the lead with Lopes slipping past for the second spot a few laps later. That same lap, Cameron Egger (RPG / Kosmic) tried to take third from the Texan, however, contact was made. Egger retired with Ilavia dropping to the back of the field. That allowed Hewitt and Lopes to run away. Lopes appeared to be pushing extra hard, while Hewitt began to fall off at the end. Lopes worked by Hewitt late, taking the lead and the victory for his fourth straight. Hewitt crossed the line second, however, was underweight and thus removed from the results. That promoted Blair Hosie (Alpha) to second and moved Keawn Tandon (DRT / DR Kart) to third. Ilavia was classified fourth with Matthew Paesch (CompKart) in fifth. 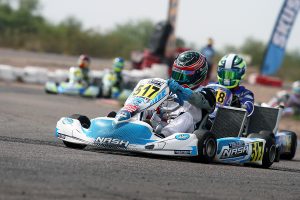 It was a tough battle in the X30 Master category as well. Brazilian Leonardo Nienkotter (CompKart) was the driver to beat throughout the first portion of the day with fast time in qualifying and winning the Prefinal. A number of pushback bumper penalties in the Prefinal shook up the starting order. As the field came out of the opening corner, Gustavo Michelsen (Tony Kart) came out as the leader on the opening lap until Lopes took over the top spot. Nienkotter fell down to seventh, while Matt Johnson (Nash / Tony Kart) climbed up the order. Waiting for his time, Johnson took over the lead and went on to score his first Pro Tour victory. Lopes settled for second, his fourth straight podium of the season. Nienkotter fought back to third with Jonathan Silva (FW / CompKart) in fourth and defending champion Derek Wang (RPM / FA Kart) in fifth.

Defending S4 Master Stock Honda champion Jordon Musser (3G / Birel ART) swept day two of the SpringNationals to solidify his run at another title. Musser was kept on point by Ryan Kinnear (DKC / SodiKart) throughout the day, however, Musser never gave up the point to earn his second victory on the weekend. Kinnear settled for second however grabbed the 10 bonus points for fast lap of the Final. Terry Lawrence (LEM / Formula K) held off Ben Schermerhorn (Birel ART) for the third step on the podium with Vivek Tandon (DRT / DR Kart) in fifth.

John Crow (MRC / Aluminos) established himself as the top driver in the S4 Super Master Stock Honda championship chase. Crow swept Saturday and continued on Sunday, with a perfect score on the day. Crow once again set fast time overall in qualifying and throughout the Prefinal and Final races. Rod Clinard (CRG Nordam) ran a solid pace all weekend to run second to Crow with Nick Firestone (DRT / DR Kart) fighting back to third on the podium. Mike Jones (DKC / SodiKart) ran fourth with Victor Jimenez (RPG / Tony Kart) in fifth. 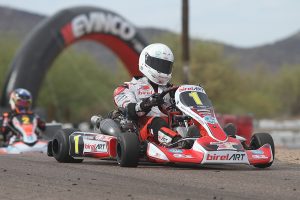 The X30 Junior category was interupted with two red flags on the day. The first came in the Prefinal with Frankie Mossman (CompKart) suffering a broken arm following contact in turn 10. Tyler Maxson (CRG Nordam) scored the win over Saturday winner Arias Deukmedjian (LEM / Tony Kart) in second. Top qualifier Jonathan Portz (Nash / FA Kart) fell down to the 11th spot. Maxson led early in the Final until lap six with Deukmedjian taking over the lead. A red flag for a wreck including John Burke (Tony Kart) bunched the field up with 10 laps remaining. Arias held on throughout the restart and the final laps to claim his second victory of the weekend. Maxson crossed the line second, handed a five-second penalty for a jump start, dropping him down to sixth in the order. Portz fought his way forward, moving up to the second spot on the podium ahead of Jeremy Fairbairn (JHDD / Tony Kart). Mackenzie Clark (Prime / Birel ART) ended up fourth with fellow Canadian Thomas Nepveu (PSL / Birel ART) in fifth. Reece Gold (FA Kart) advanced 31 positions to 11th in the Final for the hard charger award.

It was a wild day in the Mini Swift category, beginning with a scary wreck for defending champion Carson Morgan (Kart Republic). The Saturday winner qualified 10th and was in the middle of some jostling for position on the opening lap of the Prefinal when his kart flipped over across the start/finish line. Morgan was able to get the kart off him and walk away, however, suffered a broken nose from the hard impact. He would not continue the rest of the day. Top qualifier Noah Baker (Kart Republic) was part of a great battle for the Prefinal win, with Kai Sorensen (Benik) taking the top spot over Jack Jeffers (Benik), Alex Powell (Energy) and Baker. Diego LaRoque (Energy) replaced Powell in the lead pack during the Final as the young drivers put on another show. On the final lap, it was Sorensen and LaRoque side by side in turn 11. Slight contact was made to slow there pace, with Jeffers getting a little bogged down as well. This allowed Baker from fourth to slip past all three into the final corner and reach the checkered flag for his first SKUSA Pro Tour victory, the second on the weekend for the Kart Republic. Jeffers finished second with Sorensen completing the podium. LaRoque settled for fourth and fast lap of the race with Christian Miles (Formula K) completing the top-five. 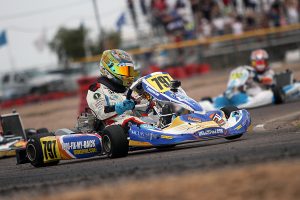 It was a tight battle all day long between Ben Maier (Nitro Kart) and Max Garcia (Benik). Garcia earned fast time in qualifying by just one hundredth of a second over Maier. In the Prefinal, Maier was able to beat Garcia to the line, however, a five-second penalty dropped him to fourth in the order and gave Garcia the win. It move Ethan Ayars (Parolin) up to second with Caleb Gafrarar (Parolin) in third. Gafrarar was late off the grid with engine issues, and rejoined the field as they got the light to begin the Final. He worked his way through the field quickly as Ayars led Maier and Garcia at the front. Once Maier and Garcia worked past Ayars, they pulled away from him while Gafrarar worked his way to fourth. Garcia was never able to make a move on Maier, with the Nitro Kart driver scoring his second victory of the season. Ben continued his streak of winning at every event in 2018, extending it to now seven for a total of eight victories. Garcia settled for second, however, earning fast lap of the race to claim a total of 40 bonus points on the weekend. Ayars was able to beat Gafrarar to the line for the final step on the podium with Logan Julien (Merlin) completing the top-five.