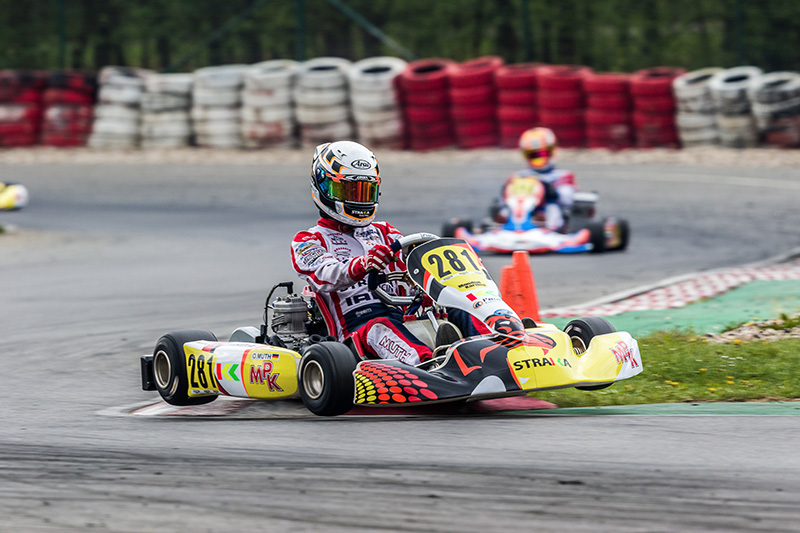 With no fewer than 186 drivers entered, the second event of the IAME Series Benelux again offered a magnificent spectacle on the karting circuit at Spa-Francorchamps. On a track sometimes dry and sometimes damp, discussions were extremely animated on the last weekend of April! Despite the changeable conditions, overall the favourites held their own.

Like the opening event at Mariembourg, at Spa-Francorchamps too it was necessary to be skilful in all conditions. After qualifying practice and the first qualifying heats contested on a dry Saturday, the rain came down on Sunday morning, forcing some classes to compete in their second qualifying joust on a soaked circuit. The finals themselves were contested on slick tyres.

In parallel with his participation in the Formula 4 Championship of France, O’Neill Muth continues his training as a kart driver. The fastest in qualifying practice on his first appearance in X30 Senior (14-30 years), nevertheless the “Best Rookie” was only classified in fifth place at the end of the qualifying heats, dominated by the Dutchman Joey Van Splunteren. But in the Final, the former Belgian Cadet Champion soon grabbed the race lead, which he never relinquished, despite the valiant efforts of Olivier Palmaers, in an excellent second place. Taking the third step on the podium, Van Splunteren scored good points and widened the gap in the championship after his victory in Mariembourg. Behind them, there was a great battle between the French drivers Jules Mettetal and Xavier Dias. It finally turned in Jules’ favour after Xavier (10th) copped a 5-second penalty, as a result of a spoiler coming loose after a collision. That decision benefited Mattéo Raspatelli, who completed the Top 5 after climbing nine positions. He was just ahead of a group composed of, in order, Ries Viverette, Xavier Handsaeme, Tuur Stalmans and Bastien Cochet.

This was what is called a perfect weekend! Having achieved the best qualifying time in this category reserved for young people between the ages of 12 and 15, Enzo Lévêque justified his standing as leader of the IAME Series Benelux by winning the 40 points awarded to the leader after the qualifying heats. The French driver also won the Final after a breathtaking fight against Sam Balota. Whilst he had taken the lead on the last lap, the Belgian had to settle for being runner-up by 41 thousandths. Hot! Starting in seventh place, Ben Fayers from Britain beat Valon Janssen and Alessandro Tudisca for third place. His compatriots Zacharias Ripley and Alfie Prince were 6th and 7th ahead of Noah Maton, Frenchman Victor Bernier and Lorens Lecertua respectively. In the provisional classification for the championship, Lévêque logically leads the dance with two Finals won out of two. But in mid-season, the title hopes of his opponents are far from lost!

X30 Cadet: Furon-Castelain gains a hold on the championship

Like the X30 Junior category, first place was closely contested in the X30 Cadets (10-13 years)! On pole position after qualifying, Olivan Fayt could not repeat the speed he enjoyed during the qualifying heats. In contrast to Victor Louis and Maxime Furon-Castelain who shared wins, and then the front row of the starting grid for the Final, in which gold went again, as in Mariembourg, to the Luxembourg driver Maxime Furon-Castelain. To the very end the new leader of the IAME Series Benelux resisted the attacks made by Victor Louis, who ended on right the tail of his opponent. With the disqualification of the Dutchman Youri Bonte and the 5-second penalties (poorly fixed bumpers) for Mathias Focan and Luuk Neessen, Nohlan Rairoux took the last step on the podium although he passed the chequered flag in sixth position. Focan finally closed the Top 5 ahead of Neessen and Rune Van Overwalle.

Mini: Abraham goes ahead of Ottink

Once again, the young wolves in the Mini category (7-11 years old) delighted the spectators filling the stands at Spa-Francorchamps! The proof: no fewer than 19 drivers were timed within a second during qualifying practice. Although they all deserved it, there is of course only one winner in the end. And this weekend, his name was Kimmy Abraham! Second after the two qualifying heats, the reigning champion made the most of his meagre experience to finish just one tenth of a second ahead of Douwe Dedecker (starting from pole as leader after the heats) after a great overtaking manoeuvre! With increasing power throughout the weekend, Spa resident Amaury Meertens crossed the finish line in third position. Finishing 4th after starting in 7th position, the Dutchman Nathan Ottink managed some damage limitation in his championship cause, but even so he ceded provisional leadership to Kimmy Abraham before beginning the second part of the season. We note the fine 5th place taken by Simon Lacroix, who had also posted the best time in the qualifying heats, ahead of Jordi Drees. With only 19 points difference between the first six in the provisional classification for the IAME Series Benelux, there is no doubt that things will heat up again at the next two meetings.

Like Enzo Lévêque in X30 Junior and Maxime Furon-Castelain in X30 Cadet, Sten Dorian Piirimägi confirmed his victory at Mariembourg in X30 Super Shifter (175cc karts with gearboxes). But his progress was not so smooth at Spa-Francorchamps. Winner of pole position in qualifying, the Estonian only managed second and third places in the qualifying heats while Christof Huibers made short shrift of winning both. In the final, the Dutchman continued on his triumphant way … before being docked a 5-second penalty (for a poorly secured front spoiler). This was a boon for Piirimägi who took first place directly ahead of Antwerp’s Frédéric Op de Beeck and the 2017 X30 Shifter Champion Corentin Grégoire, who was able to recover after a difficult start to the season. In 12th position at the start of this decisive round, the 2017 Champion Roy Bakker gave himself a good lift to finish 4th. Sam Claes completed the Top 5 ahead of the hapless Huibers.

X30 Master: the first of Bonnes

One thing is certain: the second event of the IAME Series Benelux 2018 will remain engraved on the memory of Justin Bonnes, winner in X30 Master (over 25 or more than 75 kilos). The Hennuyères driver in fact completed a perfect drive at Spa-Francorchamps to win maximum points (80), but more importantly he took the first win of his karting career! Although the now leader of the championship had built a small lead early in the Final, he saw the Frenchman David Chenillot overtake him four laps from the chequered flag. The Belgian finally retook the lead on the last lap, after a breathtaking duel! For his part, Hubert Bauthier won his face-to-face with the French driver Jonathan Wemaux. Second at the end of the qualifying heats, the German Sebastian Voges ended the weekend in 5th place, ahead of the returning Julien Jamoye, who posted the best time in qualifying, and the “Best Gentleman”, the French driver Olivier Sacco.
Finally, we can report some reassuring news concerning Luca Blasi. Victim of a health problem a few minutes after an incident during his second qualifying heat, the pilot had been taken by helicopter to the University Hospital of Liege for further examination. After a day and a night under observation, he was able to go home on Monday but he must now rest. The entire IAME Belgium team wishes him a speedy recovery.