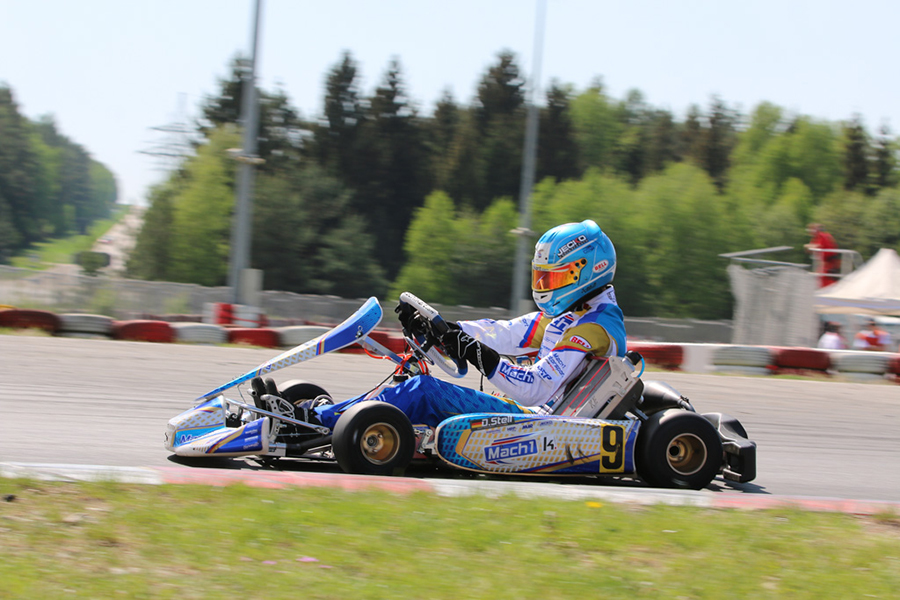 Last weekend, Mach1 Motorsport travelled to the Prokart Raceland in Wackersdorf. The ADAC Kart Masters’ ranked races three and four took place on the highly modern track in Upper Palatine and caused exciting racing action. The protégés of the German chassis manufacturer played to the gallery – David Liwinski, Julian Müller and Tim Tröger even raced towards places on the podium.

The conditions could hardly have been any better last weekend in Bavarian Wackersdorf. A cloudless sky and midsummery temperatures made for heated events on the 1.190m long track and challenged the 167 drivers and their teams. Five racers started for Mach1 Motorsport and showed great performances.

Erik Müller faced the challenges at the X30 seniors. The class had the highest number of participants: 34. The duels at the Prokart Raceland were accordingly tough. From 27th position, the youngster showed a great upwards trend after qualifying. Through the course of the heats, the Mach1 driver already gained a couple of positions, was on the 21st place on the interim rankings and ended his racing weekend on 19th place in the solid midfield of the high-class ranking list.

Tim Tröger drove among the front field of the OK seniors. During qualifying on Saturday, the Saxon already highlighted his ambitions with fifth place and tied in with this without interruption. After the heats, the young racer was on the good sixth place, but despite achieving the fastest lap time had to be content with ninth place after the first race due to a spoiler penalty. During the second ranked race, Tim gave it his all once more then. Due to impressive maneuvers, the Mach1 driver raced forward and caused a lot of joy among his team by coming in third in the end.

Team mate David Liwinski was also among the best drivers of the OK class. After the heats, the Dutchman was on fourth place and gained even more momentum during the first race. The ambitious young driver showed his ambitions to win by coming in second and highlighted the Mach1 potential. A time penalty during the second race unfortunately threw David back a couple of positions and meant eleventh place at the finish line.

Daniel Stell was the man of the hour at the shifterkarts on Saturday. During qualifying and the heats, the routine driver took the lead and didn’t give any chances to his competition. During the first final race on Sunday he had to deal with a major setback though. A falling out at the beginning of the race nullified all hopes of winning and threw Daniel back to the end of the field. From there, the Hammelsburg resident gave it his all once more and celebrated a strong comeback. Daniel raced through the field with the best times of the race and in the end achieved – despite a spoiler penalty – to end up among the top ten on ninth place.

Julian Müller also presented his best form in Wackersdorf. After good heats, the Cologne resident started from fifth place into the first race on Sunday and showed a great performance. On second place, the Mach1 protégé kept close to the leading driver and gained important championship points. During the second race, Julian tied in with this performance. After leading the field for a long time, he came in a close second in the end.

This was a really good weekend for us. Despite a little bad racing luck, especially for Daniel, we can be very content with our results. I’d really like to praise our factory supported driver Leon Hoffmann. He celebrated a race victory at the Bambini class with our material. Our hard work seems to be paying off – things can continue like this.”, team leader Martin Hetschel rejoiced in the evening.