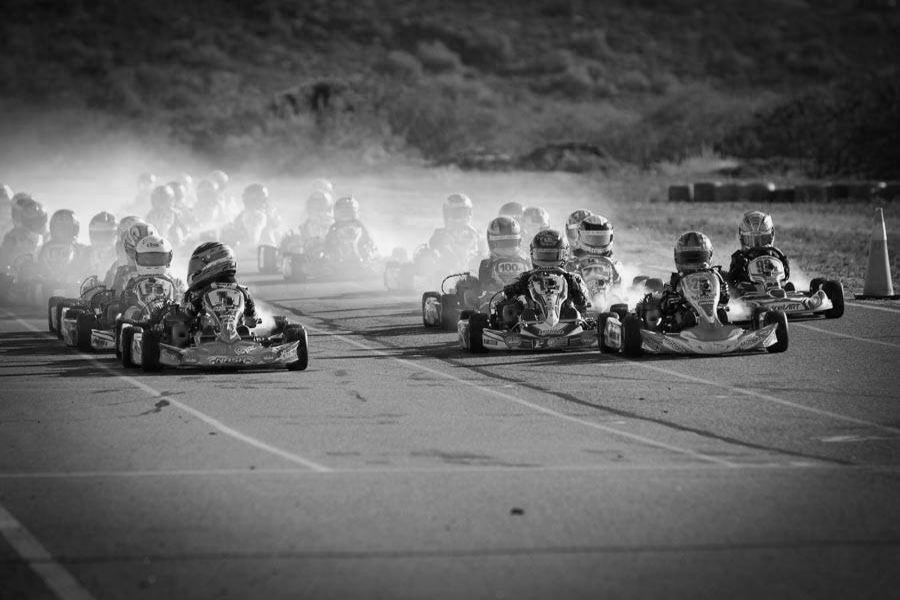 The 2018 Superkarts! USA Pro Tour resumes this weekend as the national program travels to the Phoenix Kart Racing Association facility in Glendale, Arizona. The season began with an exciting weekend at the NOLA Motorsports Park in New Orleans for the second annual WinterNationals, featuring over 200 drivers in the Honda and IAME divisions. Now, the focus is on the middle portion of the championship chase for the nine categories with Round Three and Four to be contested in the hot desert of Arizona.

The ‘Formula K Raceway’ that is the PKRA circuit is a big part of SKUSA history, hosting the first ever SKUSA ProMoto Tour event in 1999. The SKUSA Pro Tour has visited the PKRA facility three times already (2012, 2015, 2016) with this year becoming the fourth in the nine year history of the series. The 12-turn, 7/10-mile course provides a great challenge for all the categories with tight turns, esses, the long back straight and the famous ‘Daytona’ turn which serves as the opening corner for all starts.

eKartingNews.com is ready to be at the Phoenix Kart Racing Association, providing the industry-leading coverage trackside. Karting enthusiasts not in attendance can listen from home or on the road to the EKN Live broadcast at www.ekartingnews.com/live with Rob Howden providing the play-by-play call. Daily reports and updates on the EKN Social Media network will fill up your timeline throughout the weekend. Yesterday was the first preview, looking over the Stock Honda categories with today’s review of those competing in the IAME divisions.

Of course, one of the big stories heading into the weekend is the debut of the pushback bumper system on all IAME karts at the SpringNationals. SKUSA has set up the parameters for the system with the penalties based on time. Of course, this won’t become an issue until qualifying begins on Saturday, however, EKN will judge the feeling of the bumper throughout the weekend. 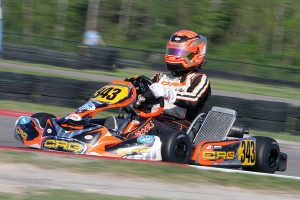 One year ago, Christian Brooks found himself leading the SKUSA Pro Tour X30 Senior championship standings following two runner-up finishes at the WinterNationals. Fast forward to the present, Brooks (CRG Nordam) is in the same position thanks to a runner-up and his first Pro Tour victory at NOLA to once again be the top driver in the title chase. The difference, Brooks is competing at the SpringNationals. His Red Bull GRC schedule did not allow for him to compete in Sonoma last year, while this year he’s gunning for SpringNats victories. Brooks has plenty of success at the PKRA circuit, which puts him as an early favorite.

Trailing by just 30 points is Praga factory driver Jorge Pescador. The Spanish driver was among the quickest throughout the weekend at the WinterNationals. Third and fourth place finishes have Pescador in the title chase, visiting the PKRA facility for the first time this weekend. The other winner on the weekend at the WinterNationals was Jake Craig (RPM / Tony Kart). The 2014 Pro Tour champion won a second straight year in NOLA, cementing his place in history for the organization. Craig is another driver with plenty of laps and success at PKRA, earning the provisional victory in 2015 in what was a controversial Final. Between he and Pescador in the standings is Canadian Samuel Lupien. The Rolison Performance Group / Kosmic driver was top-four throughout the weekend, looking to improve on that at the SpringNationals.

The top rookie from the WinterNationals was his RPG / Kosmic teammate Hannah Greenemeier. The Colorado driver charged through the field both days, earning fast lap honors in each Final, currently sitting fifth in the standings. Team FMS driver Alex Bertagnoli was a podium finisher on Sunday at the WinterNationals in his Kart Republic debut. The Illinois driver was a top-five performer in his last time at PKRA, going on to win the X30 Junior title in 2016. Success at PKRA was key to the first SKUSA Pro Tour championship for Ryan Norberg, who won at the 2016 event. Now the two-time defending champion, Norberg (PSL / Birel ART) needs to find success in Phoenix to help him climb up the standings from his 11th spot after a rough start to the title defense.

One driver to watch will be Jake Drew. The PGR / Ricciardo driver is coming off victory at the California ProKart Challenge along with three wins at Challenge of the Americas. Interesting stories to key on is Kiwi Matt Hamilton and local driver Jim McKinney. Hamilton is making a return to the Pro Tour, with the former S4 SuperNationals winner jumping into the X30 Senior category aboard an Aluminos. McKinney, fresh off earning Challenge of the Americas championship – will be arriving late Thursday after he takes his last Final of the semester at Arizona State University. 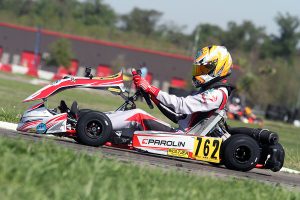 Some numbers that we at EKN crunched following the event show how ‘green’ the field is. Only 13 drivers in the field of 50 at NOLA had more than one X30 Junior start in Superkarts! USA competition. 14 of the drivers in the field were graduates from the Mini class, while 14 had zero SKUSA starts in Junior or Mini in 2017. The experience level in the field at the WinterNationals was very low, and could be a major factor into the reason for the accidents we saw. Moving forward, the drivers will need to have their heads on straight as the PKRA facility leaves no room for error. A trip off the course and you will be in line at the water hose to clean the kart.

Brazilian Matheus Morgatto enters the weekend as the championship leader. The Parolin driver scored his first Pro Tour victory at NOLA, and is coming off a big victory in Italy at the ACI Karting Championship event. Just five points separate him and Justin Arseneau (SCR / Tony Kart) in the standings. The Canadian bagged his first SKUSA Pro Tour podium on Sunday in NOLA, matched with two Prefinal wins. 2016 SuperNationals winner Tyler Gonzalez was able to repeat as a victor at the WinterNationals, however, finds himself third in the standings with an 11th place result in Saturday’s Final. All three are making what we believe is their first trip to PKRA.

Jeremy Fairbairn (MDD / Tony Kart) is among the most experienced at the top of the championship chase, sitting fourth heading into Phoenix with two top-five finishes in NOLA. Thomas Nepveau (PSL / Birel ART) and Arias Deukmedjian (LEM / Tony Kart) stood on the podium at the WinterNationals, and are within 100 points of Morgatto in the standings.

A lot of young talent reside in the X30 Junior field, but it could be experience dealing with the weather and track conditions that prevails. Oliver Calvo fits that as a two-time California ProKart Challenge champion makes his 2018 Pro Tour debut. Calvo won at the recent CPKC event in his debut aboard the Parolin with PKS. It may come down to who can handle all the grip that will be laid down throughout the weekend. 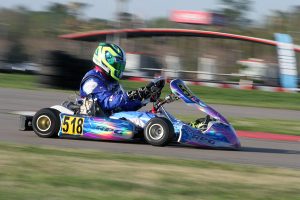 Going into the WinterNationals, we knew the X30 Master class was going to provide excitement throughout the year with the depth of talent and experience in the field. Shocking the paddock was Brazilian Paulo Lopes (RPG / Kosmic) who came out of the weekend with the championship lead thanks to his two podium finishes. Jess Peterson (PGR / Birel ART) scored his third Pro Tour victory in five starts in the category, looking to improve on that and cut into Lopes 40-point advantage. Brazilian and three-time SuperNationals winner Leonardo Nienkotter (J3 / CompKart) was the other victor at the WinterNationals, making his first visit to the PKRA facility.

Nienkotter is sixth in the standings behind defending two-time champion Derek Wang, SKUSA #3 plate holder Travis Irving, and Renato David. Wang (BBR / FA Kart) had a par weekend in NOLA, staying out of trouble to record a runner-up and fourth place, easily within striking distance heading into Phoenix for the top spot in the standings. Irving (FW / CompKart) is still winless at the Pro Tour level in the category, having pressured Nienkotter for the victory in NOLA only to have a start infraction drop him off the podium. 2016 SuperNationals winner David (Orsolon / Birel ART) was top qualifier on Saturday at NOLA, finishing fifth and sixth on the weekend. One to watch on the weekend is the return of Matt Johnson (Nash / Tony Kart) to the Master category. The veteran racer made his debut at the SuperNationals in November, and is sure to be among the quickest drivers at PKRA this weekend. 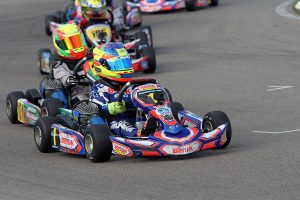 Dating back to the 2016 SuperNationals, Carson Morgan has been among the top Cadet drivers in the country. Morgan (Benik) of course clinched the 2017 SKUSA Pro Tour championship, was the provisional winner at the SuperNationals, and was vice-champion at the inaugural SKUSA Winter Series. Morgan was able to repeat as a WinterNationals winner in March, and continues to lead the standings heading to Phoenix. The gap is only 60 points back to first time Pro Tour winner Jeremy Fletcher (Tony Kart). The Florida driver has shown the speed throughout the first quarter of 2018 to be ranked among the best, needing to step up even more in Phoenix.

Anderson Leonard, Jace Park and James Egozi rounded out the podium finishers from NOLA. Leonard performed very well at the WinterNationals with two top-five finishes, however, is not scheduled to compete in Phoenix. Park has come a long way in terms of performance from a year ago. Park has developed under the watchful eye of veteran Jim Russell Jr. into one of the top Cadet drivers in 2018. Park knifed his way through the field Saturday to finish fourth, and gained his first SKUSA Pro Tour podium at the WinterNats to position himself as a title contender. Egozi (Koene / Tony Kart) placed runner-up on Saturday but was unable to match the performance Sunday, needing for two solid finishes to help his run at the title.

No one in the Mini field has more laps around the PKRA circuit as Diego LaRoque (Energy). The SKUSA #3 plate holder, who was vice champion in 2016, is making his Pro Tour 2018 debut at his home track. Parker DeLong (Benik) is another with home track advantage, as is Aden Rudolph (Birel ART) – a recent winner at the Texas ProKart Challenge – making a homecoming trip back to the PKRA facility. Others coming in off victories include USPKS winners Paul Bocuse (Energy) and Christian Miles (Formula K), along with Challenge of the Americas champion Chase Gardner (Vemme). 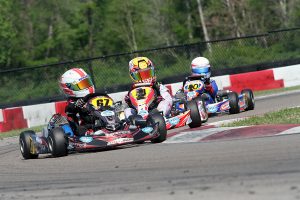 The battle in Micro Swift will continue with Maier, Gafrarar and Garcia (Photo: EKN)

The goal for the Micro Swift division is to better the finish from the WinterNationals. The top three in the Sunday final were separated by just 33 thousandths of a second at the line, which includes the top-three in the standings. Ben Maier (Nitro Kart) was able to secure the victory in the photo finish over Max Garcia (Benik) and Caleb Gafrarar (Parolin). Gafrarar scored the victory on Saturday, and has him in a tie at the top of the standings with Maier. Garcia is back by only 20 points, putting the three well out in front of the rest of the pack heading into the weekend. Ethan Ayars (Parolin) was the only other podium finisher on the weekend, sitting fourth in the standings. Gage Jarvis (Benik), the Challenge of the Americas champion, is making his SKUSA Pro Tour debut on the weekend at his home track, looking to mix it up with some of the best Micro drivers from around North America.