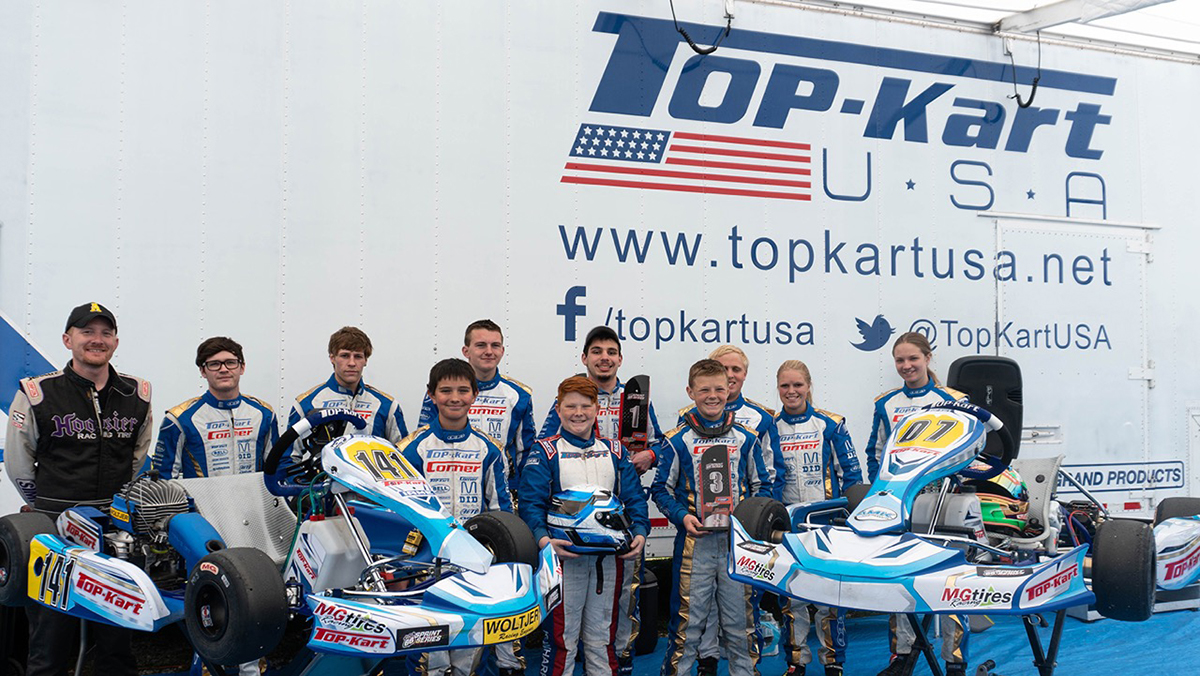 “After ending an extremely successful first round of the Route 66 Sprint Series, Top Kart USA is very pleased at the results that all of the Top Kart drivers in the paddock have achieved,” explained Top Kart USA’s Blake Deister. “There were some hard fought and very close racing and we are proud of everyone’s hard work and effort to help achieve these results as a whole team! Also, with our partner AMK Race Products and team by our side to take on a huge amount of customer support, we can’t thank them enough for all of their success and efforts throughout the race weekend!”

Alex Kardashian proved his speed as he walked away from the weekend with plenty of hardware. Claiming the race victories in in Saturday’s X30 Senior main event as well as both the Yamaha Senior finals, the Top Kart driver also added two pole positions and a third place podium result to his resume as he led the charge in New Castle.

Junior competitor Kaden Wharff would also put the blue brand on top this past weekend as he topped the blocks in Yamaha Junior on Saturday before garnering a fourth place finish in Sunday’s main event. Pulling double duty, Wharff added a fourth place finish in one main event before a flat tire in Sunday’s would relegate him down to the 11th position in the X30 Junior class after he claimed Sunday’s pole position with a terrific lap in morning qualifying.

Bill McLaughlin Jr. returned to action after nearly two years out of the seat as he competed in the KA100 Senior class. Getting up to speed early, McLaughlin challenged at the pointy end of the field before securing a sixth place result Saturday and a fourth place effort Sunday en route to setting the fastest lap of the race.

“It was a great experience to make a returning debut after close to two years retirement,” explained Bill McLaughlin Jr. “The KA100 engine is an overall great package, and quite easy to work with, and a very good compliment to the Twister chassis. The combo works well with minimal tuning and I was able to earn the quick lap and a very close P4 finish contending for the win across the line. Sometimes luck just has its way and it wasn’t for me that race.”

Adam Maxwell added another podium result to the growing list at Top Kart USA as he improved from his sixth place finish during Saturday’s Yamaha Cadet event to finish an impressive third on Sunday. Olivia Rieding continued to gain experience in the X30 Senior category as she battled a strong field of drivers. At the end of the weekend, 14th and 17th place finishes were added to her results chart as she represented the Top Kart brand all while gaining on track experience.

According to Chris Kardashian, AMK Race Products co-owner and dealer for Top Kart USA, “We are thrilled with the effort and success of our drivers during this weekend’s inaugural Route 66 event at New Castle Motorsports Park. Our drivers claimed four of the top-ten finishing positions in Saturday’s Yamaha Senior Final: Alexander Kardashian (P1), Arie Venberg (P5 and FIRST Podium in Senior Class), Carter Pease (P6), and Jake Venberg (P7). In Sunday’s Yamaha Senior Final, the results were spectacular with AMK Race Products taking control with four of the five podium positions: Alexander Kardashian (P1), Carter Pease (P2), Jake Venberg (P4), and Arie Venberg (P5). In IAME X30 Senior, Alexander won both the Pre-Final and Final on Saturday and raced to a six second margin of victory in the Final. In Sunday’s X30 Senior activity, Alexander put his number 55 AMK Race Products Top Kart on pole, won the Pre-Final, and finished third in the main event.”

“New to Route 66 and New Castle Motorsports Park, Kiara Stai had an experience of a lifetime racing in Yamaha Junior. With each session, she gained confidence and speed and went wheel to wheel with some of the fastest racers in the class. I think there will be more regional racing in her future. Longtime AMK Race Products Yamaha Senior driver, Nate Dean, experienced a few setbacks over the weekend with a DNF on Saturday and a hard fought drive on Sunday to finish just outside of the top-ten with an eleventh place finish.”