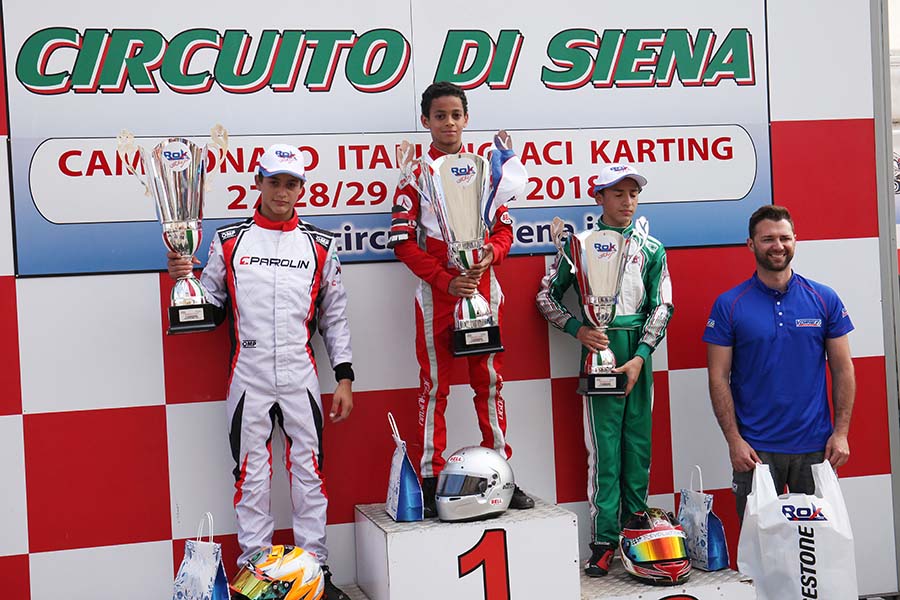 The Circuit of Siena has staged the first of the eight rounds of the Italian ACI Karting 2018 Championship with a good presence especially in 60 Mini, that had 80 drivers at the start, but also in Rok Trophy with its Junior and Senior grades. On track in the opener of the season with the new format, OK-Junior as the Easykart, Rotax, and single make Naskart made their debut. In the next round to be held in La Conca on May 27th, KZ2, KZ3 and the Iame X30 Trophy will get on track alongside Rotax and Naskart.

60 Mini, after several hard-fought qualifying heats, completed its opener withsingle-makey of Race-1 going to the Pole Karol Pasiewicz (Energy-Tm), who fought a good duel with the Norwegian Martinius Stenshorme (Parolin-Tm), while the third step of the podium went to Andrea Kimi Antonelli (Energy-Tm). Race-2 was won by Stenshorme from Brando Badoer (Parolin-Tm), who came sixth in the first race. The third place went to the British racer Coskun Irfano, also on Parolin-Tm.

Tommaso Chiappini (Formula K-Tm) got the full haul in OK-Junior winning Race-1 and Race-2. Chaippini led Mattia Ingolfo (KR-Iame) and Leonardo Fornaroli (KR-Iame) in the first final, while in the second Chiappini inherited the win after Ingolfo was handed a time penalty. Behind Chappini, Lorenzo Patrese – the son of Riccardo Patrese, is second in the classification, while Ingolfo is third.

In the single make Trophies run during this round, the Rok Trophy had good grids both in the Junior and Senior. In Junior, the first final was won by Matheus Morgato Alvarenga (Parolin-Vortex), from Federico Cecchi to Raffaele Gulizia, both on Tony Kart-Vortex. The second Final was won by the American Ugo Ugochukwu (Tony Kart-Vortex), who got on the top step of the podium thanks also to a penalty handed to Cecchi, who had crossed the finish line on top. The podium was rounded off by Morgato and Gulizia.

Pietro Delli Guanti (Exprit-Vortex) claimed a good win in the first final of Senior Rok. He led the Pole Maciej Szyszko (Kosmic-Vortex) and Cristian Comanducci (Tony Kart-Vortex), as the latter inherited the third step of the podium due to a penalty given to the other Polish driver Kacper Szczurek (Kosmic-Vortex). The second final was won by Maciej Szyszko, who proceeded his brother Szymon, as Anderson Sella (Tony Kart-Vortex) came third thanks to another penalty given to Szczurek who was pushed down from P2 to P9.

In the Easykart Trophy, both finals were won by Francesco Serafini. Alfonso D’Eugenio and Rosolino Caralla followed him, all on Birel-Bmb.

The victory in the Rotax Trophy went to Davide Vuano (Praga-Rotax) of Senior, who claimed both wins. The Rotax Junior victories went to Vincenzo Scarpetta (Parolin-Tm) and Emma Segantini (Intrepid-Tm).

The Naskart Trophy is characterized by Righetti Ridolfi chassis and Modena Engines shifter engines. In this category, both finals went to Moreno Di Silvestre. Lapo Nencetti had actually crossed the finish line of Race-1 as the first but was later on handed a 10s time penalty due to jump start and therefore he was relegated to P3, also behind Alessandro Brigatti who ended on the podium of Race-1 in second. Lapo Nencetti jumped again the start in Race-2 and lost the victory that went again to Di Silvestre, while Alessio Bacci was second and Christan Arfè third. Nencetti was fifth.

The next round of the championship will take place on May 25-27 at the International Circuit La Conca, Muro Leccese (Lecce), with KZ2, KZ3, Iame X30, Rotax and Naskart on track.