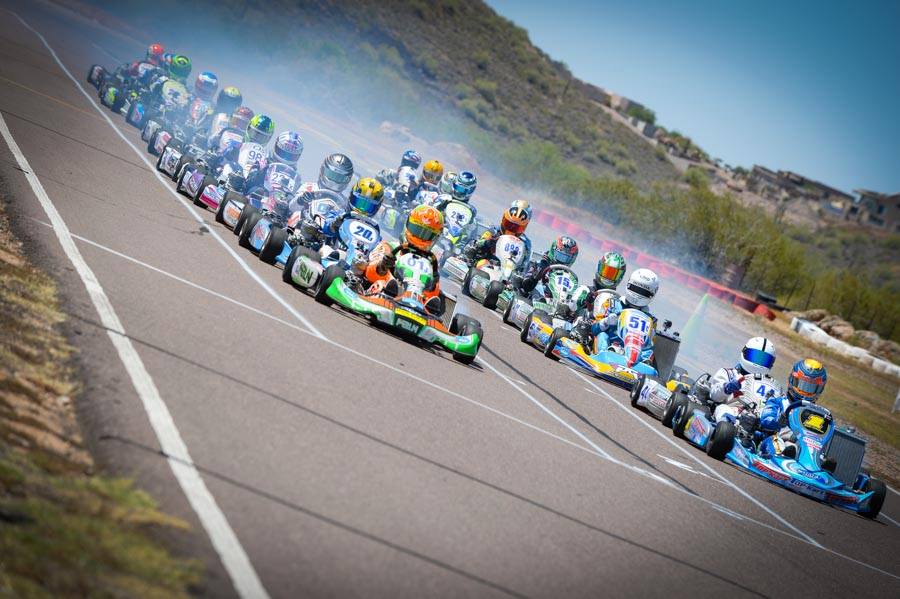 For the fourth time in Superkarts! USA history, the SKUSA Pro Tour is set to travel to the Phoenix Kart Racing Association facility. The ‘Formula K Raceway’ in Glendale, Arizona is set to host the organization on May 4-6 for the second event of the 2018 season – the SKUSA Pro Tour SpringNationals. The six-round championship program that is the 2018 SKUSA Pro Tour began at the NOLA Motorsports Park in Avondale, Louisiana in March at the WinterNationals. Over 200 drivers took part in the 2018 opening event, with similar numbers expected for Arizona. The middle two rounds of the series are set for the PKRA facility, where the organization has visited three times in the previous eight years of the SKUSA Pro Tour (2012, 2015, and 2016).

Three drivers are at the top of the S1 Pro Stock Honda division after the first two rounds. AJ Myers won Round Two, and enters the SpringNationals as the championship leader over defending SuperNationals winner Billy Musgrave and Round One victor Austin Garrison. The top three in the X30 Senior division is a mix of nations. USA’s Christian Brooks holds the top spot thanks to his first SKUSA Pro Tour victory at the WinterNationals. Spanish driver Jorge Pescador was fast all weekend in NOLA, and sits second in the standings ahead of Canadian Samuel Lupien.

Brazilian Pedro Lopes swept the main events in the S2 Semi-Pro Stock Honda at NOLA to begin 2018 as the point leader. Veteran karter Cameron Egger sits second ahead of Texan Blair Hosie. Pedro’s brother Paulo is the point leader in the X30 Master division thanks to his two podium results at the WinterNationals. Round One winner Jess Peterson sits second with two-time defending champion Derek Wang in third.

Three former SKUSA Pro Tour champions are at the top in the S4 Master Stock Honda standings. Ryan Kinnear improved on his WinterNationals from a year ago to earn his first victory at the event, putting the Texan as the championship leader. Defending champion Jordon Musser suffered mechanical issues on Saturday and went winless on the weekend, slotting into the second spot in the standings ahead of Round One winner Jimmy McNeil. For the first time since the S4 Super Master Stock Honda division was introduced into the SKUSA Pro Tour, a new name is at the top of the standings. John Crow secured his first victory in the category and left NOLA as the championship leader. 2017 SuperNationals winner Mike Jones added another victory to his racing resume, as two-time defending champion Robert Marks went winless on the weekend and not in the #1 spot of the point standings for the first time in two years.

Mathias Morgatto secured his first SKUSA Pro Tour victory at the WinterNationals and leads the championship chase in the X30 Junior division. Canadian Justin Arseneau is not far off, back by only five points with Round Two victor Tyler Gonzalez beginning his second season in the category strong. Defending Mini Swift champion Carson Morgan is starting the 2018 chase in the same position. Victory in Round Two and podium in the opener has the Californian leading the point standings. Jeremy Fletcher won his first SKUSA Pro Tour main event during Round One, and holds the second spot ahead of fellow Floridian Anderson Leonard. Two drivers are locked at the top of the Micro Swift standings heading into Phoenix. Caleb Gafrarar and Ben Maier each won at the WinterNationals, earning exact amount of points over the weekend with series rookie Max Garcia earning two runner-up results on the weekend to sit third.

Registration remains open until Sunday, April 29 at midnight at the SKUSA MotorsportsReg page. Pit spots are filling up fast. The first three rows are completely full and SKUSA is recommending anyone without a spot to complete the process mapped out HERE as soon as possible. The deadline for team tires and Honda SK-1 pipes is Thursday, April 26 at 5pm PDT through the new dealer portal. More information regarding host hotel, rule updates and event schedule are available through the SKUSA Pro Tour Calendar page. SKUSA is set to celebrate Cinco de Mayo during Friday night’s dinner, sponsored by Ruthless Karting. Complimentary tacos and drinks will be available following on-track action.

Superkarts! USA would like to recognize the nine companies supporting the SKUSA Pro Tour SpringNationals with class sponsorship on the weekend;