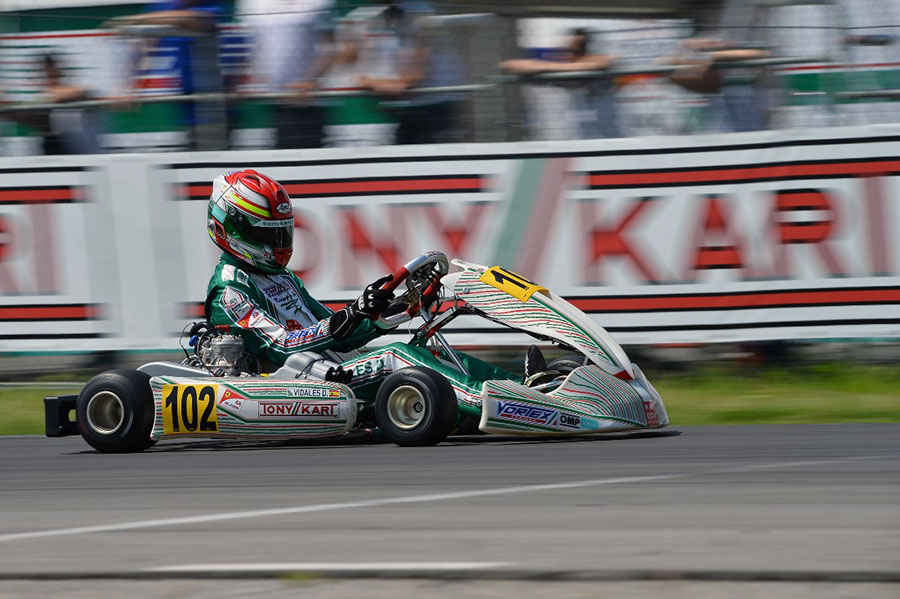 At the International Naples circuit of Sarno, the Tony Kart Racing Team’s drivers cannot take advantage of their good performance in the final.

The Kart Grand Prix Italy, the first round (out of four) of the FIA Karting European Championship – OK / Junior, on the International Naples circuit of Sarno, contrary to what the track performances might have been suggested, did not end with a significant result for our Racing Team.

In the Senior class, David Vidalesand Noah Milellstart the weekend on the right foot, gaining one success each and never going beyond the 3rdand 4thplace, respectively, in the five heats disputed.

Such results, these, which allow them to jump from the second and fourth row in the final. For Vidales the race did not last long: after having struggled for the leading positions in the early stages of the race, he was forced to stop due to technical problems. Milell, on the other hand, after a difficult start, ran from the back positions. From then, he started an incredible comeback, with over takings and fast laps (it’s his, in fact, the best lap of the final, 57.729). Unfortunately, he cannot go beyond the 14th place on the finish line, then relegated to 21st position, due to the penalty of 10″ for the front fairing detached.

In the OKJ category, Josep Maria Martìafter a 21stplace in the qualifyings, in the eliminatory heats he performs perfectly and manages to always finish in the top 10. In the final he runs from the 12thplace and goes up to the 5th. Finally, he also gets a penalty of 10″ due to his spoiler in incorrect position.

Like his teammates, even Laurens Van Hoepentries to make the most of the potential of his own Tony Kart 401S Racer powered by Vortex engine. The 7th chrono on 78 drivers, immediately suggests a decidedly positive weekend which ends, however, with a 21st place in one of the heats. Result that, despite 3 third places and a seventh in the eliminatory heats, forces him to shoot from the 14th place in the final. After the start, a few collisions in the middle group and a penalty of 10″ will relegate him in a disappointing 19th position.

Sebastian Montoya, on the other hand, starts with an uninspiring 36thplace in the qualifyings. In the heats, he is good in 3 out of 5 races, to enter in the top 6 list. In the final, however, he has to withdraw, which thing prevents him to complete his comeback towards the top positions.