Veteran driver offers his views on a quality pass 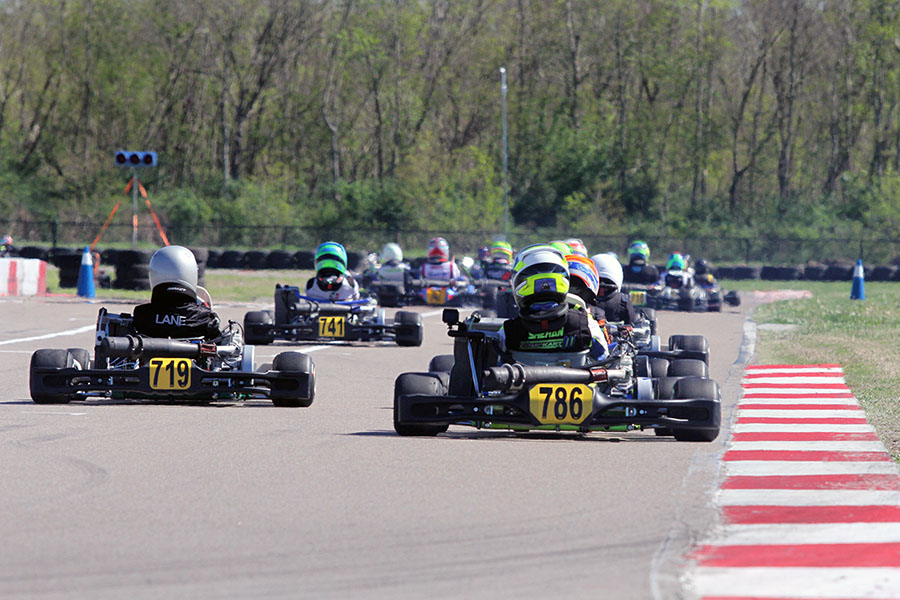 The hottest topic of discussion in the sport right now is centered on a negative culture shift in driving standards, most predominantly seen in national level competition. Over the next few months, EKN will be presenting an article series that features the thoughts and beliefs of some of the most respected drivers and industry veterans in the sport. It is our hope that drivers, tuners, coaches and parents will all take the time to read these submissions, and discuss their merits, so that we can reverse the slow decay of racecraft that we’re seeing in our incredible sport.

With that, we present our series called ‘The Art of Racecraft’. The next veteran of the sport to pen his thoughts on the subject is Jim Russell Jr.  The Russell family have been patriarchs of the sport for many decades, and the second-generation driver has been behind the wheel of nearly every type of kart in every form of karting across North America and around the world. For reference, check out the columns from TJ Koyen and Jamie Sieracki that followed the Morning Coffee intro from Rob Howden. 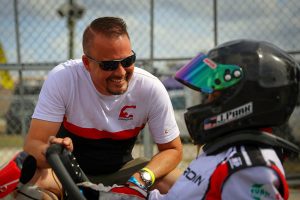 My pace is higher than the competitor in front of me. We approach the corner and I pull to the inside of the faster racing line. I brake late to get alongside and I have the inside track. I work to get the kart slowed and turned, so that I can apex and make a smooth exit, gaining the position on the track. What has just transpired is a well-executed pass. A pass is only one part of the skill set of a driver. This skill set, when executed, is called ‘racecraft’.

‘Racecraft’ is a concept that encompasses all the skills a driver uses while competing in an effort to maximize their performance. Passing, braking, cornering, drafting, carburetion tuning, chassis tuning, and tire management are some of the tools in the racecraft tool box.  I would like to expand upon the execution of a clean pass, one where the position is gained without contact with the other competitor’s kart.

For some, the ‘pass’ might start when you pull to the inside of your competitor, but for me, it starts way before then. You can ‘research’ your competitor in earlier sessions, earlier laps of the race or even during previous events. Do they have a certain driving style that has opportunities to exploit? Is their chassis or gearing set up differently than yours, allowing for areas of vulnerability? Has their tire management created advantages for you in later stages of the race? Looking for these areas, you can attack when you are strong and they are weaker, so it helps to identify areas that give better chances for passing. 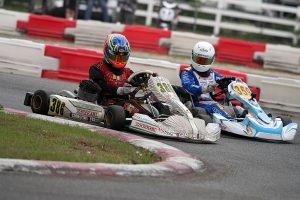 “A pass is only one part of the skill set of a driver” (Photo: EKN)

Some tracks and categories set up for draft passes, so have you left yourself enough room to be quicker through the preceding corner or corners so that you come onto the straight with a speed advantage that you can then increase with the closure in the draft to give a big advantage into the braking zone?

Once you have found your area of attack, maximize your chances of a successful pass by looking for items that can hinder you. Is there room to pass into? If you are the third kart in a line and there is 1” of clearance between the driver first in line, where are you going to go without contacting the first driver in an attempt to overtake the second? Remember, we are trying to make a pass without contact with anyone.

Do you have the ability to get the kart stopped and turned while off the normal racing line? Typically, the grip level is lower in both the braking zone and turn-in when you’re off-line. It is no good to drive up the inside and then overshoot the corner, allowing an easy over/under move. This also leaves you open to immediate attack from a driver behind you, as they will have a good run on the normal line and this will give them a higher probability of a successful pass into the ensuing corners. I prefer to use what I call the ‘block pass’. This is one where you pull alongside and do not attempt to put your kart in front of your competitor’s, but only next to them. One in which there are no opportunities for the competitor to turn without contacting you and causing themselves a high chance of contact, which would likely lead to multiple position loss or not finishing the race. Are you able to get your chassis to turn so that, as you force the competitor to run wide of the normal line, you yourself do not have to exceed the normal line? The normal racing line should be your maximum line and you should strive to be under that on entry to the corner to the apex. 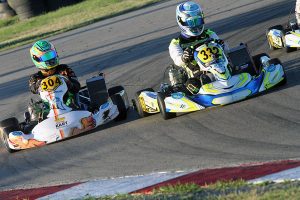 Are you able to get your chassis to turn so that, as you force the competitor to run wide of the normal line, you yourself do not have to exceed the normal line? (Photo: EKN)

Once you have decided where to execute your pass, how likely is it to leave you vulnerable to being passed back or will it slow down your overall lap speed where you lose touch with the other competitors in front of you? The corner leading to the longest, fastest straight might be an easy pass opportunity, but it leaves you a huge disadvantage overall in the race. A series of corners changing directions is a great place to pass into as it can help neutralize anyone behind you, as they will be limited to the lower speed that you finish the pass with.

What happens when you miscalculate your pass? You went for the pass and the other driver had the pace to stay outside you past the apex. This is when you gain the respect of your fellow competitors. It is so easy to drive to the edge of the track and force them off, gaining the position. It is much more difficult to let them have racing room of the width of their kart plus 1” while you do your best to outrun them to the next corner. The drivers who do this will be respected as ones who can race you hard to every apex for any position, but also cleanly, as you do not take the easy route of contact for position.

Perhaps you have made an even bigger error in judgment and knocked someone back in your pass attempt. Are you a respectable enough to let that driver back in front of you? Give up the position you have gained through contact? I have done this and it is more embarrassing for me that I have put myself into the position.

I strive to make clean passes every time. I want to gain the respect and trust of my fellow competitors. How about you? What kind of “racecraft” will you use in your next event?

One thought on “The Art of Racecraft: Jim Russell Jr.”