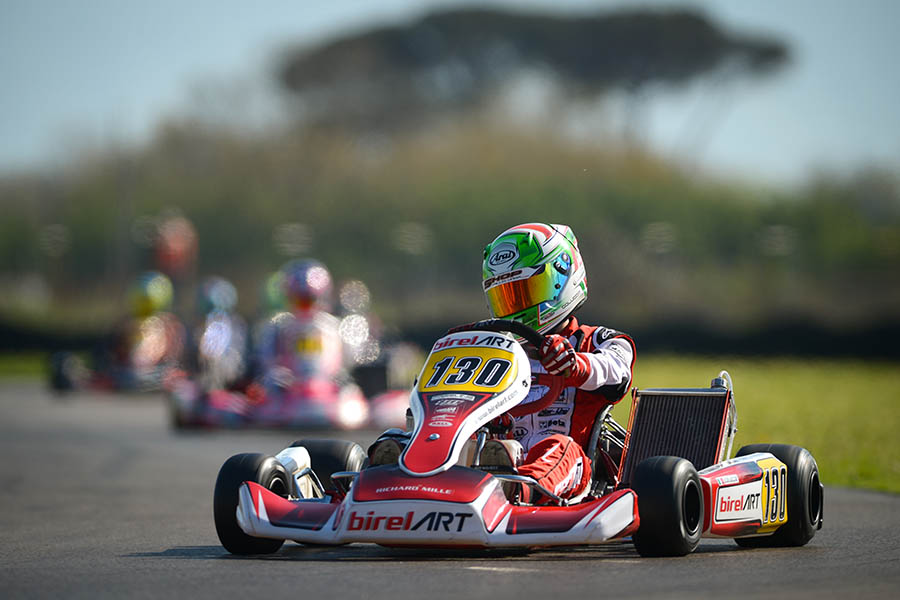 During the first round of the CIK-FIA Karting European Championship, the Birel ART Racing team was eager to show that the work done during the races at the beginning of the season had paid off. With Luigi Coluccio and Marijn Kremers in OK, as well as with Lorenzo Ressico D’Aloisio and Thomas Ten Brinke in OK-Junior, the Birel ART-TM karts enabled the young drivers of the team to reveal excellent potential during the Finals. At Sarno, the gains they made certainly deserved a bigger points haul.

With the performance of the new Birel ART chassis homologated in 2018, the partnership with TM Racing and its engine builders, the arrival of team manager Davide Forè at the start of the season and the incredible experience of the technical staff, the Birel ART Racing team has all the ingredients to bring its drivers to the highest level. “I want to salute the work of everyone, drivers and technicians,” commented Davide Forè. “We were expecting a difficult and competitive European Championship opener, and that really was the case. The gaps between the top drivers are tiny. From the very beginning, we were very happy to see Luigi Coluccio successively 2nd and 4th. It’s a shame that he retired from a heat on Saturday afternoon, as it pushed him back to 23rd place on the starting grid of the Final. As a result, he suffered jostling within the pack and was penalised by 10 seconds after the race for an unhooked spoiler. He had taken the finish in 7th place after a remarkable comeback, but was recorded in 16th place.”

Also very fast, his team-mate Marijn Kremers was preparing to enter the top 10 but suddenly had to retire with much regret, while he was faster than several drivers in the leading group at this period of the Final!

At the Kart Grand Prix of Italy, the German Valentino Fritsch, the Lithuanian Gustas Grinbergas, the Czech Matej Kacovsky, the Italian Francesca Raffaele and the Greek Georgis Markogiannis learned a lot in difficult conditions, with the return of the heat in the Naples area.

“We must recognise that the OK-Junior category was not favourable to us,” continued Davide Forè. “On the one hand, we had to deal with Francesco Raffaele Pizzi’s physical problems. He was on an excellent trajectory after the WSK races, but had to withdraw before the end of the meeting. On the other hand, we had to redouble our efforts to adapt to the type of tyres, which was different from those we used in previous races. Despite this, the Italian Lorenzo Ressico D’Aloisio and the Dutchman Thomas Ten Brinke gave us a lot of satisfaction by winning their place among the 34 finalists, despite a field of 78 strong drivers.”

Ranked 31st and 33rd, Ressico D’Aloisio (Birel ART Junior Team) and Ten Brinke were respectively 17th and 24th in the Final. For his part, the Canadian Thomas Nepveu knows he has the opportunity to quickly improve on the result at Sarno. His recovery of 13 places in a heat, to which was added a lap time faster than the leading men, allowed him to demonstrate that he will be one to watch this season.

“Our next goal is clearly to reach the podium in France, at Salbris, at the opening of the KZ and KZ2 European Championships. I would like to congratulate and thank all the other drivers and teams who use our Birel ART chassis during the European Championships,” concluded the Italian team manager.