CRG: Good Race for Hiltbrand at the European Championship in Sarno 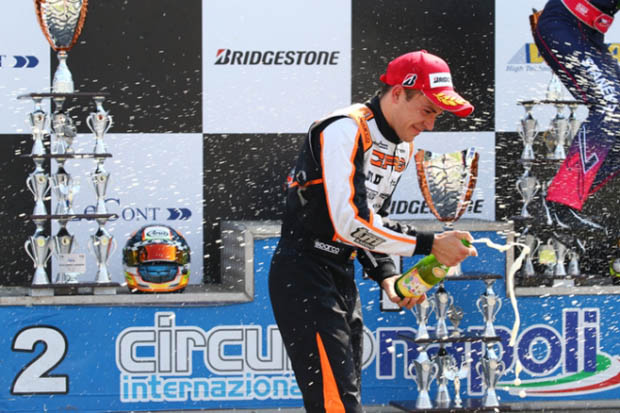 The opener of the CIK-FIA European Championship in Sarno welcomed the first podium of the season for Pedro Hiltbrand in OK.

CRG eventually obtained a great result with Pedro Hiltbrand in the opener of the European OK and OK-Junior Championship at the Kart Grand Prix in Sarno. The CRG driver secured in fact a second place at the end of a very positive weekend always lived among the protagonists.

HILTBRAND ON THE OK PODIUM. The Spanish driver of CRG, who already has the 2016 European and World Championships under his belt, has been among the quickest in this opening race of the International CIK-FIA season. Thanks also to the competitiveness of the new CRG Heron chassis powered by TM Racing, Pedro Hiltbrand confirmed to be once again on top of OK in Sarno.

“Maybe, I could have won – Pedro Hiltbrand stated right after the chequered flag – but after leading the race at the start, Stanek managed to build a good gap while I was stuck in some battles in the first two laps. At a certain point it looked like I could close in onto the leader, but if I gained some ground in a sector, he was getting it back in another. I got some ground back in the end, but it was not enough to attempt an attack. This was the first round of the European Championship and to us it was important to start on the right foot and score as many points as possible. I am happy for this second place. I would like to thank CRG and TM for providing me with this great material.”

Among the best CRG drivers in OK, the British driver Callum Bradshaw put in a very good race and was eighth at the flag, as did Andrea Rosso, who ended 13th after some troubled heats and a stunning 10 place recovery. The Spanish Ayrton Fontecha was 18th, while, despite a win in the closing heat, the Brazilian Olin Vieira Galli and the Argentine Franco Colapinto did not qualify for the Final mainly due to some incidents.

BORTOLETO SLOWED DOWN IN OK-JUNIOR. Some technical issues limited the chances of the Brazilian Gabriel Bortoleto in OK-Junior. Bortoleto has been among the best in qualfiying and in the heats, but in the Final he had to settle for P14 losing the chance to fight among the leading pack. The American Tyler Maxson closed his maiden race in the European Championship in 21st place. Adam Putera had to retire due to an incident after being among the quickest, as happened to Alfio Andrea Spina. Saood Variawa was 25th instead due to a penalty. Leonardo Bertini Colla could not qualify for the final due to two incidents, the Chinese Xizheng Huang had a similar fate as he could not start the closing heat due to a problem at the spark plug, Enzo Trulli, Paolo Gallo and the other American Elio Giovane Gonzalez did not qualify for the Final either.