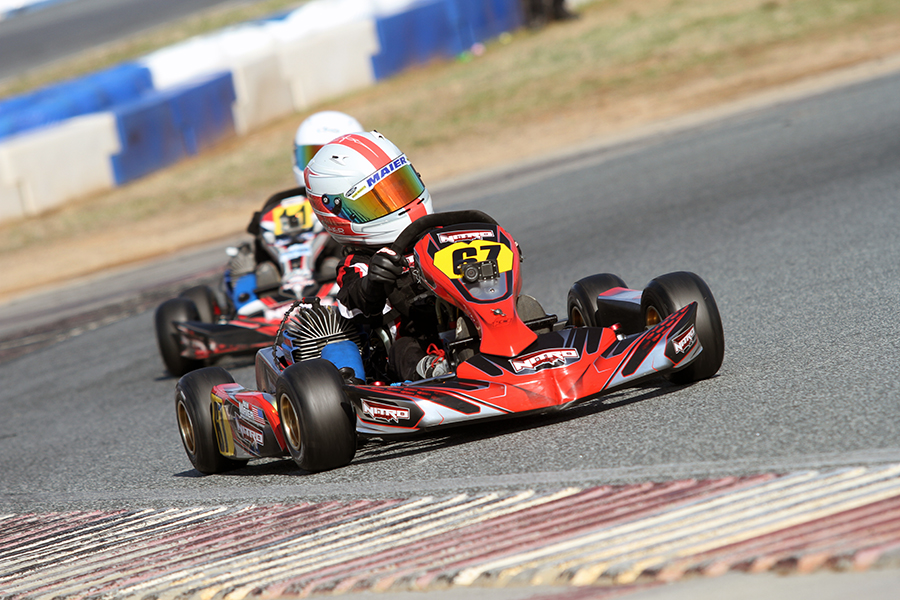 The month of March was a busy one in the sport of karting. The Superkarts! USA began its 2018 SKUSA Pro Tour and the World Karting Association Manufacturers Cup Series resumed its season. A number of drivers contested both events, such as Nitro Kart driver Ben Maier. The nine-year-old is competing in his second season in the Micro division, making it one to remember. 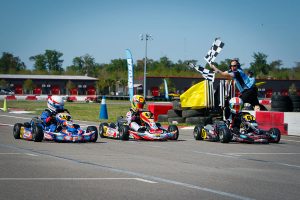 Maier edged out Gafrarar and Garcia for victory at the SKUSA WinterNationals (Photo: On Track Promotions – otp.ca)

Maier started out the season as the SKUSA Winter Series champion, winning one race at each of the two events. That led into the SKUSA Pro Tour WinterNationals at the NOLA Motorsports Park in Louisiana. Maier entered as one of the favorites for the weekend and to contend for the series championship. The opening day was not as hoped, qualifying within the top-six and showing speed throughout the day, unable to break into the top-three.

Sunday proved to be much different. Ben was the only driver to hit the 1:09 mark in qualifying to secure the pole position for the main event. Maier held on to score the race win in the Prefinal, setting up for an epic battle in the main event. Caleb Gafrarar and Max Garcia joined the Nitro Kart driver at the front. The race went to the final corner, as the trio went three wide to the line with Maier coming away with the victory by just 0.018 seconds over Garcia with Gafrarar only 33 thousandths back in third. The finish is one of the closets in SKUSA history. The day was perfect, scoring maximum points in the championship.

A few weeks later, Maier traveled to the GoPro Motorplex facility in Mooresville, North Carolina for the WKA Manufacturers Cup Series. The second event of 2018 served as Round Three and Four, with Maier coming off a double win performance at the opening event in Daytona KartWeek. Ben began the first round of the weekend with fast time in qualifying, however, found himself in fourth during the opening heat race. A penalty for contact took the win in Heat #2 away, putting Maier on the outside of row one for the Final. In wet conditions, Maier was able to led the entire 13 laps to score a third straight victory in the series. 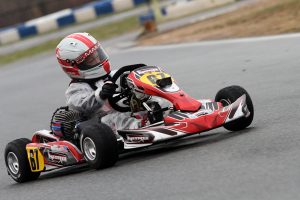 Both in the wet and the dry, Maier was best in both finals at the WKA event at GoPro Motorplex (Photo: EKN)

Ben went from the back to the front on Sunday. Maier gambled in qualifying as the track was attempting to dry out, however, not enough for his category. Maier went off course and was classified 12th after the timed session. The track had dried by the time the Prefinal began, with Maier fighting his way up to seventh in 10 laps, recording the fast lap of the race. It took just five laps for Ben to take over the lead in the Final, and from there, drive away to an 11-second advantage for his fourth straight victory in the series, third in the month of March.

The month of May will be another busy one for Ben and the sport of karting as he looks to continue his win streak. Maier finds himself second in the SKUSA Pro Tour standings, tied with Caleb Gafrarar for the top spot. Each have a victory and look to continue their battle at the SpringNationals, set for May 4-6 at the Phoenix Kart Racing Association facility in Glendale, Arizona. Ben and Gafrarar each took a win at the USPKS event in April at Ocala. Maier holds a 130-point advantage in the WKA Manufacturers Cup Series standings with the third stop scheduled for two weeks after the SpringNats, set for the Pittsburgh International Race Complex in Wampum, Pennsylvania. 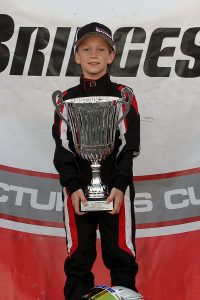 Chassis: Nitro Kart
Engine/Engine Builder: Swift, ROK, Rotax, Briggs, CR80 / Allison Racing
Sponsors: Nitro Kart, Fast Kart Supply, Allison Racing Engines, BOE Marine & RV, Donnie Myers Luxury Coach, Bolted Spine Designs
Series You Compete In: WKA Man. Cup, USPKS, SKUSA Winter Tour, SKUSA Pro Tour, Rotax Grand Nationals
Years Karting: 5
How did you get started in karting? My dad brought me to Nicholson Speedway and the racing looked awesome so he bought me a kid kart.
What has been the high point in your racing career? Right now, I’ve won 8 of the last 12 national races.
What are your goals in racing? To win SuperNats
In a few words, how would you describe your driving style? Wicked good
Funniest moment at the track: When I pantsed Adam at GoPro

What do you do when not at the track? RC cars, baseball, soccer, boating, read, ride bike, mad libs, go to school, swim
What are your goals outside of karting? finish 3rd grade, get a new lizard by being a good kid
What app or game do you play a lot of right now? Fortnight, Rocket League
What type of street car would you like to drive? Koenigsegg
What are your pet peeves or things that irritate you? When I get in fights with my brother
What do you think could be done to improve the sport of karting? Pit stops, pit stops would be fun, and there should be ice cream during the pit stops
What are your favorite aspects about the sport of karting? Going 65 MPH.  Learning racecraft.