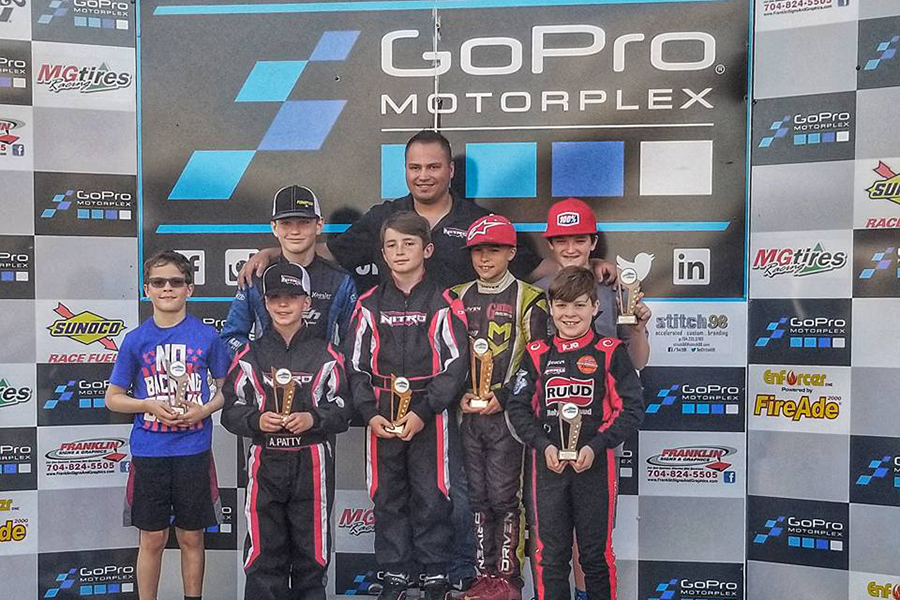 Round 3 of the 12-Round Karting Challenge club series at GoPro Motorplex saw a strong entry of 141 drivers and Team Nitro Kart again fielded a full contingent of challengers. This round featured a different formant, with the grid for Heat 1 set by random draw instead of a qualifying session and the Heat 2 grid set by an invert of the Heat 1 grid. The grid for the Final was set by combined points from both heat races, and the different format produced a lot of exciting racing, for obvious reasons!

Nitro Kart’s left-side engined Briggs Cadet chassis works very well around GoPro Motorplex and has become a very popular chassis in the class. Team Nitro Kart’s Adam Brickley won Heat 2 and was on the pole for the Final and held the early lead before getting into a torrid battle with Danny Dyszelski and Sam Corry.  At the checkered flag, Brickley crossed the line 3rd, with just 3-tenths of a second covering the top-3 karts, with Team Nitro Kart’s Spencer Conrad a few seconds behind in 4th place. Nitro Kart pilots James Overbeck and George Wheeler placed 6th and 9th respectively. Team Nitro Kart’s Christopher McKeithan fortunately escaped with just bruises after a scary crash which saw his kart flip after contact with another competitor in the Final. He had a very good run going and was on pace for a top-5 finish at the time of the incident and will surely come back strong.

The IAME Mini Swift division was dominated by Nitro Kart with the black karts filling 5 of the 7 entries. The Mini Swift Final was definitely the race of the day and three of Team Nitro Kart’s newest drivers, Gavan Boschele, Ayden Patty, and Spencer Conrad, who are short in stature, but long on talent, were the stars of the race. Boschele, who cut his teeth in quarter midget racing and was in his 5th ever kart race, led the final early but swapped the lead with Conrad several times. On the last lap, Patty, who was running 3rd, had a great run on the outside going into Turn 4, and he emerged from the three-wide battle with the lead. Boschele took the lead back exiting the hairpin Turn 8 and held on to take the win, with Patty 2nd and Conrad 3rd. All in all, there were probably 30 passes between the three Nitro Kart pilots without one touch of wheels; an outstanding display of racecraft and maturity from these young racers. Unfortunately, Nitro Kart racers Jordan Sherwood and Mason Cantrell were caught up in a wreck at the start of the Mini Swift Final and both were DNF’s.

Team Nitro Kart also filled much of the IAME Swift grid, with 8 of the 14 drivers on the Nitro Kart chassis, and the racing was fast and close as usual. Brent Crews again led the way for Team Nitro Kart and finished 2nd in Heat 1 and 3rd in Heat 2. In the Final, Crews overtook Raiden Nicol early to lead the way, but lost the lead briefly back to Nicol around halfway before taking back the point the next lap. Crews then led a 3-kart freight train with Nicol and Sam Corry in tow until Corry used an over-under move in Turn 8 on the last lap to take the lead and the win. Brent came home 2nd with Nicol taking 3rd. Fellow Nitro Kart pilots had their own fights throughout the field, with Adam Brickley placing 7th, James Overbeck with a strong drive to 8th from deep in the field, Sofia D’Arrigo in 9th, Jackson Bonner 10th, Alex Delemo III 11th, after contact with another driver on the last lap, and Jack O’Brien in 13th. Liam Kelly ran the heat races but was a DNS in the Final.

Team Nitro Kart’s Jacob Graham has been on a tear lately in KA100 Junior, taking his first win in the class at Round 1 of the Karting Challenge in February and then taking his first national win at the USPKS Southern Grand Prix in Ocala, Florida the weekend before this event. The random draw for Heat 1 saw Graham line up 17th out of 18 drivers, but he was able to carve through the pack to finish 5th in the short 7-lap race. In Heat 2, Jacob started on pole and won, but was followed closely home by young Emmo Fittipaldi. In the Final, Graham led early but Tyler Wettengel slipped by to take the point. Jacob was able to retake the lead a few laps later but Wettengel got by on the last lap to take the win with Graham in 2nd.

Hayden Jones carried the flag for Team Nitro Kart in the IAME Junior Division. There was a slim entry for the class but some very fast drivers for Jones to compete with. Hayden won Heat 1 by a tenth of a second over Caleb Bacon and finished 2nd in Heat 2 to Bacon by a similar margin. In the Final, Jones just barely lost the draft around the halfway mark and had to settle for 3rd behind Bacon and Gray Leadbetter.

Team Nitro Kart-supported, Fullerton USA driver, Connor Yonchuck, in only his 2nd ever kart race took the win in the Briggs LO206 Junior Final. Yonchuck, who like Gavan Boschele, comes from quarter midget racing, also swept both heat races, being trailed home by Ian Habiuk in all three races.

Team Nitro Kart’s next event will be the SKUSA SpringNationals at the Phoenix Kart Racing Association facility in Glendale, Arizona on May 4-6. The SpringNationals will be Rounds 3 and 4 of the 6-Round 2018 SKUSA Pro Tour, which will wrap up at New Castle Motorsports Park on August 10-12.