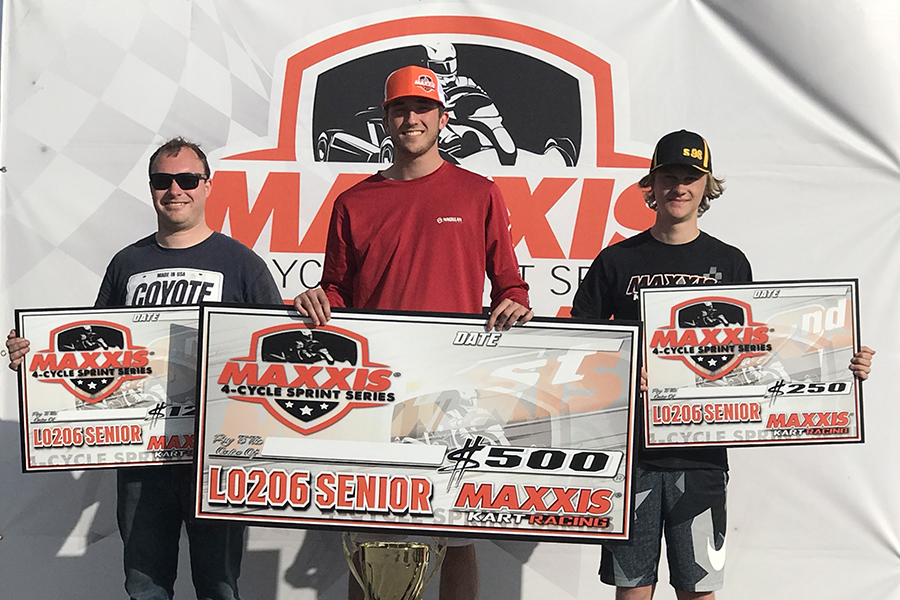 Following a 6th place finish in the season opener at Jacksonville in the Andy Jones Motorsports LO206 Senior class, Aren Lloyd decided it was time to step up, and in a big way. As Race #2 for the Maxxis 4-Cycle Sprint Series rolled into Carolina Motorsports Park in Kershaw, South Carolina this past weekend, Lloyd doubled his chances for success, also signing into the LO206 All Pro class. With the potential winnings in both classes totaling $750, Lloyd hit the jackpot in both, becoming the series first repeat winner for 2018.

Lloyd’s day began in the Andy Jones Motorsports LO206 Senior class, which was the weekends featured Money Class, offering $500 to the winner. Following an early spirited battle with his brother, and Jax Senior race winner Tyler, Lloyd cruised to the first of 2 wins for the day, netting the $500 payday. Coming home second was former Junior national champion and Kershaw regular Austin Williamson, with Sean Meier, Jacob Duvall, and Tyler Swann completing the top 5. For his second place efforts, Williamson garnered $250, with Meier earning $150 for third. Despite Tyler Lloyd’s 6th place run, with the extremely tight point system in place, combined with Bonus points given to fast qualifiers, heat race and main winners, there is a log jam at the top of the standings with the Lloyd brothers and Sean Meier in a virtual deadlock for the series lead at 107 points each.

Lloyd’s success continued in the LO206 All Pro class. With $200 already on the line for the winner, accompanied by an additional $250 in purse money, courtesy of Rob Smith and Kart City Performance, the battle was again on for the top shelf of the podium. Lloyd’s chief rival in this race would be Meier, as the pair literally ran the entire Kershaw course side by side, leaning heavily on each other, while featuring some of the cleanest and most intense racing all day. In the end, Lloyd, was able to hold on for the win, despite a late race excursion off course, which also collected Meier. Fortunately both drivers were able to continue, with Lloyd taking the $250 payday, while brother Tyler was able to slip by Meier and claim second. Meier rebounded for third, with Jacob Duvall and Tyler Swann rounding out the top 5. Competitors in 2nd thru 4th earned $50 each from Kart City Performance. With his 5th place run, Swann also inherits the top spot in the All Pro standings. 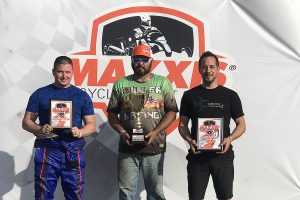 One of the brightest features of the Maxxis Series in the early part of the season is the continued growth of the Brads Karts and Parts LO206 Cadet class. Expanding to 12 entries at Kershaw, the class is also seeing parity right off the bat. Following female sensation Lanie Buice’s win at Jacksonville in April, it was Cameron Weinbergs turn to take command of the event. Weinberg batted .1000 for the weekend, sweeping qualifying, the heat, and the eventual 15 lap main, taking the top honors by some 6 seconds over Owen Lloyd. Following issues in his heat race, Brently Miller charged from the back of the pack, bringing home a hard earned 3rd place finish, with Lane Littleton and Peyton Bridges rounding out the top 5. Bridges also had issues early in the day, forcing the young Georgia driver to make a similar run from the back, much like Miller. After winning Jacksonville, Buice’s success was not as good, as the 1 time winner completed 13 of the scheduled 15 laps in the main event. Weinberg’s win, combined with his 3rd place run at Jacksonville, gives the young driver a 3 point edge over Lloyd, with Miller 6 points back, followed by Buice and Bridges, well in contention, only 9 tallies in arrears. With the bulk of the Cadet class coming from Barnesville, the next event at Lamar County Speedway, which will feature the Cadet Class as the Money Class, offering $250 to win, will be a Must See event. Special thanks to Jeremy Ghent and Kart Carolina for putting up $100 to the Cadet winner this past weekend, as the youngsters put on another great show.

Following a rough outing in the season opener at Jacksonville, Elmer Edmonson rebounded in a big way, taking the Brads Heating and Cooling LO206 Junior main event, sweeping time trails, the heat, and the main, on his way to the win over Will Meeler. With his pair of consistent second place runs this year, Meeler is the points leader, heading into the event at Barnesville, with Edmunson in second. 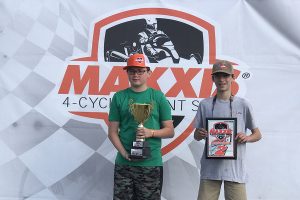 For the second event in a row, young Georgia driver Jaydyn Wilson brought his Kid Kart to the event, thus gaining more laps and exposure, and further preparing him for more competition to come, as Barnesville is his home track.

The finale for the weekend in the Diversified Plumbing Services LO206 Masters class found a past 4 Cycle Champion in the form of Chris Carroll  rolling out the kart, and shaking off the rust, a tall order, considering the competition. For many laps, Carroll began his assault, showing signs of the days of old, but eventually succumbed to the hard charging efforts of Joey Miller, who rolled to his first Masters win of the season, a nice rebound after his last lap misfortunes at Jacksonville. Carroll chased Miller across the stripe for second with James Vanderzee, a 5th place finisher at Jacksonville, improving 2 spots from race 1 for a third place finish.

With their wins in Cadet, Senior, and Masters, Razor Chassis extended their lead in the season long chassis standings, totaling 5 for the season. Comet, on the heels of Aren Lloyds All Pro win, now have 2 wins for the season, while MGM has 1.

The next event for the Maxxis 4 Cycle Sprint Series will be Saturday evening May 12 at Lamar County Speedway in Barnesville, Georgia, as the series runs their only race under the lights. Earlier that day, the Georgia Sprint Karting Association will feature their latest Club event, which will also allow Maxxis regulars to compete, should they prefer. If so, any Maxxis regular can race on Maxxis tires during the Club race, but will not be awarded Club points. As mentioned earlier, the featured Money Class will be the Brads Karts and Parts LO206 Cadet class, awarding $250 to the winner, $150 for second, and $100 for third.

Additionally, Stevie and Stacy Roberts of Roberts Kart Shop will award $50 to the Fast Qualifiers in Cadet, Junior, All Pro, Senior, and Masters. For more information on the Barnesville event, contact Buddy Long at buddy@goldspeedusa.com