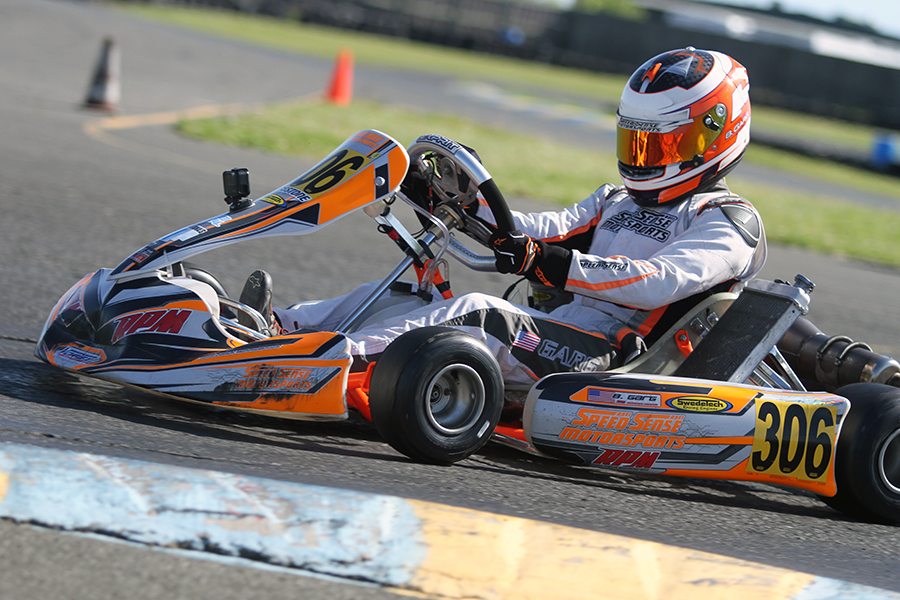 The series finale for Challenge of the Americas welcomed perfect weather conditions for the opening day of racing at the Simraceway Performance Karting Center. The Sonoma, California facility welcomed over 80 drivers in the Rok Cup USA and Briggs divisions for the fifth round of the 2018 championship chase. Saturday provided those in control with the opportunity to secure provisional titles heading into Championship Sunday, thanks to their performances on the day. Saturday gave some the opportunity to claim their first hardware at the Challenge. 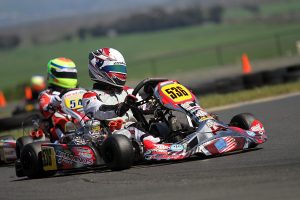 The Senior Rok division looked to belong to Hannah Greenemeier. The Senior rookie arrived Friday morning and was quickest by the end of the day. The RPG / Kosmic driver continued her reign at the front, setting fast time in qualifying and leading all laps of the Prefinal. Hannah continued as the leader early in the Final, getting pressure from CalSpeed double winner Jake Drew (PGR / Ricciardo). Lap eight, Greenemeier came out of toe-tac-tic section, losing a chain and ending her chance at the victory. The fight for the victory now became a battle of four drivers, including Drew, Ryan Tate (FA Kart), Michael Avansino (FA Kart) and Bijoy Garg (SSM / Exprit). All but Tate took a turn at the point with some great racing, that ended with Garg securing the lead with a few laps remaining, breaking away enough to be unchallenged for the victory in his Senior debut. Drew won the fight to the line for second ahead of Avansino with point leader Jim McKinney (Ruthless / FA Kart) sneaking up to fourth in the late goings ahead of Tate. For McKinney, his results helped to clinch the provisional championship with one round remaining. 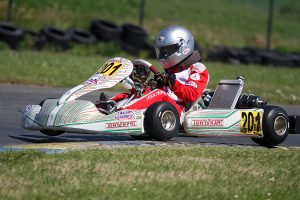 Twenty shifters filled up the Rok Shifter Senior / Masters race group. Point leader Alex Keyes (Birel ART) helped to pad his championship advantage with the five points for fast time in qualifying, while earning 10 with the Prefinal win. Keyes jumped out to a big lead early in the Final with drivers fighting for the second spot. Hunter Pickett (Aluminos) eventually put himself into second by the halfway point and quickly ran down Keyes. In a blink of an eye, Pickett took over the lead and began walking away. In the end, Pickett scored the victory by one-second over Keyes, who locked up the provisional championship. Nicky Hays (PGR / Ricciardo) ended up third on the podium. Kol Bailey (LEM / Praga) was fourth but handed a two-position penalty for contact, moving Zach Pettinicchi (VSR / Tony Kart) to fourth and Clinton Schoombee (Aluminos) into fifth. Patrick O’Neill (RWR / CRG) was able to steal the victory from Kevin Woods (RWR / CRG) late in the Final. Championship contender Nick Firestone (DR Kart) worked his way up into the second spot over Michael Guasch (LEM / Formula K) with Jeff Smith (Tony Kart) in fifth.

Things were decided on and off the track in the Junior Rok division. On track, Austin and Ashton Torgerson stepped up their game to challenge point leader Ugo Ugochukwu. The trio were separated by just 49 thousandths on qualifying with Ugo (Tony Kart) scoring the pole position over Ashton and Austin. Ugo led the majority of the Prefinal till Austin secured the spot late and the race win. The trio locked up early and got away from the rest of the field in the Final. The Torgerson brothers were locked up, with Ashton pushing Austin most of the race. Ugo slipped past Ashton on the final lap but contact allowed Austin to get away and reach the checkered flag first. Officials however penalized Austin for contact early in the race with Ugo, thus promoting Ugo to the victory. The win gives Ugo the provisional championship heading into the season finale. Ashton was classified second with Austin third. Ethan Ho (Redspeed) drove to fourth with Bryson Lew (Tony Kart) in fifth. 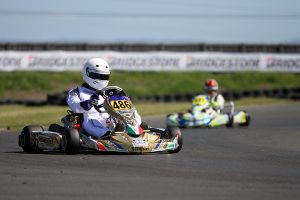 Erik Jackson ran away with his first victory on the year in Masters Rok (Photo: EKN)

It was a near sweep in the Masters Rok division for championship leader Erik Jackson (Vemme Kart). David Pergande (FTK / Tony Kart) shocked the paddock with fast time in qualifying, while nursing injured ribs. Jackson jumped out to the lead in the Prefinal, and showed the way the entire 17 laps. It was the same in the 25-lap Final, with Jackson going wire-to-wire for his first victory of the season and fifth straight podium to lock up the provisional title. Jonathan Silva (FW / CompKart) closed up on Jackson mid-race, but a slipup while on his bumper dropped him back to third. He worked back around Nick De Graaf (Vemme Kart) for second but ran out of time to close in. De Graaf completed the podium in his 2018 series debut with Ed Quinn (FTK / Birel ART) fourth and Mike Giles (FTK / Birel ART) fifth after Pergande retired after losing a chain. 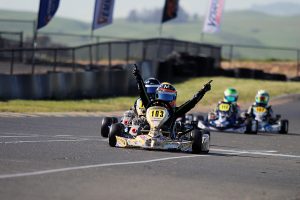 Logan Toke (Top Kart) appeared to have the Mini Rok division in hand throughout the day. Toke set fast time in qualifying and held off a charging Chase Gardner (Vemme Kart) for the Prefinal win. Toke jumped out to the lead in the Final with Gardner dropping back at the start. Enzo Swan (Benik), Ethan Nascimento (Vemme Kart) and Stephen Eisert (Praga) were all in the lead group of the Final. Swan took a turn at the point as did Gardner before Toke retook the position. The top five continued swapping position till the very end, including the final circuit. Gardner was able to secure the lead and cross the line first for his second victory of the series, locking up the provisional championship. Nascimento led for a moment, but had to settle for second to earn his first podium finish of the year, with Swan in third. Eisert was fourth with Toke getting shuffled back to fifth. Nico Sarphati (Kosmic) scored the Micro Rok victory over championship leader Gage Jarvis (Benik).