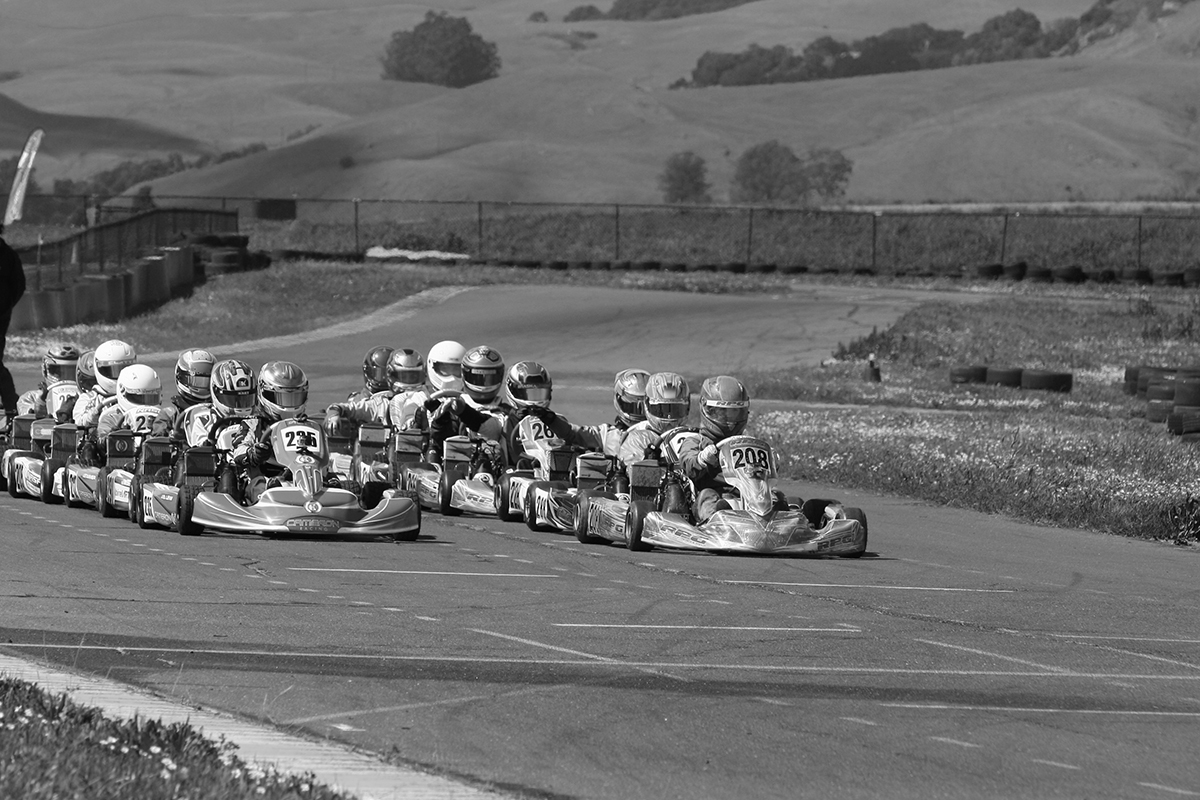 The 11th season for Challenge of the Americas is set to close this weekend at the Simraceway Performance Karting Center. The famed Sonoma, California facility is welcoming ROK Cup USA drivers from across the country to settle the battles that began in Phoenix for the chance to compete on the international stage. All ROK champions of the Challenge will put their name on a ticket to one of the largest and grand karting events in the world – the ROK Cup International Final in Lonato, Italy this October. Not only are race wins crucial this weekend, ever point earned or not earned could decide a trip to the famed Italian circuit and becoming an inaugural Challenge of the Americas ROK champion.

EKN continues its long-term partnership with the Challenge, providing unmatched Trackside Live coverage throughout the finale weekend. The entire weekend in Sonoma will be available at the EKN Live page – www.ekartingnews.com/live – with EKN’s own Rob Howden on the microphone providing the play-by-play call. Daily reports and updates on the EKN Social Media network will fill up your timeline throughout the weekend. 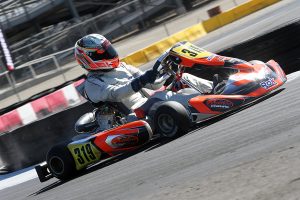 Jim McKinney is looking to go wire-to-wire in the championship chase (Photo: EKN)

The pressure in the Senior Rok category is exclusively on Phoenix double winner Jim McKinney. The FA Kart driver racked up two perfect scores at his home track, adding two podium finishes in LA to secure a 106-point advantage heading into Sonoma. The trip to Italy depends on the opening round performance where McKinney can further lock up the title or allow either Bailey Murphy (Deadly) or Jenson Altzman (FA Kart) a chance on Championship Sunday. All three call Arizona home, and are making the trek to wine country to decide this year’s title chase. Murphy only has one podium finish while Altzman has zero, riding on four top-five finishes.

A few drivers can mix things up, including double CalSpeed winner Jake Drew set to make the journey north. Drew (Ricciardo) put in two perfect performances of his own in his series debut at Fontana. Only 98 points back when factoring a drop, two more perfect days in Sonoma could provide him with the upset and steal the title. The other is Hannah Greenemeier (Kosmic). The longtime COTA driver and Senior rookie is making her 2018 series debut in Sonoma, site of her only series Junior victory last year. 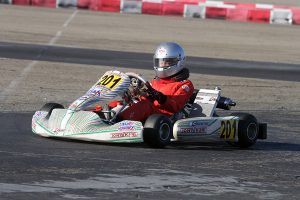 Three wins in four rounds of competition in the Junior Rok division have New York driver Ugo Ugochukwu (Tony Kart) at the top of the standings. Ugochukwu went perfect in Phoenix but was challenge in CalSpeed, coming away with near sweep on Saturday and only a third place result to close the weekend. Heading to a more familiar Sonoma circuit, Ugo seeks his first COTA championship. In the way is Round Four winner Austin Torgerson. A former Mini champion, Torgerson (Tony Kart) will need to put together a couple perfect days to keep Ugo from the top step of the championship podium. Aside from the top two, five others have stood on the podium over the four rounds. The only two in Sonoma will be Ashton Torgerson (Tony Kart) and Ethan Ho (Redspeed). A number of local drivers will also be making their first COTA start of 2018. 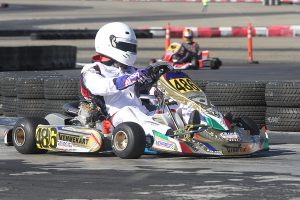 Erik Jackson hopes to lock up the Rok ticket in Masters (Photo: EKN)

The Masters Rok division has been one of drama throughout the series. Double Phoenix winner Adam Kasick took his trophies and left, not able to compete in CalSpeed, leaving a void at the top. It was projected to Paul Bonilla to fill in that slot, however, a DQ in Round Three is a major blemish in addition to his Round Four victory and three podium finishes. Bonilla will be MIA for Sonoma. That leaves three drivers to fight it out for the title. Erik Jackson is using four podium finishes in four rounds to enter the finale weekend as the championship leader. Jackson (Vemme Kart) was runner-up in Round One and ripped off three straight third-place performances. Round Three victor Jonathan Silva (CompKart) is the lead challenger, back by 75 points. With no other podium finish, the gap closes to 36 when factoring in a drop. One point back is David Pergande (Tony Kart), who has yet to take home any hardware in 2018. 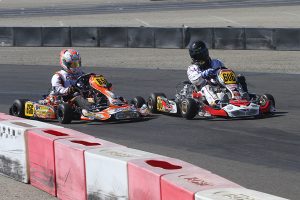 In most sports, home court or field advantage helps to secure a championship. The same could be said for motorsports knowing the ins and outs of a track. That advantage goes to Rok Shifter Senior point leader Alex Keyes (Birel ART). The GRC driver returning to his karting roots went on to win both main events in CalSpeed, completing four straight podium finishes on the season to move himself atop the championship. The two wins Keyes has matches the total of Kol Bailey and Nicky Hays combined. Bailey (Praga) score the sweep in Round One with Hays (Ricciardo) performing the same feat in Round Two. Bailey has stood on the podium in all four rounds, while Hays suffered engine issues in Round Four, thus finding himself third behind Bailey. Seventy-four points separate the three drivers heading into the weekend. Clinton Schoombee (Aluminos) was an added player in Fontana, earning a runner-up on Sunday and primed to challenge for the steps in Sonoma. A number of local drivers are expected to shine, including Zach Pettinicchi (Tony Kart), Enzo Prevost (Aluminos) and Hunter Pickett (Aluminos) making his COTA 2018 debut. 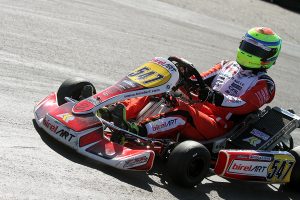 Just eight points separate the top two in the Rok Shifter Masters championship chase. Nick Firestone (DR Kart) swept the opening weekend at his home track in Phoenix. Kalvin Chen (CRG) did the same in Fontana, missing out on the fast lap bonuses to find himself trailing in the standings to Firestone. The two will settle the battle in Sonoma, with Rob Kozakowski (K&K) and Zoli Sule (Aluminos) joining the fight on the weekend along with local driver Patrick O’Neill (CRG).

The championship chase in the Mini Rok division is likely to go down to the wire with the top two only separated by 36 points. Chase Gardner (Vemme Kart) has stood on the podium all four rounds to be the championship leader going into Sonoma. Two wins in Fontana put Logan Toke (Top Kart) to the second spot, and the lead challenger in chase. Round One winner Enzo Swan (Benik) has a shot to steal the title, sitting just 75 points back and needing a perfect weekend. Parker DeLong (Benik) and Kai Sorensen (Benik) were also in the fight, however, are not scheduled to compete. 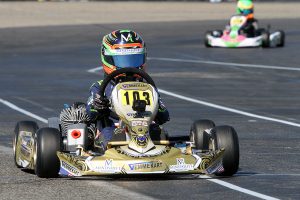 Chase Gardner is the driver to beat in Mini Rok (Photo: EKN)

Gage Jarvis (Benik) will complete his championship season in the Micro Rok division in Sonoma. The weekend is complete with the Briggs 206 Senior and Briggs 206 Junior categories racing for another weekend of prizes, including $500 to the Senior winner and other awards to the top-three finishers in both classes.