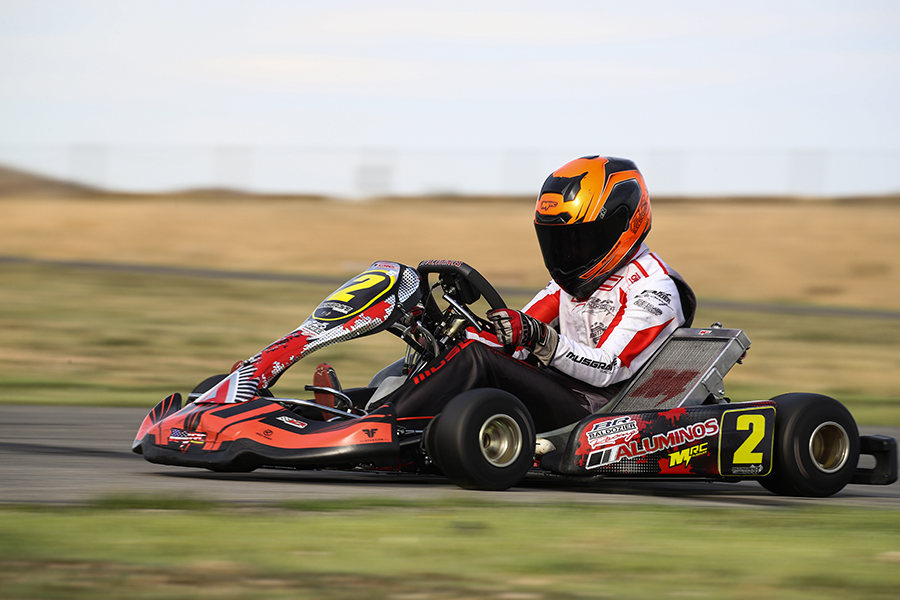 The California ProKart Challenge allowed its racers to stretch out their karting machines for the second round of the 2018 season. On March 30-31, the Superkarts! USA flagship regional program visited the Streets of Willow course at the Willow Springs International Raceway facility in Rosamond, California. The 1.6-mile course – with a reduced layout for X30 Junior and Swift drivers – took racers away from the normal karting track and onto a road course, reaching the highest speeds of the season. The 12 categories were put together into four race groups on the day, sticking with the same qualifying, two heats, and main event format. A number of classes were swept on the day, while others went down to the wire.

All six Stock Honda categories took to the Streets of Willow circuit in a combined race group throughout the day, putting 50 karts on track to make every session a busy one. At the front of the field all day was Billy Musgrave. The four-time series champion and SuperNationals 21 victor swept the Mad Old Nut S1 Pro Stock Honda class, but it was not easy. Musgrave cleared the entire race group by half a second with a 1:15.311-lap time, ahead of S1 rookie Rory van der Steur and Josh Lane, making his return to the California PKC. It was Brian Keck that put the pressure on Musgrave in Heat #1, stealing the lead for four laps until Billy retook the position and the win. Heat #2 saw van der Steur leading four laps before Musgrave resumed the spot – right before a red flag and restart cut the session short. Musgrave and van der Steur were able to get away from everyone in the 14-lap Final, making it a duel for the victory. Rory led the majority of the race, with Musgrave leading the final two circuits. At the line, the two were separated by 76 thousandths of a second at roughly 80mph. Lane was on the podium in third to cap off his return to the seat, while Matias Podboj and Peter Abba completed the top-five. 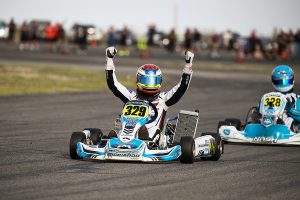 The Swiss-Micron S2 Semi-Pro Stock Honda division was decided after the final checkered flag. Garrett McKelvie was at the front of the field all day long, setting fast time in qualifying and winning both heat races. McKelvie went wire-to-wire for the provisional victory – until he was removed from the results for a technical issue. This promoted Carlee Taylor to the top of the podium for her first California PKC victory in the category. Keawn Tandon and Prescott Campbell joined her on the steps, with Anthony Fontana and Round One winner Dean Heldt completing the top-five. 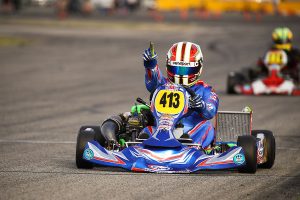 Twenty-eight drivers fought for the chance to leave the Streets as the victor in the Phil Giebler Racing X30 Senior division. With the drafting and racecraft, there was no clear-cut favorite throughout the day. Despite the large size of the course, three drivers qualified within 77 thousandths of a second at the top of the chart. Jacob Gulick was best with a 1:18.552-lap, quicker than Edward Portz and Trey Brown. Gulick never led in Heat #1, with Canadian Samuel Lupien taking the lead early. Brown took over the spot for the middle portion of the race before he and Lupien swapped for the top position in the final laps. Brown came away with the win over Lupien. The fight continued into Heat #2 with Brown edging Lupien at the line by four thousandths of a second. The win was taken away from Brown, with officials handing him a three-position penalty for jumping the start. That gave Lupien the win – promoting Jake Drew to second and Ethan Barrett to third. Drew took advantage at the start of the main, jumping out to the lead on the opening circuit and then leading all 14 laps for his first series victory. Brown and Lupien ran second and third, with Nick Persing posting fast lap of the race in fourth. Brendon Cramer rounded out the top-five.

The Rolison Performance Group X30 Master class and Empire Karts X30 Super Master division ran on track at the same time with the Senior race group. Round One winner Nick de Graaf appeared to be en route to a second straight victory on the season, as he set fast time in qualifying and came away from both heat races with the class win. Kevin Manning stepped up in the Final, however, taking the lead and running away to a 10-second advantage for the victory. de Graaf settled for second, with Robert Drenk finishing third in his 2018 debut. Steve Ryckebosch scored the victory in the Super Master division in his first start of 2018. Ryckebosch edged out Round One winner and top qualifier John Nielsen for the victory. Stuart Hayner won both heat races, but lost the draft to end up third. 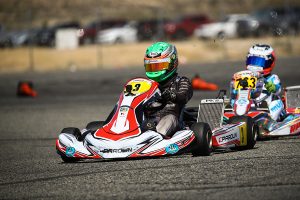 It was a near sweep for Oliver Calvo in the Nash Motorsportz X30 Junior category. Just 27 thousandths separated the top-three in qualifying with Calvo at the top, edging out Josh Pierson and Round One winner Alan Tang. Calvo led all but the last lap of Heat #1, getting shuffled back to fourth – with Tang winning, Jace Denmark-Gessel second and Cole Morgan third. Calvo sat on the bumper of Morgan throughout the second heat, slipping past on the final lap for the win. No one was able to break away early in the Final, with Jace and Kameron Perry leading early. Morgan took the lead on lap six with Calvo coming up to second. Prior to the white flag, Calvo took the lead and held off Morgan to score the victory. Portz joined them on the podium, with Denmark-Gessel finishing fourth with fast lap honors. Bryce Stevens completed the top-five.

Kai Sorensen emerged as the driver to beat in the Ryan Perry Motorsport Mini Swift division. It was a drive from the back as Sorensen was removed from the results for a dislodged side pod at the end of Heat #1, won by Logan Toke. Sorensen worked his way from the back of the 15-kart field to the lead in just five laps, scoring the win in Heat #2. From there, he led wire-to-wire in the 10-lap Final, holding off a late charge by Toke at the line by 35 thousandths of a second. AJ Zarcone joined them on the podium, with Jackson Menchu in fourth and top qualifier Cooper Hicks in fifth. 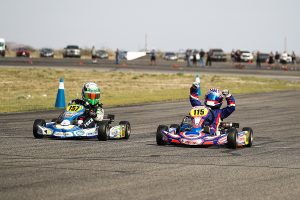 Graham Trammell scored a second straight victory in the PKS Kart Supplies Micro Swift class. Logan Chambers was the top driver early on, with fast time in qualifying and a Heat #1 win. Trammell stepped up to win Heat #2, carrying on to win the Final by over three seconds ahead of John Antonino. Chambers and Kane Martin finished third and fourth, but both failed a clutch test. That promoted Chad Reed to third.

The 2018 California ProKart Challenge takes the months of April and May off, with the Superkarts! USA Pro Tour SpringNationals taking precedence, set for May 4-6 at the Phoenix Kart Racing Association. The California PKC resumes with Round Three, set for June 1-2 at the CalSpeed Karting Center in Fontana, California. For more information on anything related to Superkarts! USA, please visit the website – www.superkartsusa.com and be sure to follow the Superkarts! USA Facebook page, Twitter and Instagram accounts.