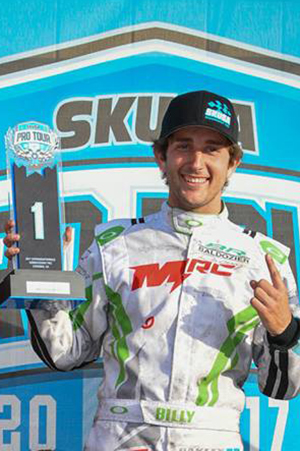 Billy Musgrave would continue his winning ways as he claimed victory at Round 2 of the 2018 SKUSA California ProKart Challenge series. The tour would head to Willow Springs Raceway in Rosamond, California but instead of using the traditional Kart circuit, the series would utilize the fast Streets of Willow circuit which would entail lap times well over a minute and feature close slipstreaming battles.

In the Phil Giebler X30 Senior division Musgrave would qualify in the 11th position, within a half second of pole. A 13th place finish in heat 1 would be followed by a ninth place finish in heat 2, indicating that steady progress was being made. In the main event Musgrave would run as high as 8th but luck would not be on his side as two separate incidents would drop the Mad Old Nut/Mad Croc X30 kart to the 20th position by the time the checkered flag fell. While Musgrave was disappointed, he was not discouraged. “Our final result was not indicative of the pace we had,” said Musgrave. “I know we had a top-5 within our reach and I intend to prove that when we get back on track in Phoenix for the next Pro Tour round.”

His fortunes would fare much better in the Mad Old Nut S1 Pro Stock Honda class where Musgrave would again claim pole and sweep both heats though the main event wouldn’t be as easy as round 1 at Buttonwillow. A hectic run group schedule left the team scrambling to get everything ready, with the Musgrave Racing Company team thrashing to make it to grid. “We only had four run groups today and I was in two of them so it was a crazy scramble but we made it work,” said Musgrave. A frenetic Willy Musgrave had to run to get Billy’s kart on the line for the main event but once his kart was ready, Billy would take care of the rest.

When the green flag dropped, second row starter Rory Van der Steur would take the early lead. Musgrave would bide his time and the pair would steadily pull away from the rest of the pack. By the halfway point it was apparent this race would be a two-driver battle for the win and with two laps to go Musgrave would make the move to put his MRC/Aluminos kart out front. On the final lap the two would again exchange the lead and were nearly side-by-side as they drag raced to the line but a triumphant Musgrave would hold on for the narrow 0.076 second victory. An excited Musgrave was relieved to cling on to the win. “That was definitely a tough one to pull out,” said the S1 class points leader. “With the draft on this track it’s nearly impossible to pull away if you’re leading and sometimes being in front makes you a sitting duck. But I felt I could make it work and we just barely held on. What an awesome win for Aluminos and Team MRC!”

The next SKUSA race on the schedule are rounds 3 and 4 of the SKUSA Pro Tour when they head to the Phoenix Kart Racing Association circuit in Phoenix, Arizona on May 4-6. For more information visit superkartsusa.com and follow all the action on ekartingnews.com.