The Los Angeles Karting Championship continued on with its 2018 schedule, hosting Round Two of the season on March 25 at the CalSpeed Karting facility in Fontana, California. A larger total number of entries increased the paddock size along with special guest Jay Leno. The longtime comedian and TV host brought his production crew to film interviews and footage for an upcoming broadcast of the Jay Leno’s Garage show, set to begin Season Four in April. Perfect California weather greeted the small-screen legend and car enthusiast, and the over 150 entries competing the diverse class lineup of the LAKC. 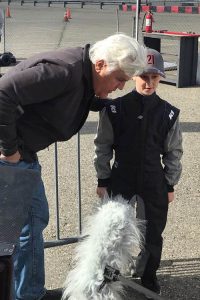 TV star and comedian Jay Leno during one of his interviews with Micro and Mini Swift drivers at Round Two of the Los Angeles Karting Championship (Photo: Doug Fleming)

“I want to thank the parents and teams for the professionalism that was displayed during race day. It was one of the smoothest races we’ve ever had,” stated Los Angeles Karting Championship President Willy Musgrave. “Our only issue was with the live timing as we had some problems, however, things have already been fixed for our next event. It was a pleasure to have Jay Leno and his crew on hand, which will be a great promotion for not only LAKC, but the sport of karting in general.”

The on-track action was led by John Crow, scoring three wins in three different categories. Crow was able to score the victory in the PKS S4 Super Master Stock Honda division to set establish himself as the driver to beat in 2018. Warren Kindberg broke up the perfect score opportunity after qualifying P1 in class. Crow struck back to win the Prefinal, and then the victory in the main event by four seconds over Kindberg and Brett Harrelson. Crow jumped back into the Mike Manning Karting X30 Master division, going wire-to-wire on the day. Crow set fast time in qualifying, leading all the laps in the Prefinal and Final to sweep the day. Round One winner Branden Bell was second with Robert Drenk in third. Steve Martin and Scott Cebulski completed the top-five. The third victory can in the iKart West Briggs 206 Master class. It was a second straight event sweep for Crow in the category, including the overall victory in the race group. Robert Drenk and Mikey Griffin joined him on the podium.

The P1 Engines Mini Swift class was the largest of the day, featuring 21 young drivers. Troy Hageman came out of a tight qualifying session with fast lap, edging out Round One winner Logan Toke and Kasey Gillis by less than a tenth of a second. Jesus Vasquez Jr. qualified fourth and came out of the Prefinal with the win, starting P1 for the Final. He would lead the majority of the race until pressure from Toke set in. The two went back and forth in the final laps, matching fast laps of the race, and drag raced to the checkered flag for the victory. At the line, Vasquez held the advantage over Toke by just 89 thousandths of a second to earn the win. Gillis completed the podium with Hageman in fourth and AJ Zarcone in fifth.

John Antonino was able to repeat as winner in the Empire Karts Micro Swift division. Antonino began Round Two where he left off, at the top of the results sheet with fast lap in qualifying, clearing the 18 driver field by two tenths of a second. John led the opening laps of the Prefinal until California ProKart Challenge race winner Graham Trammell slipped past for the lead and the win. The Final was nearly a duplicate with the roles reversed. Trammell led the majority of the race until Antonino took back the lead with three circuits remaining. The Round One winner held on to the end for the victory with Trammell runner-up in his LAKC debut. Keagan Kaminski stood on the podium in his 2018 debut with Truly Adams and Gavyn Decuir rounding out the top-five.

The Ryan Perry Motorsport X30 Junior Expert class saw another driver repeat victory from Round One. Alan Tang scored his first LAKC victory in February, and doubled his score with the triumph in March. Tang came up just short in qualifying, with Cole Morgan keeping him from a perfect score on the day. Morgan edged out Tang and Bryce Stevens by under a tenth of a second. Tang got the jump in the Prefinal, leading all 10 laps ahead of the duo. Morgan was able to grab the lead at the start of the Final, showing the way for the first three circuits. Tang retook the lead, and with fast laps of the race, drove away to a eight tenths of a second advantage for the victory over Morgan. Jacob Yesnick stood on the podium in third with Dominic Gorden in fourth and Jonathon Portz in fifth.

There was no clear cut star in the MRC S3 Novice Stock Honda division until the final checkered flag waved. Tyler DeGraff set the pace in qualifying with Round One winner Eddie Tafoya coming away with the win in the Prefinal. Jacob Pope saved his best for the end, working past Tafoya for the lead near the halfway point. Pope held off Tafoya for the remainder of the 18-lap battle to score his first victory of the 2018 season. DeGraff completed the podium in third behind Tafoya.

Ethan Barrett made his 2018 LAKC debut in the Nash Motorsportz X30 Senior Pro division a good one, scoring the victory over the nine driver field. Jacob Gulick stole the show in qualifying, edging out Barrett and Edward Portz by less than one tenth. Barrett and Gulick went back and forth for the lead in the Prefinal until Ethan secured the spot and the win. It was wire-to-wire in the Final, with Barrett pulling out to a three-second advantage after 18 laps. Portz and Cody Kelleher completed the podium with Round One winner Alex Siragusa in fourth and Gulick back to fifth.

The 2 Wild Karting X30 Senior Intermediate class grew to 14 drivers for Round Two and featured a different winner. Cody Diggs was able to improve one spot from his finish in February to claim his first victory of 2018. Diggs was able to hold off Payne Brawley and Gregory DiMaggio for the victory. Cody Ensign was fourth with Lauran Adams in fifth. Former champion Rob Logan made his return to LAKC in the Kimball Williams Racing S4 Master Stock Honda, scoring the sweep of Round Two. Logan went unchallenged all day, driving to an 11-second advantage over Zoli Sule with Billy Cleavelin in third.

Jetson Lieser was another repeat winner at Round Two, besting the seven driver field in the Mack Motorsports Briggs 206 Senior division. It was a battle all day with Daniel Eaton scoring fast time in qualifying and Josh Todd winning the Prefinal. Lieser was able to get away from the field in the Final, driving to a 10-second gap for the victory. Eaton and Ryan Carey joined him on the podium.

The KA100 classes will be one of growth for the 2018 season thanks to the IAME/LAKC promotion. Anyone who purchases a new IAME KA100 engine will receive three (3) free LAKC entries for 2018, with the discounted price of $1,695 extended for the month of April. On track, Luis Perez became a first-time LAKC winner, scoring victory in the IAME USA West KA100 Senior class. Perez bested Chance Skaufel and Jared Caylor. Robert Perez made it two straight sweeps in the Superkarts! USA KA100 Master division, outrunning Jeff Thralls all day.