The Art of Racecraft: TJ Koyen 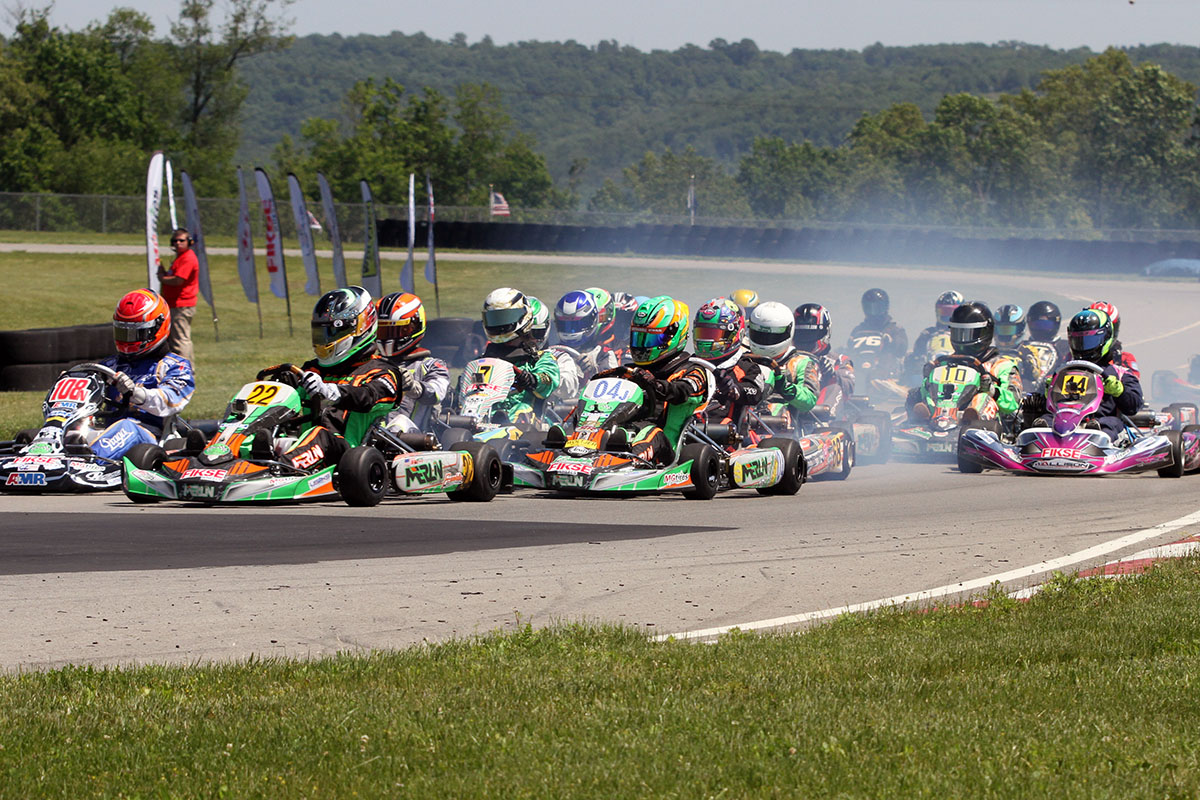 The hottest topic of discussion in the sport right now is centered on a negative culture shift in driving standards, most predominently seen in national level competition. Over the next few months, EKN will be presenting an article series that features the thoughts and beliefs of some of the most respected drivers and industry veterans in the sport. It is out hope that drivers, tuners, coaches and parents will all take the time to read these submissions, and discuss their merits, so that we can reverse the slow decay of racecraft that we’re seeing in our incredible sport. With that, here is the first column in our series called ‘The Art of Racecraft’. 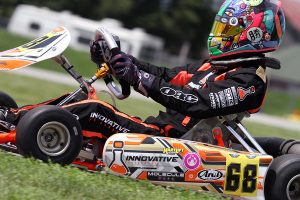 The karting season is upon us once more, and like any other karting enthusiast, I am super stoked to get back in the seat myself. Unfortunately, Midwest weather will keep us off track for a couple more weeks but, in the meantime, I’ve had plenty of other karting events to watch from warmer parts of the country. For years, I’ve always loved watching event coverage, getting the latest paddock gossip, seeing who has switched teams, and entertaining whispers of what the next “hot” chassis is, but these past couple years have been a bit different. The mood has soured a bit after most race weekends.

I’m getting pretty tired of reading about ‘racecraft’ or the lack thereof on social media after every big race. It truly bums me out. It seems like now, the hot gossip week in and week out falls into a few categories: Who wrecked who? How many karts didn’t finish the final due to contact? Which officials screwed up this week? Karting racecraft seems to be the hot topic of debate at every event, and as an active national-level driver for the past 13 years, I’ve seen first-hand how driving standards have devolved from respectful to embarrassing in a matter of years. Every Facebook thread I read turns into a 100-comment blame game, but make no mistake, the fault doesn’t fall to one person or group. Karting is a community, and if we want our sport to grow and improve, we all have to fix it together.

The main issue of today’s lack of driving standards is, of course, over-aggression from the drivers on-track. This is obvious. Why are we all ramming into each other though? Well, there are a few factors. The introduction of the full-width rear bumper was both a blessing and curse. Yeah, sure, we all love not getting our $700 radiator ripped off on the start, but the knock-on effect of the bumper is that your target just got twice as wide if you’re trying to punt someone off the track, and because the wheels are covered, there’s no penalty for doing so. Fortunately, the polarizing drop-down bumper has been introduced. I was originally against it, as I felt it tainted the purity of close, aggressive racing, and that it was a flimsy band-aid for a fairly big problem. However, as any good and decent man does, I am willing to admit I was wrong. After racing with this system for a full season at the United States Pro Kart Series, I firmly believe that it is a good short-term solution. It still allows some bump and grind, so the racing isn’t neutered, but it almost completely eliminates the destruction we’re seeing on the first lap. This is a good thing. 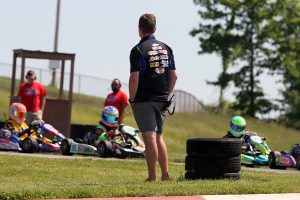 Another factor that has contributed to the smash-fest we see at top-level events is the officiating and penalty system. I know that race directors and series officials have an incredibly tough, if not impossible, job trying to assess and penalize drivers appropriately. With 30+ karts on the track, it’s literally impossible to see everything that’s happening. Some series have introduced video marshaling systems, which can be great, if they’re working, but in the end officials still need to review the incident, leaving room for interpretation and human error. As I see it, there just simply aren’t enough penalties being called, and the ones that are called, aren’t nearly strong enough for the infraction. I really would like to see some kind of licensing system implemented, where a driver who accumulates enough penalty points is no longer able to compete for the rest of the season. Part of the issue with time or position penalties, is that the offending driver just ends up starting deeper in the field and they’re probably going to try and smash their way to the front again. I can tell you from experience, when you’re starting in the back of a big field, 90% of the drivers are thinking they have nothing to lose and are going to be extra aggressive.

The final reason we are seeing melees in every race is because of parents, tuners, and teams. It’s almost unbelievable, but there are kids out there who are BEING TOLD to wreck or move people out of the way on track. I’m not telling anyone how to raise their kid, but as soon as little Johnny punts me off in turn three, you better believe his parent/tuner/babysitter and I will be having a conversation about mutual respect at the scale line. Folks, we need to be instilling positive values into our young drivers, and grooming them to be good people as well as great racers. It will serve them far better in life down the road. Once little Johnny gets to F1 or IndyCar or NASCAR, then he can drive as ruthlessly as he needs to (within the rules of the series) to win a championship, but we need to remember that this is kart racing. 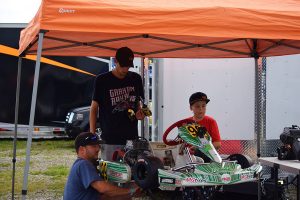 “…we need to be instilling positive values into our young drivers, and grooming them to be good people as well as great racers” (Photo: USPKS)

Slightly along the same lines of this point would be the disappearance of low-budget teams at big events. It’s not my business to comment on how someone spends their money, and you better believe if my budget allowed, I would spend all my money on karting, but when the majority of the paddock has essentially unlimited resources, several spare chassis, and no fear of wrecking parts, there is little to no respect for the driver’s equipment. If we wad this frame up, no big deal, there’s ten more in the trailer! I have always competed on a small budget, and usually for me this isn’t too big of an issue (I hate using my lack of budget as a crutch when I finish P23), but I definitely know that I need to be a little more cautious on Saturday because there isn’t always going to be a spare frame for Sunday if I destroy something. Drivers are not only losing respect for each other, but they’re losing respect for their equipment as well.

All of these issues contribute to a breakdown in racecraft for drivers coming up through the karting ladder. The art of the overtake, proper defending, respect and etiquette, and driving with your brain have all been traded in for the ‘bump-and-run’. Don’t get me wrong, I love hard aggressive racing and can live with a little contact, but some of the stuff I see these days is downright disgusting. I spent years learning how to properly overtake, and now as a driver coach and tuner, I’m trying to pass those lessons onto the next generation of racer.

Overtaking is truly an art form. To take the kart and place it off the ideal racing line, push past the optimal braking point, and come out ahead at the exit of the corner requires a lot of skill, finesse, and bravery. Usually, when an overtake fails and contact occurs, it’s because one or both drivers were either too committed or not committed enough. Drivers need to learn when they are able to claim the corner as their own, and conversely, when to concede the corner. Too many times I’ve seen a driver try to hold the outside of a corner while being passed, only to run out of room on the exit and end up in the grass. If you have the distinct pleasure of standing next to me while watching one of my drivers race, you’ll probably hear me yell “don’t hold the outside, give it up!” at least three times every race. If the driver overtaking you can’t be squeezed out, it’s better to think long-term and to concede the spot and live to fight another lap. On the other side of the situation, a driver who tries to put the kart into a space that is closing or doesn’t identify when a pass isn’t on, and doesn’t back out soon enough, will almost always pay a price for that as well. Finding the right level of commitment is key, and that just takes practice and coaching. 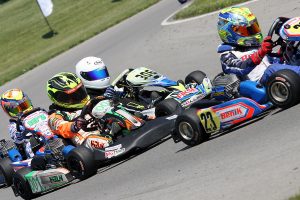 “The art of the overtake, proper defending, respect and etiquette, and driving with your brain have all been traded in for the ‘bump-and-run” (Photo: EKN)

One thing that has really bothered me in recent years is the egregious swerving I see from defending drivers. Apparently, it’s become acceptable in some of these drivers’ minds to just jerk the wheel into other drivers as they are trying to overtake. This is something that really upsets me when I watch it, because I’ve never seen a penalty called for it and it’s seems just as dangerous and aggressive as hitting someone in the rear bumper. This is an extreme form of defense. I have absolutely no problem with the ‘one-move rule’, allowing drivers to defend and crowd another driver on the straight, compromising them in an effort to hold the spot, but when a driver looks over at another driver and swerves into him, that’s a line crossed. This is racing, it’s offense and defense, but we aren’t driving rental karts. There are limits to adhere to.

In the end, it all comes down to respect, whether it’s for your equipment, your fellow competitor, or even yourself. Unfortunately, over-aggressive driving is what my high school science teacher would call a ‘positive feedback loop’. As drivers start making more contact to move forward, other drivers will think that the only way to win is to do the same, so the rough driving is amplified. However, if we all start learning to respect each other a little bit more and give each other just an inch when we’re racing hard, we can flip that cycle. If you start to respect your competitors, they’ll start to respect you, and maybe they won’t shove you off in turn one next time. As the rough driving starts to go away, it becomes less necessary to drive like that to succeed, so everyone calms down a little. It pains me to see the carnage in some of these races and the ensuing fallout afterward.

My hope is always that everyone gets to race hard, stays safe, and at the end of the year you can go over and hang out with your fellow racers without fear of getting punched in the face. We’ve all got to do better – drivers, parents, tuners, teams, and officials – to make sure that our favorite past-time remains fun without compromising the fierce competition we all love.

4 thoughts on “The Art of Racecraft: TJ Koyen”