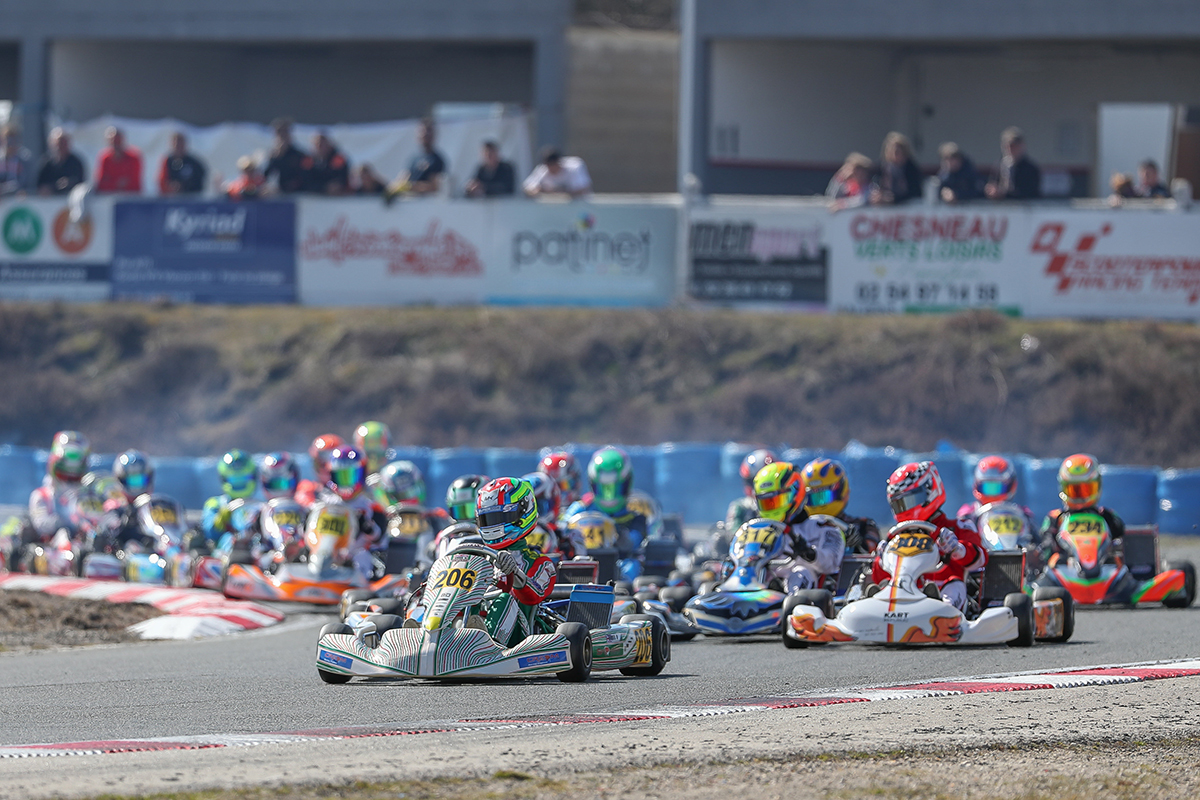 The 2018 RGMMC IAME Euro Series kicked off in style with the first round taking place at Salbris, France with 160 entrants present in 4 categories. Long entry lists meant the warriors had to go through 22 intense Qualifying Heats, and 2 Second Chance heats before the finalists were decided, while for the non-qualifying drivers there was the Komet Cup just before the prefinals on Sunday.

RGMMC always making the best efforts to set the benchmark for motorsport race organization and promotion, once again continued innovating with most notable this weekend the big improvements on the quality for the Live Video coverage, demonstrating the strong belief in the importance of delivering the full racing experience straight to the viewers, for the entire duration of the event.

The event official sessions started with very cold temperatures, and the weather forecast showing heavy clouds and rain, however as the weekend progressed the temperatures rose up to a warm 18 degrees Celsius on Sunday with a very nice sunshine throughout the day, and the rain only making its appearance hours after the end of the race.

From the first qualifying session the Spaniards Alejandro Menendez and Sergio Ruiz Alvarez showed their speed, with Menendez setting the fastest lap of the two. Right behind them the Belgian Kimmy Abraham was the driver to complete the top-3 for the qualifying heats starting grid.

While only managing one win on his final heat, Ruiz Alvarez’ consistency secured him the best starting position for Sunday’s prefinal. His team-mate Miguel Peiro locked the front row, while right behind them Ruben Volt and Nathan Ottink got a nice jump over Abraham and Melendez who couldn’t keep their initial timed-qualifying positions over the qualifying heats. In the prefinal, Ottink found a great amount of speed, and managed to finish first ahead of Melendez and Ruiz Alvarez. Peiro in the meantime was penalized for a technical non-conformity, being forced to start the final from the back of the grid.

Ottink got the best of Melendez at the start of the final, while behind them a collision saw Abraham, Ruiz Alvarez and Kowalewski’s race end at the first corner. On the third lap Volt made his attack overtaking Melendez and a couple of laps later taking the lead. This however didn’t last long as a battle between the three saw them exchange positions several times in the closing laps with Melendez crossing the line first just a tenth of a second ahead of Volt with Ottink losing out to the recovering Peiro, who fought his way back all the way from last on the grid to complete the podium.

It was the turn of the most powerful and spectacular category of the IAME Euro Series to hit the track. On Friday’s Qualifying Practice is was Sten Piirimagi who was the fastest, ahead of Kaspar Korjus, and the IAME Winter Cup winner Nicolas Rohrbasser third.

Over the three Qualifying Heats on Saturday, there was close racing with the grid shuffling several times as a result of the X30 Shifter standing starts. Piirimagi had some changes of positions but his incredible speed allowed him to retake first place in two and second place in one of the heats coming out still in first place for the prefinal. Kaspar Korjus similarly maintained his second place after one first, one second and one sixth. Third place following the qualifying heats, making it an unchanged top three despite all the position shuffles, was Rohrbasser.

The start of the prefinal looked as if Kevin Lüdi, slotting between one Piirimagi and Korjus, was going to be challenging, however he quickly lost positions and fell behind. The surprise of the race was the Belgian Thierry Delré, who had shown good speed in practice but had been plagued with problem until then starting from 7th place. Delré made a good charge consistently making places and eventually two laps from the end overtaking Korjus to secure a front row start for the final. After a front-bumper penalty for Korjus, the second row for the final went to Philip Seewer and Lüdi.

Piirimagi made sure he didn’t give any space to his competitors, taking the lead straight from the start and opening a gap of more than half a second each lap, eventually finishing a full 8.3 seconds clear. Behind him however there was an intense battle between Seewer whose flying start allowed him to jump to second, Delré, and Lüdi who seemed to have found a solution to the earlier problems with his pace. Seewer maintained second position for most of the race, however in the closing stages he was overtaken by Delré, and Lüdi. The race finished like this with Piirimagi taking the win, Delré second and Lüdi third.

In a constantly increasing grid, 51 Drivers entered the event for the junior category, making it the largest X30 Junior grid in the IAME Euro Series so far, and effectively having to divide into a 2-series Qualifying Practice and four groups for the Qualifying heats. IAME Winter Cup’s winner Mari Boya was the fastest in the first Qualifying Practice Series, however the second series proved faster with Georgi Dimitrov overtaking him for the first place and Lewis Gilbert getting the third.

Following six very intense Qualifying Heats on Sunday, Mari Boya came out in front winning all but one, with Lewis Gilbert also winning all but one. Van T’Hoff who had lost out in the combined series qualifying showed some good speed and consistency to come back to third.

In the prefinal, after an intense 11-lap long tussle between Gilbert, Lloyd, Boya and Van T’Hoff, the latter was the one crossing the line first, however he received a 5” penalty for his bumper being pushed back during one of the overtakes. This gave the first place to Gilbert, second to Boya and Third to Lloyd. In the meantime, Dimitrov who had dropped back during the Qualifying Heats made up no less than 14 places to finish 4th!

The final started with Gilbert taking the start but soon losing out to Lloyd. Quickly after Boya found the opportunity to take the lead while Gilbert dropped to third. Several position changes followed between the three which gave the space to Rimmo Kadapik and Luca Leistra to get in the mix. While Kadapik proved unlucky and dropped back together with Lloyd, Leistra didn’t let the opportunity to grab third place, with Dimitrov and Van T’Hoff following behind. The race finished with Gilbert taking the win, Boya second and Leistra third.

Even bigger than the X30 Junior grid, the X30 Seniors had 81 entries, which meant they had to be divided in three Qualifying Practice Series, and five Qualifying Heats Groups. In the combined Qualifying Series Kimber was the fastest, with Danny Buntschu second and the reigning FIA World Karting Champion Danny Keirle third.

X30 Seniors had the longest Saturday of all categories, with four intense Qualifying Heats each one, with Keirle coming out of it on the top of the classification with three wins and a second place, ahead of Kimber three wins and a third, and in third place Camille Prouteau with one win. In the prefinal, Keirle turned first but couldn’t hold his place, and was quickly overtaken by Kimber on the first lap, then Prouteau, and Van Pelt on the last lap.

The start of the final saw Kimber quickly take the start and disappear into the distance, while Keirle who quickly passed to second place on the first lap struggled to follow. Prouteau and Van Pelt couldn’t stay in touch with the leaders and it was instead the Dutch Joey Van Splunteren who come back from sixth to challenge Keirle for the second. Kimber made it look easy, finishing over 4 seconds ahead of Keirle, and Van Splunteren getting the last step of the podium.

The first points were awarded in the four categories with the respective winners Alejandro Melendez, Sten Piirimagi, Lewis Gilbert and Mark Kimber leading the way for the following three races. Next stop for the Euro Series will be in Mariebourg, Belgium on March 27.

As always, there was high quality live video stream and commentary coverage during all official sessions, which was available to stream worldwide, provided by RGMMC’s professional video crew. All races were made available on YouTube as well as interviews and highlights on RGMMC’s channel https://www.youtube.com/telemundimedia

Photos of all the leaders of every day, as well as race highlights by The RaceBox can be found on the websites of IAME Euro series www.iameeuroseries.com, Telemundi Media www.telemundi.com, and the IAME Euro Series Facebook fan page https://www.facebook.com/x30euro