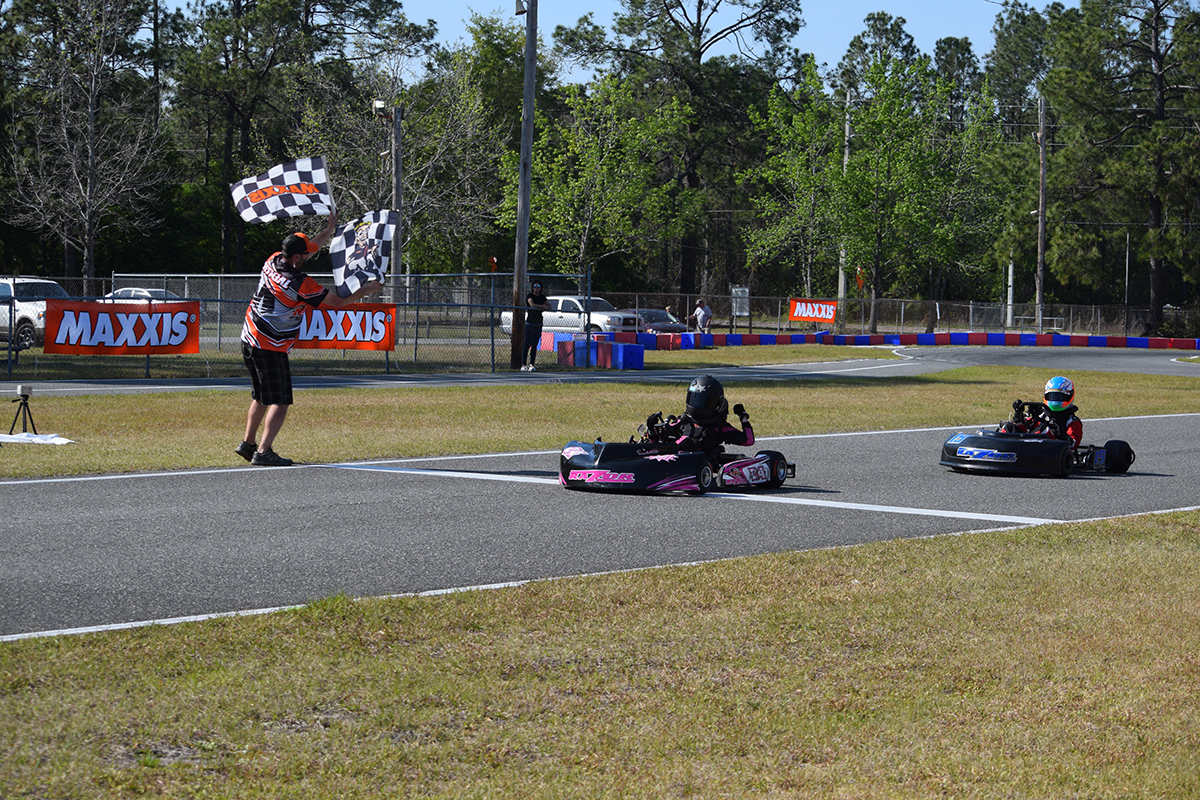 The long awaited debut of the newest program in the 4-Cycle Sprint world, Maxxis 4-Cycle Sprint Series, was greeted with the classic, warm Florida weather this past weekend at the famed 103rd Street Sports Complex in Jacksonville, Florida.

With a concept of building the kart count through utilizing the support of the local programs, the Season Opener had a strong substantial group of competitors from across the Southeast. The North Florida Kart Club, Georgia Sprint Karting Association, as well as competitors from Carolina Motorsports Park in Kershaw, SC,  converged on 103rd Street for a crack at the top of the podium.

The fierce competition was not limited to the adult classes. The impressive Lanie Buice turned the fastest lap times of the day and took the lead over her male dominant competition in the LO206 Cadet class sponsored by Brad’s Karts & Parts. With many of the Cadet competitors turned heads as they took to the powerful 1,000 foot backstretch and extremely tight turns in Jacksonville for the first time.  Cadets showed skillful driving years above their age throughout the final race. Buice edged Owen Lloyd, Cameron Weinberg, Brently Miller, and Peyton Bridges for the top five. Rounding out the top ten included Logan Buice, Mason Donahue, Alyssa Vascocu, and Carson Weinberg.

In the LO206 Masters main, sponsored by Diversified Plumbing Services, Justin Vanderzee came away with the top honor. In one of the final turns, Joey Miller and James Vanderzee went off course, giving Justin Vanderzee the clear lane to reach the checkered flag. Jerry Yarbrough followed closely behind Vanderzee to take the runner-up honors, while Barry Hastings snared the third spot on the podium. Kevin Medearis came home fourth and James Vanderzee was able to rebound for the fifth position.  Joey Miller, Tim Clark, Tyson Swann, Brad Farmer, and Todd Baron finalized the top ten.

Before LO206 Masters took to the track, one of the many young future hopefuls in the sport, Jaydyn Wilson mastered the 103rd Street oval in the Maxxis Kid Kart competition. From beginning to end,  Jaydyn displayed improved confidence and faster lap times with each passing moment on the track. While one of the many benefits to karting is watching great competition and full fields, the heartwarming part of the program is the development and passion of young drivers.

In the LO206 Junior main event presented by Brad’s Heating & Cooling, Alexander Searle came away with the first Maxxis national event win in this class, topping Will Meeler and Elmer Edmunson. Searle turned a quick 40.931 lap time over his competitors.

Zach Linsell took his LO206 All Pro kart to the track to top Tyler Swann for the win and took away a $500 payday from the feature class for the weekend. Swann cashed in $250 for his second place effort.

As the series prepares for Race #2 on April 14th at Carolina Motorsports Park, the Andy Jones Motorsports LO206 Senior Class will be gearing up for the $500 payday. Pre-registration will open on March 28th on maxxiskartracing.com/sprint-series.

The Maxxis 4-Cycle Sprint Series staff would like to extend our sincerest appreciation to all of the families and customers who supported the first event of the season. Congratulations to all the winners of the Season Opener! We look forward to seeing everyone at Race #2 on April 14th.